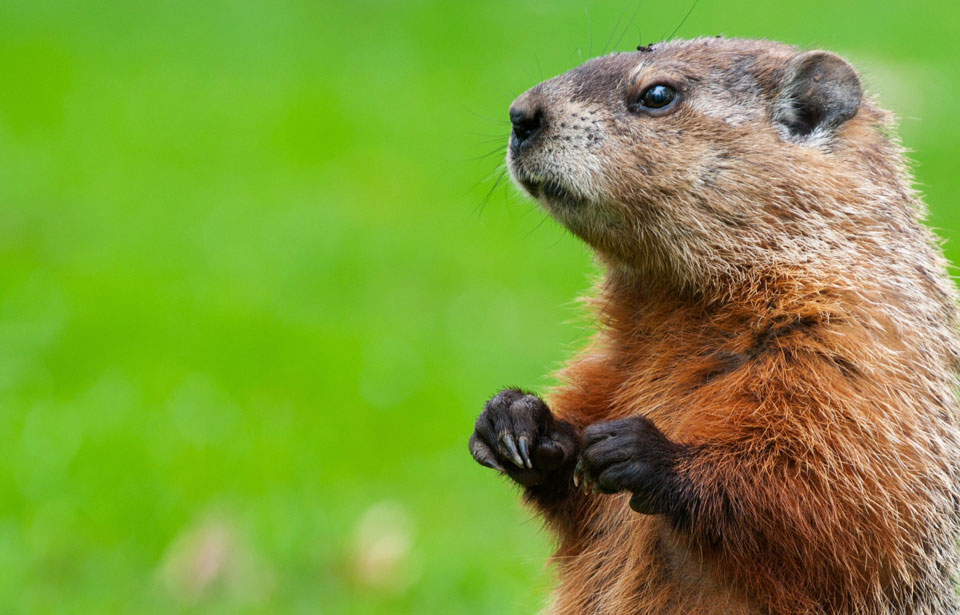 The woodchuck Marmota monax—sometimes called groundhog—is a rodent and belongs to the large group of mammals Rodentia, which includes squirrels, prairie dogs, and chipmunks. Within this large group the woodchuck is considered one of the marmots.

Among North American rodents, only beavers and porcupines are larger than the marmots. Woodchucks are stocky little animals with a flattened head. They commonly weigh 2 to 4 kg, and large ones may be heavier in the autumn. They measure 40 to 65 cm total length, including a short bushy tail about 15 cm long. Fur colour varies from place to place and between individual animals. It ranges from yellowish to dark reddish brown, with an intermediate brown colour being the most common shade. The fur is usually grizzled in appearance because of light-coloured tips on the hairs. The belly fur is commonly straw-coloured and the feet black.

Woodchucks are occasionally found with melanistic or albino fur. The fur of melanistic specimens is completely black. Albinos, on the other hand, have no colour in their fur at all, and even their eyes lack pigmentation, merely showing a pinkish tinge from blood vessels near the surface. Being white, they are conspicuous, and usually fall easily to predators.

Because woodchucks are burrowing mammals, their feet have sturdy claws and their legs are thick and strong. Their forefeet, the principal ones used for digging, each have four well developed claws, and the hind feet have five. They escape from enemies by diving into burrows, which may account for the fact that their top running speed does not exceed 15 km per hour.

A close relative of the woodchuck’s, the hoary marmot or whistler, lives in the mountains of western North America, from Washington, Idaho, and Montana northward into Yukon and Alaska. It inhabits tundra, alpine meadows, and rock slides in mountains. Two other marmots, very closely related to the hoary marmot, but differing from it in colour, live only on high portions of Vancouver Island and the Olympic Peninsula. The rockchuck, or yellow-bellied marmot, found from California, Texas, and New Mexico to British Columbia and southwestern Alberta, is another close woodchuck relative. Where the woodchuck is brownish, this somewhat smaller cousin tends to be yellowish. It favours rockier country and higher elevations (over 3 000 m) than the woodchuck, but it is also found on agricultural land in foothills and valleys.

Scientists recognize as many as nine varieties or subspecies of woodchuck, mainly based on subtle differences in colour or skull characteristics.

Woodchucks seem constantly on the alert when outside their burrows and give a shrill warning whistle when alarmed. When fighting, seriously injured, or caught by an enemy, woodchucks give a squeal. They also produce a sound by grinding their teeth. In addition, woodchucks can give a low bark, but the function of this particular sound is unknown.

Woodchucks prefer open areas such as fields, clearings, open forests, and rocky slopes. They generally dig their burrows in areas where luxuriant grasses and other short-growing plants provide food. They tend to avoid damp or swampy areas.

Summer burrows are often in the middle of pastures and meadows, and the animals will have a denning burrow, used only in the winter, in woody or brushy areas nearby. Winter burrows, whether separate or part of a woodchuck family’s main burrow system, are usually deep enough to be located below the frost level.

Burrows usually have a main entrance, one or more "spyholes" for added safety from enemies, and separate toilet and nesting chambers. The same nest is used for sleeping, hibernation, and as a nursery. It is made of dry grass in a chamber that may be 45 cm wide and over 30 cm high.

When not hibernating or caring for young, woodchucks spend much of their time eating and sunning. They love to stretch out on warm ground, a smooth rock or along a low branch of a convenient tree. Their tree climbing ability is limited, however, and infrequently used.

In preparation for their long winter sleep, or hibernation, woodchucks grow enormously fat towards the end of the summer. They begin hibernation with the onset of freezing weather, the adults before the young ones, who probably need extra time to put on sufficient fat to see them through the winter. The first adults to hibernate disappear late in September, and all woodchucks are underground in October.

Hibernation is a process of deep comatose sleep. Bodily functions are greatly retarded, allowing the accumulated body fat to nourish the animal throughout the winter. Body temperature may drop to 3°C (just above freezing), and the heartbeat will drop from its normal rate of about 80 beats per minute to only four or five. The breathing rate and consequent consumption of oxygen are also much reduced. When the animals emerge in the spring, they generally still have a good deal of body fat left. This is necessary because emerging in March, as many of them do, they find little food about them. They may even burrow up through snow to reach daylight. Several weeks may pass before the snow is all gone and there is abundant fresh green plant growth to eat.

Because they are among Canada’s largest true hibernators, woodchucks are the subject of a great deal of medical research. Scientists are studying their ability to lower their body temperature, reduce their heart rate, and reduce their oxygen consumption.

Woodchucks are the major hole-digging mammals over much of eastern North America, and in some places in the west. All sorts of animals are able to thrive because of the shelter supplied by woodchuck holes. The list includes a wide variety of fur and game animals, some of which destroy huge quantities of farm pests, such as rats, mice and insects. Skunks, raccoons, foxes, rabbits, and snakes all take shelter in woodchuck holes.

On the second of February each year, much of North America observes Groundhog Day. On that day, according to folklore, the woodchuck awakes from its long winter sleep and comes out of its den. If it sees its shadow it will go back in, and we will have another six weeks of winter. If it does not see its shadow it will remain awake and active, and we will have an early spring. This popular old legend apparently came to North America with early settlers from Europe, where it is believed in some parts that bears or badgers behave in the same manner. Although most people recognize that the legend has no basis in fact, it provides a welcome mid-winter diversion, which is usually promoted by the news media. In reality, most woodchucks do not come out of hibernation until March, or even later in the north.

Woodchucks are widely distributed in North America and are particularly common in the east where they are found from Alabama and Georgia in the United States to northern Quebec and Ontario. In the west, their range extends northward to Alaska and through southern Yukon and Northwest Territories. Woodchuck distribution is spotty everywhere on the edges of the range.

The woodchuck, like a small number of other animals (for example, the coyote), has prospered because of deforestation and agriculture. Before the felling of the forests of eastern North America, the woodchuck population was many times smaller than it is today. When large numbers of European settlers began to farm what had once been dense forest, woodchuck numbers skyrocketed among the woodlots, pastures, and cultivated fields. Although farming has been abandoned in many parts of eastern Canada, today’s landscape of mixed bush and pasture still suits these familiar burrowing mammals.

Woodchucks prefer to eat fresh green vegetation. They eat a wide variety of wild plants, clover and alfalfa, and garden vegetables if they can get them. On rare occasions, they eat snails, insects, or young birds that they come upon by accident. Early in spring they eat bark and small branches.

Young woodchucks are born in April and May (in Canada, mainly in May) following a gestation, or pregnancy, period of 30 days. One litter, usually with four young, is produced per year. Woodchucks are blind and helpless at birth, about 10 cm in length and about 30 g in weight. At about 28 days old, their eyes are open, and they are covered with short hair. They are weaned, or have made the transition from mother’s milk to solid foods, when they start to emerge from the burrow at five to six weeks of age. Woodchucks grow rapidly. They weigh 570 g at eight weeks of age and become very fat for hibernation. Woodchucks have been known to live for 10 years, although the average life span is probably much less.

Woodchucks are a natural prey for large carnivorous animals, such as bears, wolves, lynx, bobcats, and cougars; however, these major predators are scarce or absent in the predominantly agricultural landscape, where most woodchucks live. The principal woodchuck predators today are foxes, coyotes, and dogs. Woodchucks, curiously enough, can be fierce and determined fighters in defence of their lives and would probably be a match for any fox that was unable to take them wholly by surprise. There are many records of a woodchuck having held a dog the size of a collie at bay and driven it off.

Many farmers consider woodchucks to be nuisance animals, because of the vegetation that they eat, and because the piles of earth that they throw up while digging interfere with haymaking. Woodchucks do compete on a small scale with farmers’ cattle for food and occasionally get into people’s vegetable gardens. But the view that woodchucks are therefore pests, to be exterminated where possible, is nearly always a short-sighted one which overlooks the benefits of having the animals about.

To many hunters, particularly in eastern North America, woodchucks are valuable game animals. Some hunters simply waste the carcass of the animal they shoot, but a growing number are learning that fried, roasted, or stewed woodchuck can be tasty. Late summer and early fall are the common woodchuck hunting seasons. Sometimes woodchucks are trapped for their fur, but it is generally of low value. Many are killed on highways. Although not frequently tamed, the animals make affectionate pets.

Finally, woodchucks are a link with the wild for people who spend more and more time in artificial surroundings. Even just catching a fleeting glimpse from a car of one of these dumpy mammals standing by its roadside burrow can be a much-needed reminder of how satisfying it is to have wild animals around.