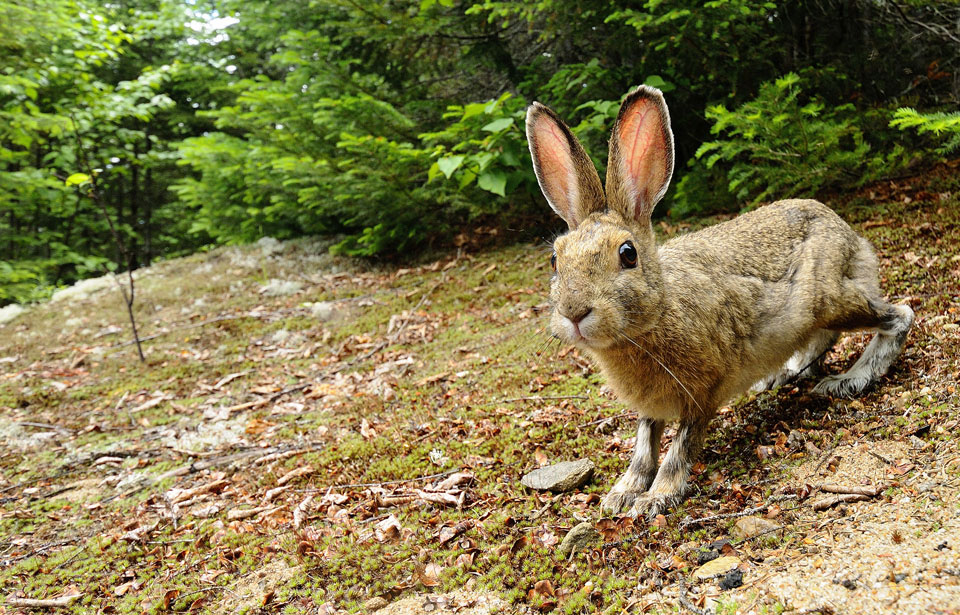 The snowshoe hare Lepus americanus, one of our commonest forest mammals, is found only in North America. It is shy and secretive, often undetected in summer, but its distinctive tracks and well-used trails (“runways” or “leads”) become conspicuous with the first snowfall.

Well-adapted to its environment, the snowshoe hare travels on large, generously furred hind feet, which allow it to move easily over the snow. In soft snow, the four long toes of each foot are spread widely, increasing the size of these “snowshoes” still more. A seasonal variation in fur colour is another remarkable adaptation: from grey-brown in summer, the fur becomes almost pure white in midwinter. The coat is composed of three layers: the dense, silky slate-grey underfur; longer, buff-tipped hairs; and the long coarser guard hairs. The alteration of the coat colour, brought about by a gradual shedding and replacement of the outer guard hairs twice yearly, is triggered by seasonal changes in day length. The snowshoe hare moults twice a year, beginning in August or September and in March or April. Generally, the hind feet retain patches of white fur into the summer. In the humid coastal zones of southwestern British Columbia, Washington, and Oregon, where snow is infrequent, snowshoe hares remain brown throughout the year.

The snowshoe hare’s ears are smaller than most hares’. The ears contain many veins, which help to regulate body temperature; for example, desert hares have very large ears with almost no fur, so the blood can cool in the slightest breeze. Because snowshoe hares live in cold environments, they do not need such big ears to help lower their body temperatures.

Snowshoe hares are generally silent, but they can show annoyance by snorting. On the rare occasions when they are caught, they utter a high-pitched squeal, which sometimes causes surprised hunters to drop them. During the breeding season, bucks and does (males and females) make a kind of a clicking noise to each other. Does also use this sound to call their young to them for nursing.

The snowshoe hare lives in boreal forest, the northernmost forest in the Northern Hemisphere. Its range also extends into mountains in the United States. In eastern Canada and mountainous areas, the forest is predominantly coniferous (spruce and fir), whereas over large expanses of Alberta, Saskatchewan, and Manitoba, the forest is mainly deciduous (aspen and balsam poplar). Snowshoe hares use many forest types. Overall, they prefer areas with a dense understory, or layer of plants below the main canopy of the forest, whether that is formed by young trees or by tall shrubs. This cover helps to protect them from predators and provide them with food.

The home range of a snowshoe hare—the area within which it normally lives—is approximately 6 to 10 ha. Within that range, the hare has an intricate network of trails that criss-cross its territory. These trails, which take the hares between feeding and resting places, are well-travelled, both by the hares and by other species, like squirrels, porcupines, and skunks. Major runways follow the same routes in summer and in winter, and the snowshoe hares keep the trails well-maintained, quickly clipping off stems and leaves which begin to block the runways; they may need these routes to escape predators.

Snowshoe hares are very active between sundown and dawn, and they remain active all winter. Rain, snow, or wind often markedly reduce the hares’ activity. During the daytime, the snowshoe hare rests quietly in sheltered spots called “forms,” under a bush, stump, or log. It dozes fitfully and grooms itself by licking its fur, but it is always alert.

If it is threatened, the snowshoe hare may freeze to take advantage of its camouflaging coloration, or it may flee. Snowshoe hares younger than two weeks, which cannot yet move swiftly, remain immobile. Older snowshoe hares are likely to flee; often, they will see predators before being seen, and can move away undetected. They travel by bounding, sometimes covering 3 m at a time, and they can travel as fast as 45 km/h. This is one way in which hares differ from rabbits—while hares are likely to run to escape predators, rabbits will dash to underground warrens and hide in them; hares rarely go underground. Linked to this difference in behaviour are some anatomical differences, including the hare’s bigger heart, which helps it run.

The spectacular cyclic fluctuations of snowshoe hare populations are well known. These remarkably regular fluctuations, which are about 10 years long, can be traced back over 200 years in the fur records of the Hudson’s Bay Company. At the population peak, hares can be extremely abundant, reaching densities of 500 to 600 hares per square kilometre. Population peaks occur roughly at about the same time, throughout the snowshoe hare’s range, although the timing of peaks may vary by one to three years between regions. Population declines are largely caused by predation. Distribution of the snowshoe hare

The snowshoe hare is found in every province and territory in Canada. It lives in the boreal forest and the southern extensions of this forest, along the Appalachian Mountains in the east and the Rocky and Cascade mountains in the west. The snowshoe hare is found as far south as North Carolina, New Mexico, and California. To the north, it reaches the Arctic Ocean in the willow swales, or depressions, of the Mackenzie River delta.

Snowshoe hares consume a variety of herbaceous plants during the summer, including species like vetch, strawberry, fireweed, lupine, bluebell, and some grasses. They also eat many leaves from shrubs. Their winter diet consists of small twigs, buds, and bark from many coniferous and deciduous species. Their geographic range is so large that snowshoe hares in different regions may have completely different diets, depending entirely on the local forest type.

The hares often stand to clip shrubs up to 45 cm from the ground, and as the snow builds, they can clip higher and higher. In peak population years, snowshoe hares may kill saplings and shrubs by girdling, or taking rings of bark from the plants. Snowshoe hares occasionally scavenge meat from the carcasses of other animals. Most small herbivores, including mice, voles, and rabbits, will eat meat occasionally if it is available—good sources of protein are rare in plant foods, so most herbivores eat meat when they can.

Snowshoe hares start breeding during the spring after their birth. The breeding season begins about mid-March with courtship parades. Each female is receptive to males for about 24 hours, first in March, and then the day after giving birth to each litter—two to four times during the summer. During that day, females and males often travel together while foraging, with interludes of active chasing and jumping over each other. Females often breed with several males.

Snowshoe hares are born fully furred with their eyes open, and they are capable of hopping about almost immediately. Such precociousness is characteristic of hares in general, and is in marked contrast to young rabbits, which are born naked and blind. Young snowshoe hares nurse only once a day, usually in the evening, and are self-supporting at three to four weeks of age. They weigh between 45 and 75 g at birth, gain 450 g within a month, and reach the average adult weight of 1.4 kg by five months.

The snowshoe hare suffers from many diseases—viral, bacterial, and parasitic. It is also the victim of many predators: among the most common are the Canada lynx, red fox, coyote, mink, Great Horned Owl, and Northern Goshawk. Snowshoe hares younger than two weeks of age are killed primarily by red squirrels and ground squirrels. Between 1 percent and 40 percent of snowshoe hares survive each year; the rate varies with the 10-year population cycle. Although snowshoe hares can live to six years old, very few survive that long; they are extremely lucky if they make it to their second summer of breeding.

The snowshoe hare is the most important small game animal in Canada. It is a mainstay in larders of Aboriginal peoples, and on the island of Newfoundland, where it was introduced in the 1870s, thousands of snowshoe hares are snared each year for meat, and they are sold in markets. In the Prairie provinces, on the other hand, non-Aboriginals are reluctant to eat hares. This prejudice apparently stems from the widespread belief that the animals harbour a mysterious disease which causes their cyclic decline.

As one of the dominant herbivores and key prey species within the boreal forest, the snowshoe hare contributes to this ecosystem’s diversity. Because they are a frequent prey item, snowshoe hares are critical to maintaining the food web in our forests; indeed, research in Yukon has demonstrated that the snowshoe hare may be a keystone, or central, species. Logging, fire, habitat conversion, and global warming are changing the distribution and quality of forested habitats. The 10-year cycle in snowshoe hares and their predators is a unique, dominant, and large-scale pattern in Canadian forests, and we do not know how habitat alteration will affect it.

Banfield, A. W. F. 1974. The mammals of Canada. University of Toronto Press, Toronto.