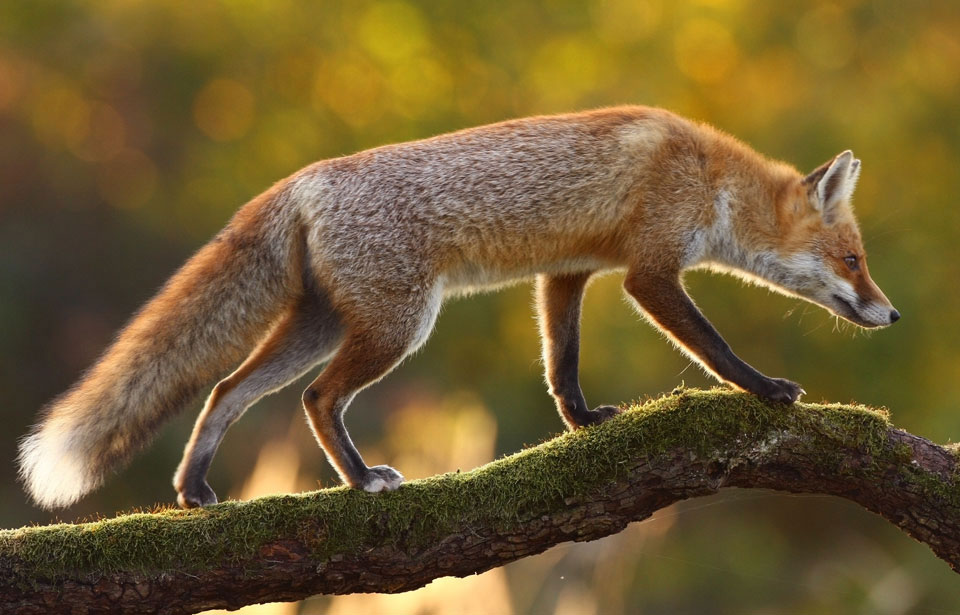 The red fox Vulpes vulpes is a small, dog-like mammal, with a sharp pointed face and ears, an agile and lightly built body, a coat of lustrous long fur, and a large bushy tail. Male foxes are slightly larger than females. Sizes vary somewhat between individuals and geographic locations—those in the north tend to be bigger. Adult foxes weigh between 3.6 and 6.8 kg and range in length from 90 to 112 cm, of which about one-third is tail.

Although "red fox" is the accepted common name for the species, not all members of the species are actually red. There are several common colour variations, two or more of which may occur within a single litter. The basic, and most common, colour is red in a variety of shades, with a faint darker red line running along the back and forming a cross from shoulder to shoulder on the saddle. Individuals commonly exhibit some or all of the following markings: black paws, black behind the ears, a faint black muzzle, white or light undersides and throat, a white tail tip, and white stockings.

Other common colours are brown and black. Red foxes that are browner and darker than most of their species and have a cross on the saddle that is dark and prominent are sometimes referred to as "cross foxes." Red foxes that are basically black with white-tipped guard hairs in varied amounts are known colloquially as "silver foxes." Silver foxes are particularly valued by the fur trade, and large numbers were selectively bred in captivity when fox fur clothing was popular.

Red foxes have a sharp bark, used when startled and to warn other foxes.

Red foxes inhabit home ranges of 4 to 8 km2 around den sites. Pairs of adult foxes may separate during the winter, especially if hunting is poor, but they come together again in the later winter or early spring for breeding and denning. From autumn until March of the next year, the foxes take shelter in thickets and heavy bush, even during the coldest winter weather.

Red foxes have been called bold, cunning, and deceitful, particularly in children’s stories. In fact, they are shy, secretive, and nervous by disposition, and they appear to be very intelligent.

Young foxes travel widely during autumn seeking new territories. Young males have been traced as far as 250 km from their birth sites.

Red foxes have excellent eyesight, a keen sense of smell, and acute hearing, which help them greatly when hunting. The slight movement of an ear may be all that they need to locate a hidden rabbit. They can smell nests of young rabbits or eggs hidden by long grass. Sometimes they wait patiently for the sound of a mouse moving along its path in grass or snow and then pounce. At other times, hearing movement underground, they dig quickly and locate the prey by its scent.

Foxes belong to the same family, the Canidae, as domestic dogs, coyotes, and grey wolves. Taxonomists, or experts who classify living organisms, once thought that the North American red fox was a different species from the smaller fox of southern Europe. It is now known, however, that they both belong to the same species. The range of Vulpes vulpes is continuous across Europe, Asia, and North America, and the species is expanding its range in North Africa and Australia, where it was introduced a century ago by British fox hunters.

Red foxes are one of Canada’s most widespread mammals, found in all provinces and territories. There are probably more red foxes in North America now than there were when Europeans began to arrive in the 16th century. Scientists believe that the range and numbers of the red fox expanded at that time because the pioneers created additional habitat for these small mammals by thinning the dense forests and killing many of the wolves that had kept fox numbers down.

Probably red foxes eat more small mammals—voles, mice, lemmings, squirrels, hares, rabbits—than any other food, although they supplement this with a wide variety of other foods, including plants. Their diet changes with the seasons: they may eat mainly small mammals in fall and winter, augmented in spring with nesting waterfowl, especially on the prairies, and in summer with insects and berries. They have been seen feasting on eggs and chicks of colonies of nesting seabirds, and will take other birds, and their nestlings and eggs, when they can get them.

Red foxes have been known to eat and feed to their young lake trout weighing 1.5 to 3 kg, which they caught by leaping from the shore onto fish schooling in shallow water. They eat a wide variety of other items, including seal pups, beaver, reptiles, fruits of all sorts, and garbage. They will frequently bury or hide surplus food for later use, but other animals often find and use it first.

Foxes have a bad reputation as chicken thieves, and they will in fact invade poultry yards when it is safe and easy to do so. On farmlands, however, they more than compensate for the odd chicken by eating vast numbers of crop-destroying small mammals and insects, and they are now usually appreciated by farmers.

Red foxes hunt by smell, sight, and sound, as do most dogs. They have excellent eyesight, and the slight movement of an ear may be all that they need to locate a hidden rabbit. They have a keen sense of smell and acute hearing. They can smell nests of young rabbits or eggs hidden by long grass. Sometimes they wait patiently for the sound of a mouse moving along its path in grass or snow and then pounce. At other times, hearing movement underground, they dig quickly and locate the prey by its scent. They hunt mostly toward sunset, during the night, and in early morning.

Dog foxes (males) and vixens (females) are usually, but not always, monogamous, or have only one mate. Two or more dogs often court a single vixen, and scientists have records of one den where three adult foxes tended a single litter of cubs. Home ranges around den sites are 4 to 8 km2 in size.

Foxes breed between late December (in warmer areas) and mid-March. After breeding, the foxes seek a suitable den, which is often an abandoned woodchuck burrow, but may also be the burrow of another mammal, a cave, a hollow log, a patch of dense bush, or a customized excavation under a barn or other structure. Small knolls in fields, streambanks, hedge and fence rows, and forest edges are favoured locations. Dens in earth are usually lined with dry material, such as grass or other leaves, to insulate the cubs from dampness and cold. Dens sometimes have more than one entrance, to permit escape from danger. They are often south-facing, with good visibility from the main entrance, and are usually in dry, sandy soil. An undisturbed den may be used by foxes for many years. A single pair of foxes may have two or more dens close to each other. They will sometimes move litters of pups from one den to another to escape danger, although at other times they do so for no apparent reason.

Pups are born from March through May. Litter size may range from one to 10 pups, but the average is five. The young are blind at birth, their eyes opening during their second week. Red foxes are patient, solicitous, and sometimes playful parents. The vixen takes great care of the very young cubs before their eyes are open and at this stage usually keeps the dog fox from entering the den, although he will hunt for the family. After the cubs’ eyes are open and they begin to crawl, the dog fox will relieve the vixen while she hunts.

At one month, the cubs are weaned, or have made the transition from their mother’s milk to other foods, and begin to play about the den entrance. Both parents hunt for themselves and bring back small game for the cubs to play with. In this way, the cubs learn the smell of the prey and how to eat it. For as long as two months the adults feed the cubs at the den site and train them to hunt, by stalking mice in the long grass. The cubs practise hunting under the eyes of the adults. When the young are able to feed themselves, usually at about three months of age, they leave the den site alone.

From autumn until March of the next year, the foxes bed down in thickets and heavy bush, even during the coldest winter weather. If successful in surviving their first winter and in finding a territory, the young foxes may breed the following spring. Pairs of adult foxes may separate during the winter, especially if hunting is poor, but they will come together again for breeding and denning.

Humans are probably the most important predator of foxes. In the past, people considered red foxes pests, because they eat poultry, as well as game birds and small mammals that people also hunt, so governments offered rewards, or bounties, for killing foxes. The effectiveness of bounties in keeping down populations of mammals is doubtful, especially in the case of foxes, which produce five or more young every year. Fortunately, most people now recognize that the benefits that farmers derive from having foxes around far outweigh any damage that they do, and bounties have mostly been dropped. In recent years, too, long-haired fur has greatly increased in value, and red foxes are worth a lot of money to trappers.

Management of foxes in North America mainly consists of prohibiting hunting or trapping during the season when young are being raised, and until early winter when the fur is prime for trapping. Nuisance foxes are often destroyed on a local basis.

Wolves, coyotes, and dogs will chase and sometimes kill foxes when the opportunity presents itself. Interspecific strife with coyotes may be the reason that foxes usually occur close to human habitation in prairie areas. In some areas of British Columbia, Ontario, Quebec, New Brunswick, and Nova Scotia, coyotes have been aggressively occupying new range for several decades and perhaps displacing red foxes. Bobcats, lynxes, and probably cougars may prey on red foxes. Other mammalian predators, such as bears, are likely not agile enough to catch foxes, except accidentally. Although eagles and large owls are capable of preying on foxes, there is little evidence that they do so.

Foxes have occasionally become a serious menace to public health, particularly in rural areas, when epidemics of rabies sweep through wild mammal populations. During epidemics, attempts are sometimes made to control the populations of foxes, raccoons, skunks, and other mammals that carry the disease. In Ontario, some advances have been made in the immunization of wild fox populations against rabies by dropping baits containing vaccine near den sites.

Because the disease is almost invariably fatal in humans once the symptoms are in evidence, rabid foxes should be avoided. When rabid, the normally shy and elusive red fox shows no fear of people, is often seen in daylight, and may foam at the mouth in advanced stages of the disease. Children should be warned to avoid bold or apparently friendly foxes. Rabies is transmitted through the bite of an infected animal. If a person is bitten, the wound should be washed immediately, and a doctor should be seen on an emergency basis. Rabies is a reportable disease and as such must be reported to the nearest veterinary authority, usually the District Veterinary Officer of the Animal Health Division, Food Production and Inspection Branch of the federal Department of Agriculture and Agri-Food. The brain of the animal involved should be submitted immediately to a Federal Veterinary Laboratory. Delay could result in the death of the person bitten.