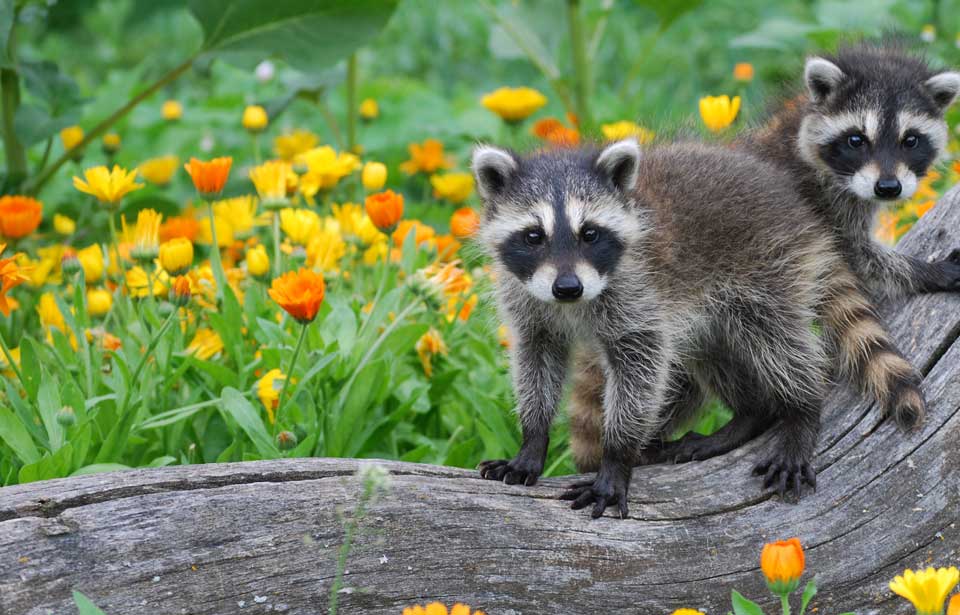 The common raccoon (Procyon lotor) is probably best known for its mischievous-looking black face mask. Raccoons are usually a grizzled grey in colour with a tail marked by five to 10 alternating black and brown rings. Body coloration can vary from albino, (white) to melanistic (black) or brown. An annual moult, or shedding, of the fur begins in the spring and lasts about three months.

The head is broad with a pointed snout and short rounded ears measuring 4 to 6 cm. The eyes are black. Total body and tail length for adults averages 80 cm; males are generally 25 percent larger than females. Raccoons in northern latitudes tend to be heavier (6 to 8 kg) than their southern counterparts (4 kg). However, fall weights for adults have reached 28 kg in some areas.

Raccoons are able to live in a wide range of habitats. The only apparent requirements are a source of water, food, and a protected area for denning. The best habitats are hardwood swamps, floodplain forests, fresh- and saltwater marshes, and farmland, both cultivated and abandoned. On the prairies, raccoons are most abundant in woodlot and wetland areas. This highly adaptable animal is also very common in many cities of North America.

Movements and home ranges of raccoons vary greatly depending on habitat, population density, and food supply. The home range is the area used by an animal for food, water, and shelter in its normal, day-to-day movements. In rural agricultural areas of eastern North America, home ranges between 1 and 4 km2 are common, whereas in prairie habitat, raccoons have used areas as large as 50 km2. At the other extreme, the area used by urban raccoons has been documented at less than 0.1 km2. Generally, home ranges of individual raccoons overlap, and there is little evidence of territoriality, especially in urban areas.

Winter denning allows the raccoon to conserve energy in the form of fat reserves when food is not available. This is not hibernation, but a period of inactivity. The body temperature does not drop, and the animal’s activity appears to be governed by the air temperature. Preferred denning sites include hollow trees, stumps, logs, caves, vacant groundhog or fox burrows, and buildings such as barns. In city areas, denning sites include residential chimneys, sewers, garages, attics, trees, and culverts. Adult males usually den alone, but the family unit often dens together during the first winter. Communal dens containing as many as 23 raccoons have been reported; however, four to five is more common. Although usually one den is used during the winter, several different dens provide sanctuary during other seasons.

Six species of raccoons occur in North, Central, and South America as well as on some of the Caribbean Islands. However, Procyon lotor is found only in southern Canada, portions of the United States, and Central America.

The species inhabits all provinces of Canada except Newfoundland and Labrador and is gradually expanding its range northward as land is cleared for agricultural purposes. During the 1930s the raccoon was successfully introduced into Germany and the Soviet Union. Today, its range has expanded to include Luxembourg, West Germany, the Netherlands, and France.

Raccoons are omnivorous and will consume practically any food item, plant or animal. They prefer corn, crayfish, fruits, and nuts, but there is a seasonal shift in diet depending on availability of food items. During the spring, animal matter, including invertebrates, or small animals without backbones, and insects, makes up the major portion of the diet. While they prefer crayfish, raccoons also consume muskrats, squirrels, rabbits, waterfowl eggs, and freshwater clams. In the summer, plant material, including fruits and nuts, becomes more important. Wild cherries, gooseberries, elderberries, wild grapes, strawberries, and garden items such as potatoes and sweet corn are relished. They also eat frogs, small fish, turtles, beetle grubs, grasshoppers, earthworms, crickets, and snails during the summer.

Corn is the mainstay of the fall diet in most areas where it is available; however, acorns, beechnuts, hazelnuts, and grapes are also consumed. Raccoons raid the nests of insects, including hornets, bumblebees, termites, and ants, mainly for the larvae, or immature stage. The raccoon’s thick fall and winter coat protects it from the stings of irate adult hornets or bees.

The fall diet is extremely important for raccoons in northern latitudes because they must accumulate sufficient fat reserves to sustain them during winter denning. The raccoon builds up fat over its entire body, even around the tail bone. It may be 2.5 cm thick on the back. In fact, by late fall about half of the animal’s total body weight may be fat. In northern areas the raccoon lives on its stored body fat during the winter, but farther south where nuts and corn are plentiful it continues to hunt for food year-round. In suburban areas, raccoons often raid garbage bins or hunt for earthworms, beetles, and grubs on residential lawns. Raccoons can also be a menace to farmers because they may eat domestic fowl and eggs.

The breeding season generally begins in late January or early February in the northern parts of the raccoon’s range. Mating tends to take place in March in most areas. Birth of offspring peaks during May, although births have been recorded as early as March or as late as September. Year-round breeding has been reported for raccoons in southern areas.

Male raccoons are polygamous, or will mate with several females in succession. Females, however, are monogamous, and will mate with only one male and will not tolerate other males after mating has occurred. Juvenile females often breed during their first year. Juvenile males, although capable, usually do not have the opportunity to mate until their second year because of competition from adult male raccoons. Litter sizes tend to be larger in the northern part of the range. Between three and seven young per litter are common in northern latitudes; however, litters of two or three young are usually the rule in southern areas. The gestation, or pregnancy, period averages 63 days.

Raccoons are born without teeth and with eyes closed, and they weigh approximately 75 g. The eyes open at two weeks of age, and the teeth erupt at about 19 days. By about 10 days of age the young are already sporting the familiar facial mask and colour patterns typical of the species. The young remain in the maternity den for about eight weeks and then leave to hunt for food with the female, although they still nurse from time to time for almost two months. The adult male plays no role in raising the young.

The life span of raccoons in the wild is estimated at three to five years; most populations are completely replaced over seven years. However, longevity records of 12 and 16 years have been noted in captivity and in the wild, respectively.

Humans are the major predator of the raccoon. They prize its fur and take between 2 and 4 million pelts annually in North America. As well, automobiles kill thousands of raccoons each year. Another major source of mortality is disease. Since 1983, several thousand raccoons have succumbed annually to rabies in the mid-Atlantic and southern United States. The disease is currently spreading north toward Canada. As well, thousands of raccoons die annually from canine distemper, particularly in eastern Canada and the United States. Parasites such as lice, fleas, and ticks are often found on raccoons, but do not appear to be a significant source of mortality.

Other raccoon predators include pumas, bobcats, coyotes, foxes, dogs, wolves, Great Horned Owls, and fishers. However, they are only a minor source of mortality. Malnutrition and harsh winter weather play a greater role in limiting raccoon populations, especially juvenile animals.

Although some records show that raccoons may be long-lived in the wild, many animals succumb during the first year of life to disease, starvation, wild predators, and trappers. In some areas annual mortality rates for raccoon populations have been estimated at 50 to 60 percent.

The raccoon variant of rabies, otherwise known as “raccoon rabies,” is a fatal disease and is considered a viral infection. It is primarily transmitted through saliva via bite wounds, but can also spread if saliva comes into contact with an open wound, eyes, mouth or mucous membrane. It was first reported in Canada in eastern Ontario July 1999. It was next reported in New Brunswick during 2000, and in Quebec during 2006. In 2007, there were 59 cases of rabies reported in Canada, making it the third most infected animal of that year. Ontario and New Brunswick have controlled the disease with a variety of tactics including vaccination programs. However, currently, the disease is epizootic in Quebec with 58 cases being confirmed during 2007.

Raccoons can also carry a roundworm parasite called Baylisascaris procyonis. It is very pathogenic in humans. The eggs are shed in raccoon feces and are almost indestructible. Roughly 12 people are thought to have died as a result of this parasite — mainly children.

Some people see the raccoon as a wily and persistent pest. Raccoons often cause significant damage to agricultural crops such as corn and lesser damage in orchards, vineyards, melon patches, and poultry yards. They are considered undesirable in areas being managed for waterfowl or upland game birds because they destroy nests and eat young. In urban areas considerable damage to residential roofs, garages, gardens, and lawns has been blamed on raccoons. Often the only solution is to remove the offending animals by trapping or hunting. Problem animals are often live trapped and moved to other localities. This practice, however, may contribute to disease transmission. Recent studies have shown that relocated raccoons travel long distances in short periods and are thus an ideal vehicle for transmitting contagious diseases such as rabies.

Habitat improvement for raccoons should include the provision of denning sites such as hollow trees and logs and the planting of crops such as corn as a source of food. However, in city areas little habitat management is needed because the raccoon adapts readily to human-made structures for shelter or sanctuary. Raccoon populations are thriving in most areas, and the species appears secure from any population decline in the foreseeable future.

© Her Majesty the Queen in Right of Canada, represented by the Minister of the Environment, 1989. All rights reserved.
Catalogue number CW69-4/47-1989E
ISBN 0-662-17061-X
Text: Richard C. Rosatte; Updated by Bradely Turcott with revisions by Rick Rosatte in 2008.
Photo: Robert McCaw