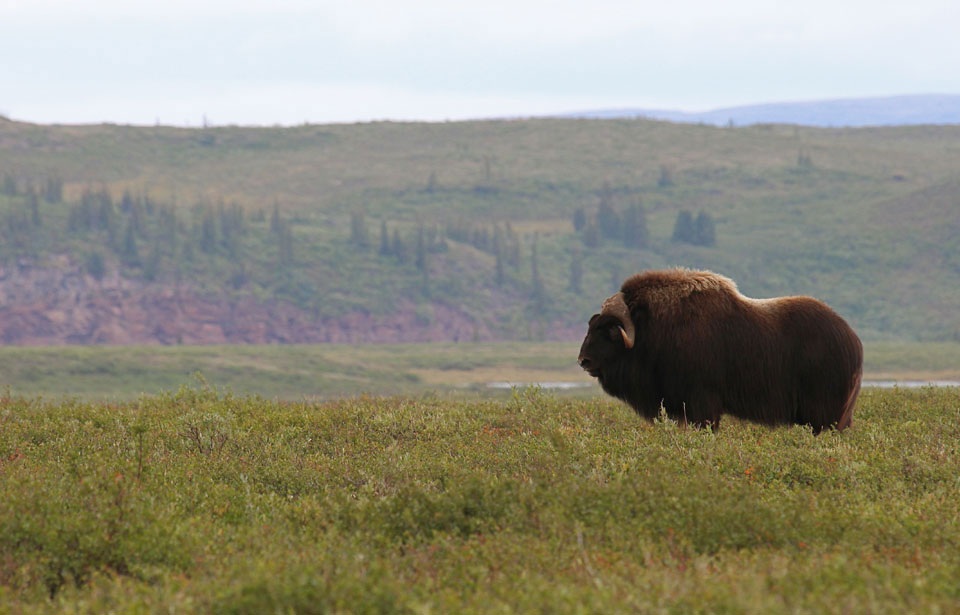 The muskox Ovibos moschatus lives on Canada’s arctic tundra. Superficially the muskox resembles the bison: humped shoulders and a long black coat accentuate the shortness of its legs. In fact, it is more closely related to sheep and goats.

Although not very tall—the shoulder hump of a standing bull reaches only to about the chest height of a person—muskoxen are relatively heavy owing to their stocky and compact build. The few weights of wild muskoxen available indicate that adult bulls weigh 270 to 315 kg and cows about 90 kg less. Usually slow and deliberate in its movements, the muskox can run and climb with great agility if the need arises.

Both cows and bulls have impressive horns. The horns curve downward toward the face, then out and up at the slender tips. On the bulls, the base of each horn extends across the forehead to meet as a solid "boss" of horn and bone up to 10 cm thick. A patch of fur on the forehead separates the less massive but equally sharp horns of the cow. Almost hidden in the wool in front of the eyes is a small scent-producing, pre-orbital gland.

The muskox owes its ability to function normally in temperatures of -40°C in high winds and blowing snow, in large measure, to its amazing coat. The coat has both a woolly layer and a hairy layer. The insulating woolly layer is next to the skin. The wool, or "qiviut," is stronger than sheep’s wool, eight times warmer, and finer than cashmere. The coarser hairy layer that covers and protects the wool grows to be the longest hair of any mammal in North America. The Inuit name for muskox is omingmak, "the animal with skin like a beard."

In midsummer, muskoxen lose their woolly undercoats. The long guard hairs are not shed at the same time. The animals become shaggy and ragged-looking for a few weeks. Many adult bulls have clumps of old wool clinging to their "skirts" and manes throughout the year.

The muskoxen’s rounded hooves are another physical adaptation to its environment. They spread enough to help prevent the animal sinking into soft snow, although they are not as broad as those of caribou. The front hooves are larger than the hind hooves and enable the muskox to dig through the snow for food.

During the breeding season bulls frequently utter deep, rumbling roar-like bellows that serve as a challenge to other males.

Muskoxen are generally found in the low-lying coastal and inland plains or river valleys of the Arctic, where shrubs are most abundant. During the long summer days, ground-hugging plants grow quickly, producing colourful blooms and rich forage for muskoxen, caribou, and lemmings.

Around calving time, the large winter herds break up into smaller loosely organized herds of about seven animals. Throughout the summer, these herds alternate periods of feeding and periods of resting. During a resting period, muskoxen lie down to ruminate (chew their cud, or partly digested food) or sprawl on their sides with their legs extended, often on remaining snowbanks. The calves, instead of resting, usually band together and gallop around the adults or engage in vigorous, playful butting contests. Adults also play on occasion, especially when crossing rivers. Jumping and whirling around in shallow water is typical of adult muskox play.

Although bulls engage in butting contests and more vigorous fights at most times of the year, the frequency and intensity of these conflicts increase in late summer as the bulls strive to determine dominance of a herd. A typical clash consists of, first, threat displays, in which the bulls rub their pre-orbital glands against the ground or their foreleg, then walk slowly in a "strutting" manner with the horns tilted towards the opponent. Next, both back away slowly, swinging their heads, then charge forward, meeting head-on with a resounding crash. This terrific impact is absorbed by the great thickness of the horns and skull. If the two muskoxen are well matched, several charges follow and the outcome may depend on less formalized head-to-head pushing, wrestling, and hooking after the charging.

In winter, the muskoxen pursue their daily activities in large mixed herds. In the High Arctic the sun does not appear above the horizon between November and February. The arctic winter is extremely long; temperatures are below -18°C for up to eight months. Despite the cold, wind, and dark, the muskox disrupts its normal feeding and resting patterns only during severe storms, which it endures lying down, back to the wind.

Late winter and early spring are critical times for muskox survival. Fat reserves may be low or depleted and any combination of old age, worn teeth, heavy parasite infestation, or poor range and weather conditions, such as impenetrable crusts of snow and unusually fierce storms, may result in death by starvation.

People and muskoxen have a long tradition of coexistence. From prehistoric times to the present, this shaggy mammal has provided the Inuit with meat, warm sleeping robes, and horn used in the manufacture of weapons and implements. By using dogs to keep the muskoxen from running, the Inuit took advantage of the defence formation (see sketch) and were able to kill muskoxen with their bows and spears.

The muskox also gave spiritual gifts to the Inuit. The people of western Hudson Bay have an old story of how two muskoxen provided the hunters with a song. These muskoxen had taken off their skins and were standing rubbing the skins to soften them and singing praises of their country. They sang of how beautiful the land was and how in summer they could always see the sun. While they were singing they heard a pack of dogs. Quickly they put on their skins and went up a hill where they thought they could defend themselves. Soon after they reached the top, the hunters came and killed both animals and took the song for their own.

If attacked by wolves, muskoxen run to an area of shallow snow or high ground and line up facing the attackers. Surrounded, the muskoxen press their rumps together, forming a tight ring from which bulls or cows charge out at the wolves. During a wolf attack, each calf runs quickly to its mother and presses tightly against her side. Facing the wolves, the adult muskoxen, especially the bulls, vigorously rub the preorbital glands against the foreleg. This action seems to be threat to the attackers and a warning to other herd members. Fossil evidence suggests that the ancestors of the muskox crossed the Bering land bridge to North America about 90 000 years ago and survived glacial times away from prehistoric people in ice-free areas (called "glacial refugia") in the northern arctic islands and Greenland. With the retreat of the glacial ice, muskoxen spread through northern Canada and Greenland, then westward into Alaska.

Today there are naturally occurring populations (as opposed to "introduced" populations) of muskoxen only in Greenland (about 20 000) and northern Canada. Most of Canada’s 85 000 or so muskoxen are found on the arctic islands, especially Banks and Victoria islands. The mainland population of approximately 14 000 is located in the areas north of Great Bear Lake, around Queen Maud Gulf, and in northeastern Keewatin. There is an introduced free-ranging population in Quebec. In addition, muskoxen from an introduced population in Alaska are regularly seen in northern Yukon. There are also introduced muskox populations in Svalbard (a group of islands north of Norway), Western Greenland, Norway, and Russia.

On the mainland, muskoxen feed extensively on the shrubby willows that follow the river courses. Here they find some protection from the mosquitoes and biting flies that attack their unprotected eyes. On the arctic islands they are less bothered by biting insects as they feed in the wet meadows.

By September, snow covers the ground and muskoxen must dig craters through the snow to find the willows, grasses, and sedges that form the major part of their diet. In most areas on the tundra the snow cover is relatively shallow and does not usually impede feeding and movement. Muskoxen often feed in valleys or lowlands where the snow is less than 20 cm deep. Here the wind shifts the snow constantly and hardens the crust until it easily supports an adult human being. When the crust makes pawing difficult, the muskox breaks through it by lifting and dropping its head onto the crust. The animal pushes the broken chunks of hardened snow away by pawing and exposes the vegetation below. Dominant muskoxen often displace individuals of low rank from these feeding craters.

The keen sight of the muskox is beneficial during the long winter darkness, and its acute sense of smell enables it to find food beneath the snow that covers everything from September to June.

In late spring and summer the herds are of mixed ages and sexes. As the time to breed approaches, the composition of some herds changes from equal numbers of bulls and cows to a situation of one adult bull (known as the lead or herd bull) with several cows, calves, and subadult bulls. Many other adult bulls leave the herd as a result of conflicts with the dominant bull. They become solitary, or join other bulls until the breeding season is over.

During the late summer breeding season, bulls frequently utter deep rumbling roar-like bellows to challenge other males. They engage in elaborate fights or clashes to determine dominance and possession of a herd.

In the northern islands, muskox calves are born between April and June; at this season the snow cover is deepest, temperatures may reach -34°C, and snowstorms are common. Cows, starting at about age four, produce one calf every year under good conditions. The calf is born with a thick woolly coat and can stand upright within minutes. Pregnant cows remain with the herd, and the cow-calf pair can move with the herd within hours of the birth. The bawling of young calves helps to maintain contact between cow and calf. The playful young calves soon begin feeding on vegetation, though they will suckle occasionally throughout their first year.

The arctic wolf is the only wild predator of muskoxen. Hunting in pairs or small packs, wolves kill either solitary muskoxen or individuals separated from herds during an attack.

The arrival of Europeans and guns pushed the muskox to the brink of extinction. Hundreds were shot for food to support the explorers and whalers. Thousands more were killed for their hides by the trappers and hunters of the fur-trading companies.

In 1917, the Canadian government put the muskox under protection, and the populations have recovered slowly. On some of the arctic islands, the numbers of muskoxen have increased steadily. Consequently, since 1970, the Inuit of northern Canada have been permitted to kill an increasing number of muskoxen each year. Recreational hunting has become a means of increasing the income of some northern communities. On some islands, however, the numbers of muskoxen have fallen, and in some areas no calves have been produced for several years in a row.

As human activity increases in arctic Canada, scientists are watching its effect on muskoxen. Biologists are monitoring wild populations of muskoxen through aerial surveys, tagging and radio-tracking programs, and studies of range conditions. The government has declared Polar Bear Pass, on Bathurst Island, a national wildlife area. Muskox defense strategies have always been ineffective against people. Disturbed by low-flying aircraft or by humans on foot, muskoxen first stand their ground in a defensive ring and only when pressed closely do they stampede away from danger.

Muskox domestication projects were established at Unalakleet in Alaska and at Fort Chimo, Québec. Now located at Palmer, the Alaskan domesticated herd has resulted in a native industry based on the manufacture of clothing and other woollen items. The muskoxen from the Fort Chimo project have been released and now range freely in northern Quebec.

Matthiessen, P. 1967. Oomingmak, the expedition to the muskox island on the Bering Sea. Hastings, New York.