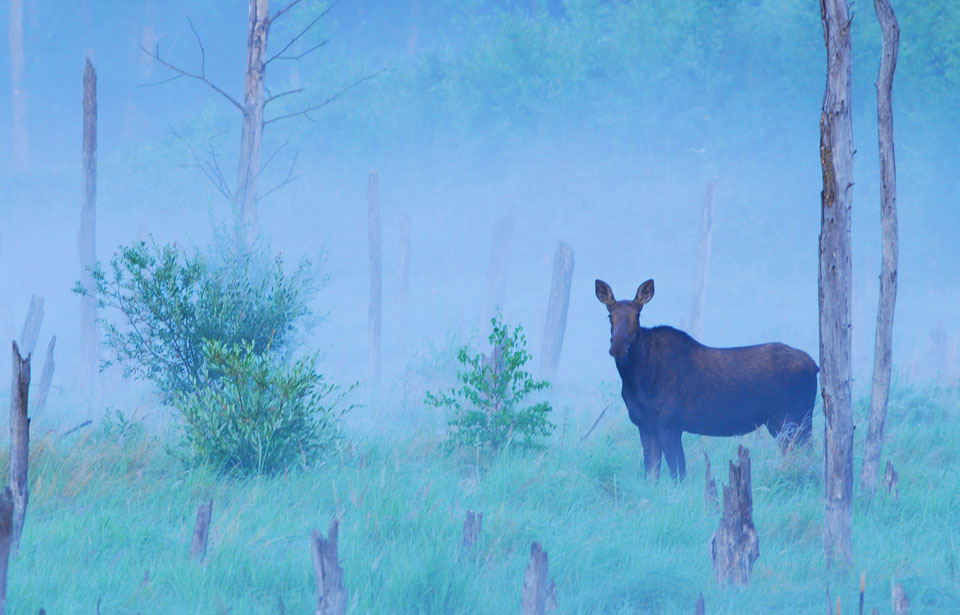 A bull moose in full spread of antlers is the most imposing beast in North America. It stands taller at the shoulder than the largest saddle horse. Big bulls weigh up to 600 kg in most of Canada; the giant Alaska-Yukon subspecies weighs as much as 800 kg. In fact, the moose is the largest member of the deer family, whose North American members also include elk (wapiti), white-tailed deer, mule deer, and caribou.

Moose Alces alces have long, slim legs that end in cloven, or divided, hooves often more than 18 cm long. The body is deep and massively muscled at the shoulders, giving the animal a humped appearance. It is slab-sided and low-rumped, with rather slender hindquarters and a stubby, well-haired tail. The head is heavy and compact, and the nose extends in a long, mournful-looking arch terminating in a long, flexible upper lip. The ears resemble a mule’s but are not quite as long. Most moose have a pendant of fur-covered skin, about 30 cm long, called a bell, hanging from the throat.

In colour the moose varies from dark brown, almost black, to reddish or greyish brown, with grey or white leg "stockings."

In late summer and autumn, a mature bull carries a large rack of antlers that may extend more than 180 cm between the widest tips but that are more likely to span between 120 and 150 cm. The heavy main beams broaden into large palms that are fringed with a series of spikes usually less than 30 cm long. The antlers are pale, sometimes almost white.

A bull calf may develop button antlers during its first year. The antlers begin growing in midsummer and during the period of growth are soft and spongy, with blood vessels running through them. They are covered with a velvety skin. By late August or early September the antlers are fully developed and are hard and bony. The velvet dries and the bulls rub it off against tree trunks.

Mature animals usually shed their antlers in November, but some younger bulls may carry theirs through the winter until April. Yearling bulls usually have spike antlers, and the antlers of two-year-olds are larger, usually flat at the ends. Moose grow antlers each summer and shed them each autumn.

The voice of a newborn calf is a low grunt, but after a few days the calf develops a strident wail that sounds almost human. During the breeding season, or rut, the cow moose entices a mate with a nasal-toned bawling. The bull responds with a coughing bellow.

Moose are found on the rocky, wooded hillsides of the western mountain ranges; along the margins of half a million lakes, muskegs, and streams of the great boreal forest; and even on the northern tundra and in the aspen parkland of the prairies.

Moose tolerate cold very well but suffer from heat. In summer, especially during fly season, moose often cool off in water for several hours each day. In fact, moose are quite at home in the water. They sometimes dive 5.5 m or more for plants growing on a lake or pond bottom. Moose have been known to swim 19 km. Of all North American deer, only the caribou is a more powerful swimmer. A moose calf is able to follow its mother on a long swim even while very young, occasionally resting its muzzle on the cow’s back for support.

The eyesight of the moose is extremely poor, but its senses of smell and hearing compensate.

With their tremendous physical power and vitality, moose can travel over almost any terrain. Long legs carry them easily over deadfall trees or through snow that would stop a deer or wolf. Their cloven hooves and dewclaws spread widely to provide support when they wade through soft muskeg or snow. When frightened they may crash noisily through the underbrush, but in spite of their great size even full-grown, antlered bulls can move almost as silently as a cat through dense forest.

Before bedding down, a moose usually travels upwind for a time and then swings back in a partial circle. Thus predators following its track will have to approach from the windward direction. Skilled hunters know when to leave the track and work their way upwind to the hiding-place of their quarry. Moose are found in Canadian forests from the Alaska boundary to the eastern tip of Newfoundland and Labrador. It is estimated that there are between 500 000 and 1 million moose in Canada. Since the beginning of settlement in Canada there have been considerable shifts in the distribution of moose. They are found in many regions which had no moose in presettlement days. There are now large moose populations in north-central Ontario and in the southern part of British Columbia, where moose were previously unknown. They have only recently spread to the Quebec North Shore, north of the Gulf of St. Lawrence. The island of Newfoundland, which had never been occupied by moose, was "seeded" with a few pairs in the early 1900s and now has large populations. Moose are constantly spreading northwards through the sparse transition forest that extends to the open tundra.

In June and July, moose gather around salt licks, usually low-lying areas of stagnant, mineral-rich water. At that season, when they feed heavily on leaves and other lush plant growth, they seem to require the supplementary minerals that the salt licks provide. Moose drift to the willow-rich valleys or other areas where good forage exists close to forest cover.

During the winter months, moose live almost solely on twigs and shrubs such as balsam fir, poplar, red osier dogwood, birch, willow, and red and striped maples. Winter is a time of hunger for moose. They restrict their food intake and limit their activity to save energy. When food becomes scarce, as it often does toward spring, moose will strip bark from trees, especially poplars.

Before settlement, the large supplies of woody twigs needed by moose were provided by young forest regrowth in the wake of forest fires. Now that wildfire has been largely controlled, the moose’s source of food is often areas that are growing again after clear-cut logging.

Where predation and hunting are limited, moose numbers may increase to the point where food is inadequate. Under these conditions, many animals starve while all are malnourished and more likely to be killed by predators or disease. Concentrations of up to 135 animals per 10 km2 have been seen in Wells Grey Provincial Park in British Columbia.

Deer, elk, rabbits, and even beaver compete with the moose for food.

A good food supply improves breeding success. On good range, more than 90 percent of the cows become pregnant and up to 30 percent bear twins. Very rarely, triplets are observed. However, when the food supply is poor, rates of pregnancy can drop to 50 percent, and the twinning rate almost to zero.

At birth a calf moose is a tiny, ungainly copy of its mother. If it is one of twins it may weigh 6 kg; if born singly, between 11 and 16 kg.

Calves are helpless at birth. The mother keeps them in seclusion for a couple of days, hidden from their many enemies in a thicket or on an island.

Of all North American big-game animals, the moose calf gains weight fastest. During the first month after birth it may gain more than half a kilogram a day, and later in the summer may begin to put on more than 2 kg a day for a time. At the age of only a few days a calf can outrun a human and swim readily.

Calves stay with the cow until she calves again the following spring. At that time she drives off her yearlings—no doubt a difficult experience for the "teenage" moose.

Throughout most wolf range in Canada, moose are the principal prey of wolves. Wolves kill many calves and take adult moose all year. Hunting healthy adult moose is a difficult and often dangerous business for wolves. The flailing hooves of a cornered moose frequently cause broken bones and even death, and only about one confrontation in 12 ends with the wolves successfully killing a moose. In winter, wolves usually hunt in packs. In deep crusted snow, or on smooth ice, a pack can easily bring down a moose. They usually run up beside their quarry and rip the tender flanks until the moose is weakened from loss of blood. In the end, wolves get almost every moose.

Ticks are common on moose, especially in late winter, and may weaken animals seriously both by sucking blood and by causing the affected moose to rub off much of its hair, causing substantial heat loss. Internal parasites such as the hydatid—a tiny tapeworm—affect moose, especially when lack of forage and a heavy tick infestation lower their resistance.

Another serious parasitic disease of moose is caused by the meningeal worm, so called because it attacks the meninges, or membranes, surrounding the brain and spinal cord. Meningeal worm is a parasite of white-tailed deer, which are adapted to it. However, in moose it is deadly, and there is a long history of moose dying in regions where the two species overlap.

Moose are an important economic resource in Canada. Moose hunting generates over $500 million in economic activity annually and provides large amounts of food for aboriginal and other rural people. Moose are a major element in the complex of wildlife attractions that draw visitors to parks and other wildlands to view and study nature.

Populations must be kept within the limits set by the food supply to prevent starvation, disease, and serious damage to vegetation. Foresters in areas that are overpopulated by moose find that the regeneration of forest trees is harmed significantly. This may seriously reduce future timber crops as well as the breeding habitat of songbirds that nest in deciduous shrubs.

Moose respond well to management of their habitat by logging or controlled burning if these activities maintain a diversity of open areas and patches of larger trees for cover. Today, moose management in Canada is soundly based on aerial counts, habitat inventories, and scientific studies of reproductive rates and calf survival. Moose have adapted well to human activities, and with appropriate management, they will always be part of the Canadian scene.

Alces. A journal devoted to the biology and management of moose. Lakehead University School of Forestry, Thunder Bay, Ontario.

© Her Majesty the Queen in Right of Canada, represented by the Minister of the Environment, 1997. All rights reserved.
Catalogue number: CW69-4/73-1997IN
Text: E.S. Telfer
Photo: Parks Canada