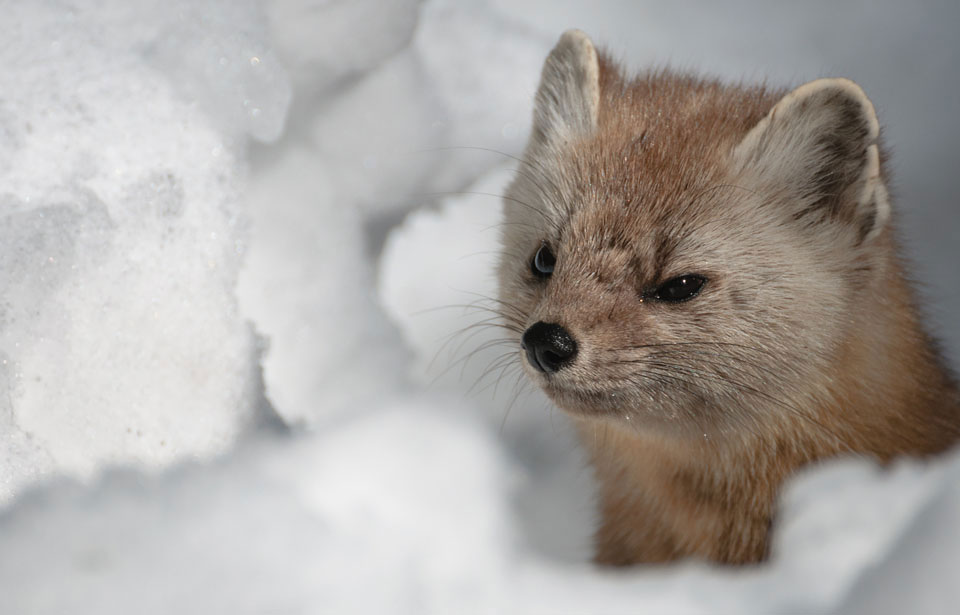 The marten Martes americana, a small predator, is a member of the weasel family, Mustelidae. It is similar in size to a small cat but has shorter legs, a more slender body, a bushy tail, and a pointed face. The fur varies from pale yellowish buff to dark blackish brown. During winter, the marten has a beautiful dark brown fur coat and a bright orange throat patch. The summer coat is lighter in colour and not nearly as thick. Males are the larger sex and weigh about 1 000 g, whereas females weigh about 650 g.

The Mustelidae family also includes several other more familiar animals such as the ermine, skunk, and mink. It is thought that martens entered North America from Asia about 60 000 years ago. There are several species of martens worldwide and perhaps the most famous is the Russian sable, which is well known for its luxurious fur.

In winter, the soles of a marten’s feet are covered with fur and the toes are not distinguishable in the tracks. Tracks are about 3.7 cm long and form two ovals that overlap by about one third. This happens because martens travel with a loping sort of gait, and the hind feet land in the tracks left by the front feet. Loping is common among mustelids, and it takes some practice to be able to distinguish the tracks of the various species.

Martens prefer old growth coniferous or mixed woods forest, although they may seek food in some open areas. However, the amount of undisturbed forest is continually diminishing, and new-growth forests do not support as many marten as the original forest did. In northern Ontario, for example, the density of marten in forests logged 10 to 50 years ago is only 10 to 30 percent of the number in uncut areas. Loss of habitat has contributed in a major way to the decline in abundance of this species in North America. There is some indication that martens may tolerate partial logging of their habitat, but this needs more study and a cooperative multiple use management program for forested lands.

The marten is a solitary animal. Adults will maintain living areas—called home ranges—by keeping out other members of the same sex while tolerating members of the opposite sex. Males and females spend time together only during the mating season. Home ranges vary in size with changes in both the marten population and the abundance of food. When food is abundant a male’s range is about 3.5 km; if food is scarce this size may double. Females require only about half the area needed by males. Home ranges in logged areas are also much larger than those in uncut forest.

Marten hunt at all times of the day in spring and summer and are most active at daybreak and dusk. During these seasons they are active for about 16 hours a day. Females with young in the den are only active during the day for about six to eight hours. As the temperatures drop, marten are increasingly less active at night. During the coldest months they may hunt for only a few hours in the warmest part of the day. If the weather turns stormy and very cold they may even den up for several days.

Curious and excitable, martens hunt by investigating underneath downed trees and stumps, inside hollow trees, and in dense clumps of young conifers. In winter, they are known to hunt beneath the snow in tunnels created by red squirrels or under snow-covered logs. Loggers often see them near their camps, and a stolen lunch bag is not unheard of. The marten exemplifies the curiosity, ferocity, and lightning-fast reflexes of the weasel family.

Most people who have studied martens have noted that they are not fond of water. However, swimming martens have been seen, although they travelled only a short distance.

A century ago martens were common in the extensive forests that covered much of North America. Unfortunately, land clearing and trapping have taken their toll, so that today the species has been eliminated from much of the southern portion of its former range. Martens no longer occur in Prince Edward Island and were eliminated from but later reintroduced into Nova Scotia and several American states. They are classified as an “endangered” species in Newfoundland and Labrador, where they have had protected status since 1934. Elsewhere, they occur in forested areas of central and northern Canada, the northern United States, and southwards in the Rocky Mountains.

The marten is often described as an "arboreal predator," but this is inaccurate. The misconception probably arose from the fact that martens are seen in trees where they have climbed to escape an intruder. Martens are agile climbers but take almost all their prey on the ground. They have an extremely varied diet and are classed as generalized predators; that is, they will eat whatever they can catch. Mostly they feed on red-backed voles, deer mice, field voles, varying hare, grouse, squirrels, and shrews. They are also known to take birds’ eggs and amphibians and make extensive use of berries, especially raspberries and blueberries.

Male and female martens spend time together only during the mating season in late July and early August. The female rears the young alone. Litter size is reported to range from two to six but is most often three, and the young are born in March or April, eight or nine months after mating.

This is an abnormally long gestation, or pregnancy, period for a small mammal and results from a phenomenon known as delayed implantation. After mating and fertilization, development of the embryo stops at a very early stage. Implantation into the uterus wall does not take place until February. Delayed implantation occurs in several other members of the Mustelidae family as well.

The young are born in a den, usually located inside a hollow tree. At birth, they weigh about 30 g, are blind, and are covered with a very fine fur. The female nurses the young well into the summer, spending little time away from the den until the young leave with her in June or July. Raising the young is an extremely energy-demanding task, and the female may lose considerable weight during this period. The kits apparently stay with their mother until late August or September, when they disperse. Females may breed in their first year, but most do not breed until they are two years old. Males are probably not capable of breeding until their second year either.

Marten have few natural enemies, but other mammalian predators, as well as hawks and owls, have been recorded as preying upon an unwary marten. Marten populations are probably limited by the amount of food available. That is, as natural factors such as disease and lack of food reduce the populations of the species they prey on, marten populations also decline. The great enemy of marten is the human being, and overtrapping has occurred in the past.

Pelts of marten are marketed as Canadian or American sable and generally command a high price. It was this high price that led, in part, to drastic declines in the numbers of marten since European colonization of North America. Annual harvests of over 100 000 martens were common in the mid-1800s. Trapping pressure was so heavy that martens were extirpated from many forested areas.

It became necessary to place martens and other furbearers under strict regulation to allow populations to recover. Even so, this was not always sufficient, and restocking programs had to be initiated. Many of these have been successful, and trapping on a limited basis has begun again in some formerly depleted areas. In the 1983–84 season, over 150 000 martens were taken by trappers in Canada, and recent levels are the highest ever recorded. This does not mean that martens are now extremely abundant, but more likely that as forests have become increasingly accessible because of more roads and improved bush vehicles, marten are now regularly trapped in areas that were previously harder to reach.

Efforts have been made to raise martens on fur farms, as has been done successfully for foxes, mink, lynx, and a few other species. Martens are difficult to raise and so far little success has been achieved.

Management of this species is especially difficult because there is no easy and inexpensive way to census a marten population. Experience has shown that if sufficient breeding stock exists in areas where there is no trapping, dispersal of martens into surrounding areas where trapping does occur may help trapped populations rebuild, if trapping pressure is reduced. However, if there is easy access to a tract of land, such as that provided by forest access roads, then overtrapping can occur and a population can be rebuilt only if trapping is curtailed entirely for several years.

A registered trapline system, such as in Ontario, provides a biologist with some opportunity to control trapping pressure. Because logging has been a factor in marten declines in the past, it is urgent that land managers recognize the need for multiple use of forested areas. The biologist, forester, and land planner must work in closer cooperation to manage all resources simultaneously.