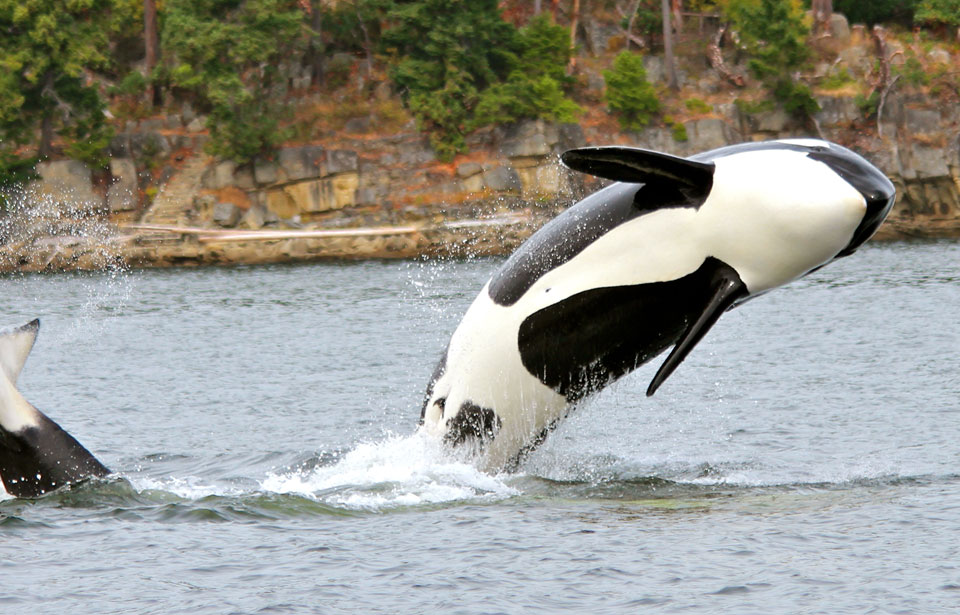 Without a doubt, the killer whale (Orcinus orca) is one of the most distinctive marine mammals in the world. Its size — six to eight metres long and between four and five tonnes in weight — and its striking black-and-white colouring, and long, rounded body make it unmistakable. The first sight of a killer whale is often the tall dorsal fin. In fully grown males, this fin sticks straight up, often as high as 1.8 metres. In females and young whales, the fin is curved and less than one metre high. Behind the dorsal fin is a grey area called a saddle patch. The shape of the dorsal fin and saddle patch, as well as natural nicks and scars on them, are unique to each killer whale.

The largest members of the dolphin family, killer whales are highly social animals that live in stable, family-related groups called pods. The internal social structure of a pod remains unclear to scientists, though we do know that they usually consist of 10 to 40 whales.  Pods occasionally mix to form groups of well over 100 individuals, though this amalgam is only temporary.  Killer whales of both sexes often remain with their parents for life.

Killer whales communicate with each other through a complex variety of whistles, squeaks and whines produced in special air-filled nasal sacs well below the blowhole. The sounds vary from pod to pod, with each group having its own unique dialect. Killer whales can recognize their own pods easily from several miles away based on distinctive songs. Researchers have shown that the more similar the dialects between two pods, the closer they are related. Pods of whales with similar dialects are called clans.

Killer whale pods are very vocal when hunting for prey. They use a series of clicking sounds that bounce off fish and other objects in the water. Called echo-location, this natural sonar is useful when searching for food or navigating in murky water, enabling the whales to build an accurate picture of what’s around them.

The killer whale is a cosmopolitan creature, having been observed in oceans all over the world. They tend to concentrate in colder regions and are found in all of Canada’s oceans, as well as occasionally in Hudson Bay and in the Gulf of the St. Lawrence. In British Columbia, they have been seen throughout almost all marine areas including many inlets and narrow channels.

Killer whales are not limited by such habitat considerations as depth, water temperature or salinity. They have been seen in water ranging from shallow (several metres deep) to open ocean depths. Resident killer whales live in separate northern and southern communities. The northern community lives off northern Vancouver Island and the mainland coast. Southern residents are found off southern Vancouver Island. The offshore population is small and is poorly studied. Some individuals have been sighted as far south as central California and as far north as Alaska. Throughout their world-wide range, killer whales eat a wide variety of prey, including squid, fish, sea turtles, sea birds, sea and river otters, sea lions, penguins, dolphins and other large cetaceans, such as the blue whale. Northern and Southern resident killer whales, however, eat mainly fish. The preferred prey of the offshore population of killer whales is not known, but is likely fishes. Transient killer whales eat mainly other marine mammals. However, because they tend to spend time in water less than five metres deep, often foraging in inter-tidal areas at high tide, transient whales have been known occasionally to eat animals such as deer, moose and pigs.

Recently, researchers on Canada’s west coast have been probing the close relationship between chinook salmon populations and the rate of resident killer whale mortality.  In years when the salmon supply is good, whale populations produce more births than deaths.  The opposite is true of years when the salmon supply falters.  Similar patterns are beginning to appear in transient (mammal-eating) killer whales over a longer period of time.  This research reveals the devastating consequences of an imbalanced food web in the wild, and the crucial interdependency of Canada’s diverse marine species.

Females don’t give birth to their first calf until they are about 15 years old and they calve only once every five years on average. While whales have no natural predators, calves are vulnerable during infancy. It is difficult to measure how many perish either neonatally or within the first few months of life; a very rough estimate suggests that nearly half do not make it to adulthood. Those who do survive their first six months generally live between 30 years (for males) and 50 years (for females). These factors combined mean that killer whale populations tend to have extremely low growth rates, which cam make any factor that increases the death rate by even a small amount a severe threat to the population.

Persistent organic pollutants (POPs) are toxic chemicals which have leeched into ecological habitats around the world, affecting species in all strata of the food web.  To put it in perspective, transient killer whales off the coast of British Columbia are the most POP-contaminated marine mammal population examined to date anywhere in the world, and resident whales aren’t far behind.  Researchers don’t yet know the definitive consequences of such exposure on killer whales, but studies elsewhere show that seals exposed to similar levels of toxic waste have a higher risk of disease and reproductive impairment.

The availability and vitality of food is also a concern for killer whales.  Water pollution compromises the species on which the whales feed, while sport and commercial fisheries have depleted the salmon stock crucial to the killer whales’ diet. As well, the closeness of the whales’ habitat to urban centers has led to more frequent collisions with boats and exposure to significantly higher numbers of oil spills. It’s also possible that the large and growing recreational whale-watching industry may be having a negative impact.  Because whales rely on a precise repertoire of sounds to communicate with each other and locate their prey, noise pollution from whale-watching vessels may have a significant health consequence.

What’s being done
Legislation to protect killer whale populations in British Columbia waters was first introduced in 1970 under British Columbia’s Wildlife Act. In 1982, the whales were included in regulations under the Fisheries Act of Canada. These regulations prohibit hunting without a license, except for Aboriginal hunting. No licenses are currently being issued. Whale-watching guidelines have also been introduced to minimize negative interactions between boats and whales.

Fisheries and Oceans Canada is developing a recovery strategy for southern resident killer whales in the waters of the northeast pacific. Recovery planning is a two-part process. Part one is to develop a strategy that identifies recovery goals and broad approaches that address the immediate threats to the whales’ survival. Part two is to develop an action plan that outlines effective programs and strategies that will protect and recover the southern resident killer whale population.

Development of a recovery strategy under SARA for transient killer whales is currently being considered. The strategy’s long-term objectives will include a better understanding of:

What can you do?
Killer whales will get the protection they need only if all Canadians work together to reduce threats. Find out more about killer whales and be aware of man-made threats to killer whales such as entanglement in fishing gear, noise and water pollution, and collision with boats. Do your best to reduce these threats wherever possible to better protect the whales’ crucial habitat.

Or, join a stewardship program such as the B.C. Cetacean Sightings Network. The Network’s main goals are to identify key habitats and help reduce threats to whales.   The Network also maintains a large database of cetacean sighting reports contributed by mariners along British Columbia’s coast. Find out more »

Text:
Department of Fisheries and Oceans Canada with background information provided by Environment Canada in  March 2004.