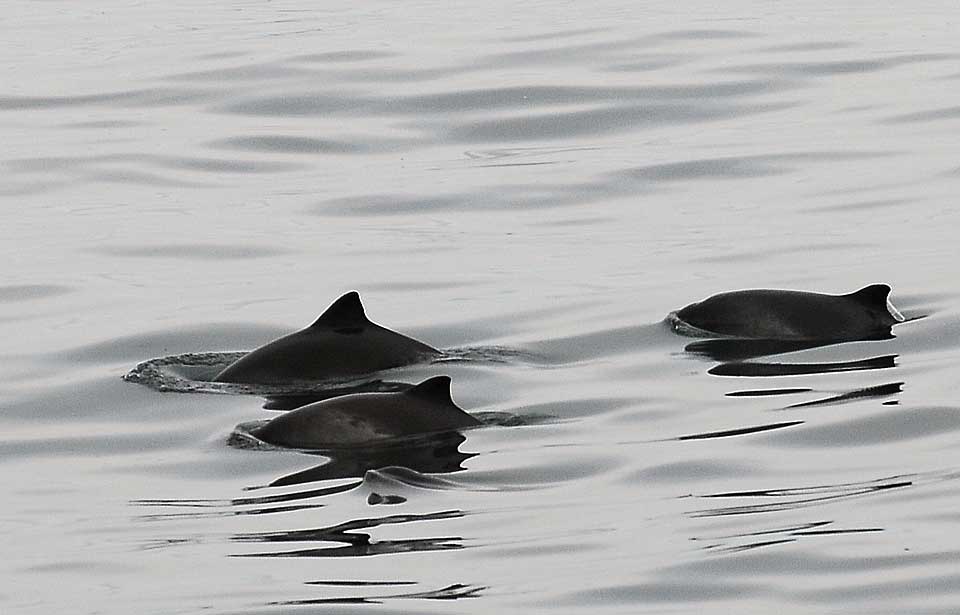 Porpoises have rounded heads and a small triangular dorsal fin at the middle of their backs. Its mottled greyish-white sides fade to almost white along its belly, helping it blend well into the marine environment. A black ‘cape’ extends over the back and sides of the harbour porpoise. Some may also have dark patches on the face.

There is no difference in coloring between males and females; however calves are usually darker than adults.

The harbour porpoise is a short-lived, shy species; there are no estimates of the annual survival rates of the harbour porpoise but it’s understood that their lifespan is relatively short as few live to the age of twenty. During its lifetime, it swims mostly in small, fluid social groups of a few porpoises, travelling together between feeding areas. They are well adapted to cold water, witnessed by the fact that they are rarely found in water warmer than 16 degrees Celsius.

They tend to stay in areas close to small schooling fish prey, but they have been known to move quickly between areas of suitable habitat, separated by tens, or even thousands of kilometres. Harbour porpoises are rarely seen in highly developed areas, leading us to believe that they avoid human activity.

The harbour porpoise wisely remains close to its prey. As a small marine mammal, with limited energy reserves, it needs to feed frequently. This need for frequent meals attracts them to prey-rich areas. The harbour porpoise is typically found in small groups, but have also been observed in large groups when food is concentrated and plenty.

In the Pacific population, squid seems to be important to a diet that includes a variety of small fishes, including cod, herring, hake, capelin and sandlance.

Females become sexually mature between three to four years of age, while males mature slightly earlier. Their mating season is restricted to a few weeks in the early summer with a gestation period of 10 to 11 months. Porpoise calves depend on their mothers for nursing for at least eight months.

An important recent threat to the harbour porpoise is bycatch, particularly in bottom-set gillnets, which are used to capture groundfish. Harbour porpoises are also considered extremely sensitive to noise and might be driven from their habitats because of the use of acoustic harassment devices. These devices are used primarily to protect aquaculture sites. Harbour porpoises may also be affected by environmental contamination in their food chain by organochlorines, dioxins and heavy metals.

The harbour porpoise it is sought after by great white sharks, killer whales and their competitive interactions with some dolphins may restrict their range or even lead to mortality.

It is listed as a species of "special concern" and is protected under the Species at Risk Act (SARA). A management plan for the harbour porpoise, which sets goals and objectives for maintaining its population levels is under development and has a projected completion deadline of July, 2008.

The harbour porpoise is also protected under the Marine Mammal Regulations of the Fisheries Act. This act outlines guidelines for viewing these marine mammals to protect them from disturbance. Furthermore, the harbour porpoise is listed on the World Conservation Union Red List of Threatened Animals.