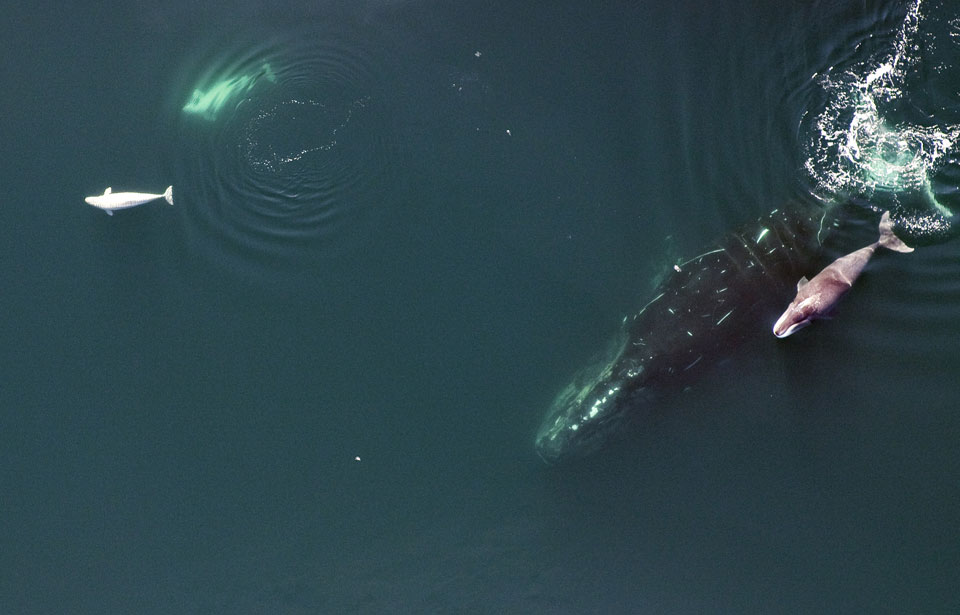 The Bowhead whale was named for its distinctive bow-shaped skull, which is enormous—close to 40 percent of total body length can grow up to 20 metres in length. The whale is mainly blue-black in colour, with cream-colour blotches on its lower jaw, white blotches on its belly, and a pale grey area on its tail. Flippers are small and rounded, and the bowhead has no dorsal fin. Females are generally larger than males. Bowhead whales are among the most vocal of all the baleen whales. Groups of up to 15 whales, scattered over an area of 10 to 20 square miles probably maintain contact with one another during migration. The whales may also use the reverberations of their calls to help them judge an ice floe’s dimensions.

Bowhead whales are well adapted to arctic conditions. They’re very strong, able to break through thick arctic ice and create breathing holes. The blubber of bowheads can measure up to 45 centimetres in thickness, helping them withstand the extreme arctic cold.

Little is known about how quickly bowheads grow or to what age they live. Recent tests carried out on bowheads from the western Arctic, however, have suggested that some of these whales might live to between 100 and 200 years of age.

Bowhead whales are found in arctic and sub-arctic waters from Wrangell Island, Siberia, to Spitzbergen. In Canada, bowhead whales are found in both the western and eastern Arctic. The Eastern Arctic population ranges from northern Baffin Bay to northwestern Hudson Bay; and from Prince Regent Inlet to West Greenland, at different times of the year. The western population is found during the summer months in the Beaufort Sea and Arctic Ocean. Between fall and spring, Bowheads migrate in and out of Canadian waters along the northern coastline of Alaska.

One of the few whales to live so far north, bowheads migrate north and south as the ice retreats and expands. The whales prefer bays, straits and estuaries, and are seldom found far from ice floes.

Bowheads feed almost entirely on small invertebrate animals—including copepods and euphausiids—that occur in dense swarms. As with other baleen whales, such as the humpback, the bowhead has no teeth; instead it has a series of fringed plates—called baleen plates—hanging from each side of its upper jaw. The bowhead has the longest baleen of any living whale—up to four metres. During feeding, a bowhead swims slowly along with its mouth open. When the whale closes its mouth, the water is forced out and the baleen plates act as filters, trapping food on the inside ready to be swallowed.

The eastern Arctic population of bowhead whales was seriously depleted by excessive commercial whaling. Canada banned large-scale commercial whaling of the bowhead in 1915, and the whale was designated ‘endangered’ by the Committee on the Status of Endangered Wildlife in Canada (COSEWIC) in the early 1980s. The total population of eastern Arctic bowhead whales in 1991 was thought to number less than 1,000. About 350 whales were thought to remain in the Baffin Island area—a huge drop from the 11,000 of the early 1800s. Recent Inuit knowledge and aerial surveys suggest that the population is increasing in size. There is a small, carefully managed survival hunt which does not pose a risk to the population. The current population of the western Arctic population  is estimated to number approximately 11,000.Greater volumes of marine vessel traffic could lead to collisions with boats. Noise pollution has also been found to frighten whales away from potential feeding grounds. Noise pollution has been found to frighten western Arctic whales away from potential feeding grounds.

Designated as ‘at risk’ by COSEWIC prior to October 1999, the western and eastern bowhead whale populations must be reassessed against revised criteria before it can be considered for addition to Schedule 1 of the Species at Risk Act (SARA). However, the whale is protected under a number of other Acts, regulations and agreements. The whale is also protected under the U.S. Endangered Species Act. Internationally, the International Whaling Commission (IWC) regulates hunting of Bowhead whales.

A conservation strategy has been developed for eastern Arctic Bowheads, in close cooperation with the Nunavut Wildlife Management Board (NWMB) and the World Wildlife Fund (WWF). Implementation is underway. The strategy sets out priority activities to ensure the long-term survival of the whale.
Find out more ».

Recovery efforts are focused on eastern Arctic populations, through ongoing monitoring of numbers, identification of calf-rearing habitat, and determination of population structure. With the active involvement of Inuit communities in the north, work is also progressing to protect habitat used by bowhead whales in Isabella Bay, Baffin Island and Nunavut.

What can you do?
Bowhead whales will get the protection they need only if all Canadians work together to reduce threats. Find out more about bowhead whales and be aware of human-induced threats such as net entanglement and collision with marine vessels. Do your best to reduce these threats wherever possible.

Text:
Department of Fisheries and Oceans Canada with background information provided by Environment Canada in March. 2004.