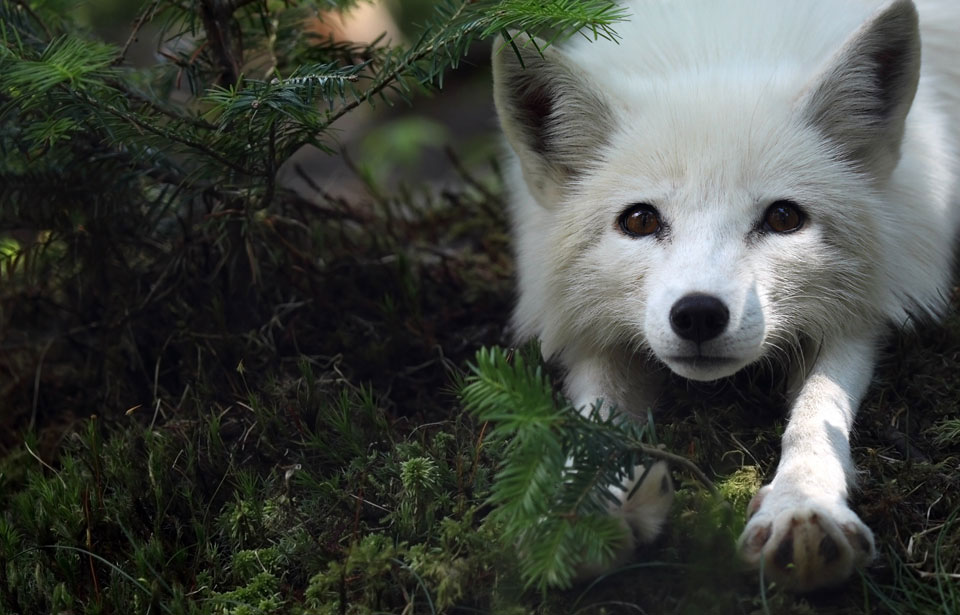 The arctic fox Alopex lagopus, or white fox as it is often called, is a member of the canid family and is related to other foxes, wolves, and dogs.It weighs from 2.5 to 9 kg and measures between 75 and 115 cm in length, making it the smallest wild canid in Canada—about the size of a large domestic cat. The long, bushy tail makes up between 30 and 35 percent of its total length.

Over the winter, the arctic fox has a heavy white coat, but during May, when the snow begins to melt, this coat is shed for a thinner, two-tone brown one. Within a few weeks the back, tail, and legs are dark brown and the remaining underparts are a buff colour. A small proportion of arctic foxes have a heavy, pale bluish-grey coat in winter, which becomes thinner and darker bluish-grey in summer. The blue coloration (blue fox) occurs in almost all populations, although the proportion tends to be higher in those animals living in marine areas that remain mostly ice-free during winter. In Canada, blue foxes seldom make up more than 5 percent of animals that are trapped, whereas in Greenland, for example, the proportion of blue foxes may reach 50 percent.

The voice of the arctic fox is a sound rarely heard except during the breeding season. Courting foxes communicate with a barking yowl that may be heard over a great distance. Adults also yelp to warn their whelps, or pups, of danger and give a high-pitched undulating whine when disputing territorial claims with neighbouring foxes.

The wide distribution of this fox in the severe arctic environment is due to its excellent adaptation to cold and to a wide variety of foods.

The number of arctic foxes, especially in populations dependent upon lemmings for the major portion of their diet, fluctuates widely in relation to the abundance of lemmings. Although the fluctuations in lemming numbers, which occur every three to four years in North America, are not as well understood as those in Scandinavian countries, they are no less dramatic. Population size may vary ten or twentyfold between years, and hundredfold increases are not uncommon at a peak in the lemming cycle. During years when lemmings are plentiful, many foxes survive the long winter, a large proportion of the population breeds the following spring, and the litters are raised successfully. Hence a peak in the arctic fox cycle is recorded the following winter.

A characteristic of the lemming cycle is the "crash," the sudden decrease in population that may be caused by poor weather, lack of food, stress, predation, or a combination of these factors. Faced with a rapidly dwindling food supply, the arctic fox may be forced to abandon customary hunting areas and to travel, often hundreds of kilometres, in a nomadic search for food. Often many foxes travel in the same direction, and their movements are termed "migrations." In Canada little is known about the direction of the migrations or the number of animals that may be involved; however, the intensity and scope of fox migrations in Russia is well known. During a lemming crash, fatigue, intense cold, and especially lack of food take their toll on the population, and many young foxes succumb.

Native traplines, hunters, and diseases, such as rabies and mange, a skin disease caused by a parasite, also contribute to the population reduction. The following spring the remaining foxes are weak, a smaller proportion of the population breeds, and fewer breeding pairs raise all their whelps successfully. When the lemming population is low, the adult foxes often cannot meet the food demands of the growing litter. As a consequence, the adults may abandon the litter, leaving the whelps to starve to death, or the whelps may fight among themselves and kill each other, thereby reducing the food demands of the litter to a level that can be supplied by the adults.

The arctic fox lives in all the lands of the circumpolar Arctic. In Canada, it is found from the northern tip of Ellesmere Island to the southern tip of James Bay.

The diet of the arctic fox varies greatly from one part of its range to another. In the vast expanses of the continental tundra region, the arctic fox is almost entirely dependent on lemmings throughout the year. Only 5 to 10 percent of the summer diet consists of birds, eggs, ground squirrels, and berries. In winter, the fox continues its search for lemmings, which are active under the snow. Other winter food items include the meat caches, or hidden stores, of Inuit trappers, wolf kills, and food cached by the fox during summer.

To satisfy the food requirements of their whelps, or pups, adult arctic foxes living on the tundra hunt lemmings throughout the sunlit arctic summer night, from about 4:00 in the afternoon until 10:00 or 11:00 the following morning. Each adult usually conducts 10 to 15 hunts per night and brings back from three to eight lemmings per hunt. When lemmings are abundant the foxes hunt over an area of 2.5 to 5.0 km2. However, when food is scarcer, the adults probably range much further. Foxes capture the lemmings by digging them from their nests, which are located in soft peaty hummocks. In open tundra covered with low-lying or sparse vegetation, foxes capture active lemmings with a quick dash and a pounce. Lemmings detected in areas of low bush are pounced on as the fox slowly stalks through the bush.

In other areas, other rodents, such as ground squirrels and voles, are an important source of food, and during summer, adult birds, eggs, and flightless young also make up a large part of the diet. Arctic foxes that inhabit coastal regions also hunt for small marine animals, fish, and carrion, or flesh of dead animals, along shorelines. During winter, these foxes venture onto the sea ice, where they frequently trail polar bears for the remains of seal kills and seek out seal dens to capture the pups.

Foxes living close to major seabird colonies raid nests for eggs and capture hundreds of birds, which they cache for food in winter. Some also search along lakeshores during June, hoping to flush a duck, goose, or shorebird from its nest and eat its eggs. Arctic foxes sometimes attack Sandhill Cranes and geese, but are seldom successful against such large prey.

In March or April, two months before the end of winter, arctic foxes begin to form mating pairs. Mating follows a long and playful period of courtship involving much active chasing and play-fighting. Throughout the females’ 51- to 57-day pregnancy, the pair remains together and finds a den for raising the whelps, or pups. Den sites are typically located on the tops or sides of eskers, which are ridges of coarse gravel, or on the tops of banks of lakes or rivers where the soil is sandy, dry, and stable. The den sites are usually free from snow earlier than the surrounding landscape because of the good drainage. Dens may be up to 300 years old and possess as many as 100 entrances. Before the birth of the whelps, both adults share the responsibility for cleaning out a portion of the den and digging one or more new entrances.

Litters of arctic foxes are born between late May and early June. The average litter size is about 11 whelps. It is the largest litter recorded for any wild mammal in the world. Litters of up to 22 whelps have been recorded in Russia. At birth the whelps are blind, helpless, covered with hair, and weigh about 57 g.

Compared to other canids, the male fox is probably one of the most attentive and best providers of food during the denning period. Just before the birth of the whelps and while the female is spending her time nursing and caring for the litter, the male hunts for food for her. After five to six weeks, when the whelps are weaned, the female begins to share the hunting duties with her mate and gradually provides well over half of the food to the growing litter. Although the amount of food provided by the male gradually decreases, he continues to bring food to the den site until the whelps begin to leave the den about 14 to 15 weeks after birth.

The large litter size and rapid growth of the whelps keep the adults busy hunting for food. An average litter of 11 whelps just starting to eat solid food requires about 30 lemmings or the equivalent in other food per day. The demand increases to over 100 lemmings per day just before the whelps leave the den. The adults and young consume about 3 500 to 4 000 lemmings during the denning period.

Adult arctic foxes and their young have few enemies other than people. Wolves will eat a fox if they can catch one or find one caught in a trap. Where their ranges overlap, arctic foxes and red foxes Vulpes vulpes compete for den sites and hunting habitat along the sparsely treed southern fringes of the tundra. Golden Eagles may be a threat to young whelps at the den site, and barren ground grizzly bears and wolves are capable of digging whelps or adults from the den.

In Canada, the beautiful and valuable pelt of the arctic fox is an important source of income for northern native people. During the fur boom of the 1920s, the market value of arctic fox pelts was high, and arctic fox ranches were established. As new industries and ways of life have changed the Arctic, fox pelts have become less important to its economy. Few, if any, arctic fox ranches remain in Canada today. (Ranching is more common in Russia and Scandinavia, where the whelps are live-trapped at den sites and caged until their coat is prime.) Nonetheless the pelts still provide income to northern residents. On Banks Island, in the Northwest Territories, trapping for arctic foxes is actively pursued, and the harvest provides a prosperous living to trappers from the community of Sachs Harbour, on the southwest shore of Banks Island.

The only management controls on the arctic fox are the dates set for the trapping season. There are no restrictions on the number of foxes that may be trapped or the location of trapping areas. Surveys of important denning regions could be carried out to accurately estimate the trapping harvest and determine the abundance of arctic foxes. With decreasing trapping pressure, however, the abundance of lemmings serves as an indicator of arctic fox populations.

Many tourists visit the North to see wildlife, and the arctic fox is one species that they have an excellent chance of observing. These attractive wild canines often visit campsites in search of food and activity. In the past, this has been both a welcome diversion and an inconvenience; for example, scientists who visited colonies where seabirds breed had to take precautions not only against the loss of food from their campsite, but also against leading the foxes, which eat both eggs and chicks, to the nests that they were studying.

Today, as human activity in the Arctic increases, fox populations sometimes boom near garbage dumps and other artificial food sources. The risk of transmission of diseases, such as rabies, rises with the local population of foxes. Managers of fox populations seek to protect foxes against situations in which they become pests, by advising control of artificial food sources. They also point out the importance of protecting sufficient denning sites if the population is not to decline, and if wild foxes are to continue to range across the northern tundra.