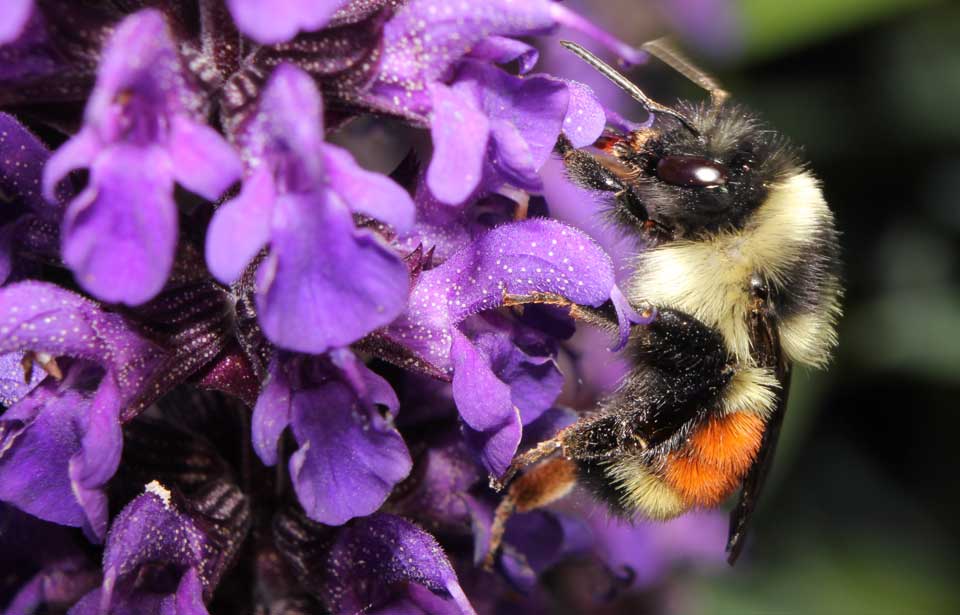 Bees are winged, often hairy, pollen-gathering insects of the Hymenoptera order. Many consider bumble bees to be the most important group of pollinators. Pollinators are animals that transfer pollen between plants, allowing fertilization, which is essential to fruit and seed production. Almost 80% of all flowering plants depend on pollinators to help them transfer their pollen.

There are more than 25,000 bee species in the world. Of the roughly 800 bee species in Canada, next to the honey bee, the bumble bee is the best known. Bumble bees are large (13–25 mm in length), hairy bees that are usually black and yellow with clear wings with black veins. The hind legs of female bumble bees have a wide, cupped area for collecting pollen. The sex of each bee can be distinguished by counting the number of segments on its back (six in females, seven in males), or the number of segments of the antennae (12 in females, 13 in males).

Bumble bees do not have a barbed sting — so they can sting several times if threatened. Yet, not all bumble bees have a stinger. Male bumble bees, called drones, have no stinger at all.

What makes bumble bees, and all native bees, valuable and particularly efficient pollinators is the “assemblage,” or the diversity of bees busily working in a single space to gather nectar from a wide range of plants. This diversity of bees and the plants they pollinate can be tied to bees’ vision. Bees see in ultraviolet light and are thus attracted to different hues. For example, many studies have shown that the bumble bee is strongly attracted to violet and blue flowers. Flower patterns are also thought to be a factor in attracting bees.

Some bees are social creatures and others are solitary. Most of Canada’s native bees are solitary, which means they work to build a nest, gather food and care for offspring independently of other bees. Because solitary bees are not defending a hive, they tend to be less aggressive. Social bees live in hives and have a social structure. About 45 species of bumble bees are social bees native to Canada. Their hives are relatively small compared with honey bee hives — on average between 150 and 200 bees — and bumble bees are not known to swarm. However, they will defend the colony if threatened. Bumble bee hives are usually found underground in abandoned rodent burrows and are lined with the bees’ secreted wax.

Bumble bees are active in all kinds of weather and are often the first bee out in early spring and last in the fall. They can visit 10 to 18 flowers in a minute. They are not big honey producers, but create just enough honey to allow the colony to survive through times of food shortage. Their colonies are seasonal and die out when winter comes, with only the queens surviving to spring.

Bumble bees, like most bees, are able to fly by creating a vortex of air with the down stroke of their wings. Bumble bees fly at a rate of three metres per second. Some scientists liken the bee’s flying to a swimmer moving through water because the bee’s weight is so light compared to the air.

Bumble bees are found across Canada and the world. Their north-south range stretches from the warmer limits of one pole to the other. Although they are found in sub-tropical regions of the world, they prefer more temperate climates. When it comes to feeding, most bees are generalists but a few are specialists. A specialist bee depends on a single plant or a small number of plants for pollen and nectar. A few, like the squash bee, are dedicated to only one type of plant. For the squash bee this includes almost all of the Cucurbits, or gourd-type plants such as squash, pumpkin and cucumber. Specialist bees are most likely to suffer when native plants and habitat is disturbed or destroyed. Bumble bees are generalists. They gather nectar and pollen from a wide variety of flowers, making it easier to survive changes in their environment.

Although bumble bees are thought to prefer flowers with a blue or violet hue, like the New England or sky-blue aster, they still visit flowers of other colours, such as yellow sunflowers.

All bees, including bumble bees, pass through four stages during their one-year life span. The first three stages — egg, larva and pupa — take up the majority of the bee’s life. The adult stage may last only a few weeks, with the exception of the females destined to be queens. A mated queen survives the winter in preparation for spring, when she lays and feeds her larvae.

Spring
The queen bumble bee locates a suitable place to build her hive — usually underground in an abandoned mouse burrow. The queen lays about six eggs at a time. When the eggs hatch, she seals the larvae in cells with bits of food from a ball of combined pollen and wax that she creates. When the larvae eventually pupate, the queen spins a cocoon for the pupa. After a few days the pupa emerge as fully grown worker bees, ready to work to support the colony and their queen. The queen continues to lay eggs, delegating the work of collecting nectar to the worker bees. Near the end of spring and into summer, the queen spends much more time in the hive than she does collecting nectar.

Summer
By summer, the queen and worker bees have built the hive to a desired capacity. The queen then lays eggs that are intended to become next year’s queens and drone bees. Once hatched, the drones leave the nest and live solitary lives with their only purpose being to mate with the young queens. Unlike honey bees, the young bumble bee queens continue to live and work in the colony for the rest of the summer and fall.

Fall
Once the first frosts begin, the newly mated bumble bee queen locates a safe location for hibernation. Only the queen survives the winter. Like many species, the main threat to the native bees of Canada, including the bumble bee, is habitat loss. As native vegetation is replaced by exotic garden plants, large expanses of lawn and roadways, bees lose the resources they need to survive — and to pollinate. Dwindling bee populations could have severe consequences for food crops, garden plants and wilderness areas. Farmers in Eastern Canada, for example, rely heavily on approximately 70 species of native insects, including many species of bumble bees, to fertilize their crops. The estimated total value of honey bees to Canadian agriculture is about $782 million.

Another major threat to native bees is the use of pesticides and insecticides. Research has shown that insecticides and pesticides sprayed on crops and home plants are responsible for reducing bee populations and, consequently, crop yields.

North American honey bees are facing what has been termed “colony collapse disorder,” an absence of adult bees in a hive where the queen, larvae and honey are still present. This phenomenon is possibly being caused by a parasite called Nosema apis, a single-celled protozoan that affects the bees’ digestive systems. Experts from the Ontario Beekeepers’ Association collected 446 bee samples from 25 keepers, and every one contained Nosema apis. More than half of the samples had a more aggressive strain called Nosema ceranae. A further study comparing healthy and unhealthy honey bee colonies showed that a virus called the Israeli Acute Paralysis Virus (IAPV), first identified in 2002, may be contributing to the bees’ demise. However, it has been suggested that bee problems in Canada have less to do with this parasite or virus and more to do with pesticide use and environmental stressors, such as habitat loss.

Relocating hives or introducing bumble bee species to regions where they are not native to further plant pollination could cause further complications for bees in North America. Local native bee species could be threatened by new diseases, such as colony collapse disorder.

What you can do

There are many things you can do both in your own backyard and in your community to help bees and pollinators:

You can volunteer for monitoring programs such as the “Pollinator Observer” program run by Pollination Canada. Participants go into their backyards or local parks and observe these fascinating species at work. Participants keep a journal of what they see, which enables scientists to better understand the crucial relationships between pollinators, ecosystems, plant diversity and human activity.

To encourage bumble bees and other pollinators to visit your backyard, you can plant a variety of local native plants that vary in colour, shape and blooming season. Be sure to provide a clean source of water, mud and other nesting sites, and avoid pesticides or insecticides.

The Canadian Journal of Arthropod Identification