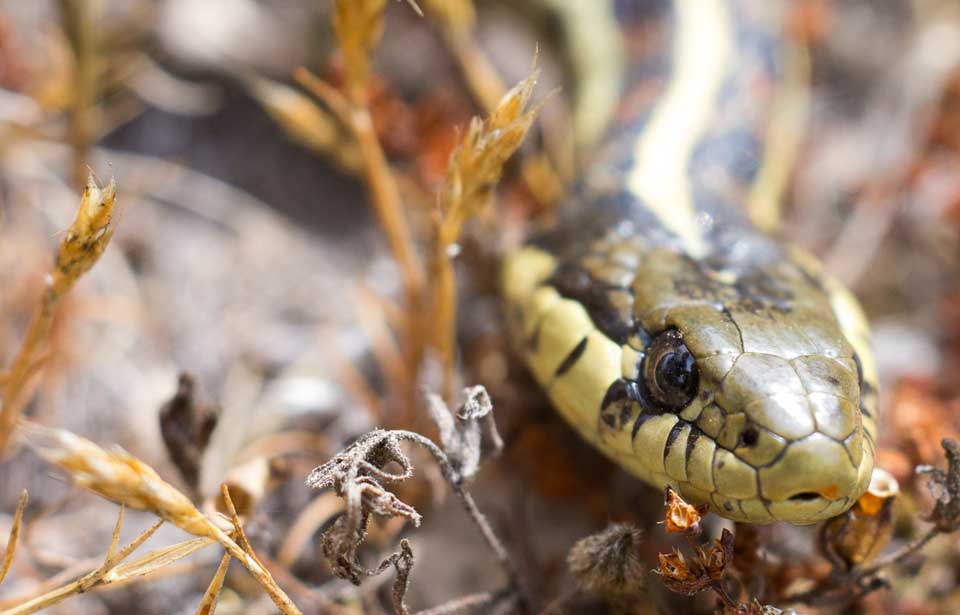 The western garter snake (Thamnophis elegans) is a medium-sized snake with a fairly robust body and long tail. From nose to tip of tail adults can measure between 460-960 mm and females are larger than males.

The head of the western garter snake is large and distinct from its neck. Its crown is black or brownish, depending on which part of western Canada the snake is located. The snake’s upper lip, chin and throat are white or yellow and its eyes are moderately large with a round pupil.

Colours vary with individual snakes, but the prominent yellow to orange stripe running down the western garter snake’s back is easiest to see. There are two lateral stripes on either side of its body — on the 2nd and 3rd rows of body scales — that are similar in color to the stripe down its back. In the space between stripes, the western garter is marked with dark spots or light specks. Like its head, its body has a grayish-green or black to dark brown colour.

The western garter snake has a grey or beige underbelly colour that may have dark spots, or a dark underbelly with white flecks concentrated down the mid-line.

The western garter snake tends to inhabit open forest and grassy areas, preferring meadows and estuaries. Found in habitats ranging from desert riparian areas to mountain lakes and meadows, it is rarely found far from water where it both hunts and hides if disturbed. It can be found from sea level to 3,200 metres in elevation.

If looking for a western garter snake, the best time of day to spot one in early or late summer is mid-day when it is basking in the sun, whereas during the heat of mid-summer your best bet is to look in the early morning. It is a diurnal snake, active only in the warm hours of the day. This species hibernates communally in colder areas, sometimes with the common garter snake. The length of its inactive period varies with the local climate.

The western garter is a very active snake that sometimes bites if captured. It will also emit foul-smelling liquid from its cloacal glands near its base when captured. Unusual for Thamnophis, the western garter snake has been known to grapple with adult rodents like constrictors, coiling its body around the prey. This is probably not constriction but a method of restraining potentially dangerous prey. Also, this species of garter snake’s saliva is reportedly mildly poisonous to its prey.

The second most widely distributed garter snake in Canada, the western garter snake can be found from southern British Columbia and Alberta east to southwestern Saskatchewan all the way south to central New Mexico and west into central California.

Although the young may be found near their mother after birth, no parental care is given and they soon fend for themselves.

The main threat to western garter snakes is habitat loss, both to their summer and winter habitats. Pesticide use is also a concern since it harms snakes and poisons their prey. Snake road kills also have an impact because snakes seek the heated asphalt to warm their cold-blooded bodies.

What you can do
It is important to leave or create habitat suitable for snakes. You can do this in your own backyard by leaving a quarter of your garden wild, which provides damp, shady areas for snakes to cool off in the summer. Also, snakes like a warm sunny environment with lots of places to hide. Provide some rock piles and logs around ponds and gardens to offer these creatures shelter and protection from predators. Put some of the rock piles in sunny areas to provide a place for basking in the sun. Finally, you can try your hand at building a hibernaculum, which provides a safe location for snakes to hibernate.