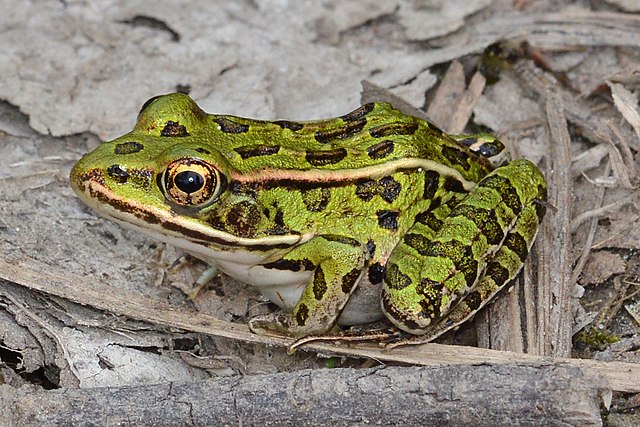 This animal:
-Is a common frog found across most of North America
-Is an amphibian; needs both aquatic and terrestrial habitats to survive
-Has several beautiful morphs, or colour variations
-Is a species of Least Concern, although populations are decreasing in some areas

The Northern Leopard Frog (Lithobates pipiens) is named for its leopard-like spots across its back and sides. Another common name for this frog is the ‘meadow frog’ for its common habitat. Historically, these frogs were harvested for food (frog legs) and are still used today for dissection practice in biology class.

Northern Leopard Frogs are about the size of a plum, ranging from 7 to 12 centimetres. They have a variety of unique colour morphs, or genetic colour variations. They can be different shades of green and brown with rounded black spots across its back and legs and can even appear with no spots at all (known as a burnsi morph). They have white bellies and two light coloured dorsal (back) ridges. Another pale line travels underneath the nostril, eye and tympanum, ending at the shoulder. The tympanum is an external hearing structure just behind and below the eye that looks like a small disk. Black pupils and golden irises make up their eyes. They are often confused with Pickerel Frogs (Lithobates palustris); whose spots are more squared then rounded and have a yellowish underbelly.

Male frogs are typically smaller than the females. Their average life span is two to four years in the wild, but up to nine years in captivity. Tadpoles are dark brown with tan tails.

The spots and coloration of Northern Leopard Frogs help them blend in with their surroundings. A loud splash as you walk around a pond is a good indicator that a frog is taking cover.

Northern Leopard Frogs commonly live close to a source of water – such as a river, wetland, pond or lake. It’s also commonly found in meadows, hence its other popular name, ‘meadow frog’. As an amphibian, Northern Leopard Frogs will spend part of their life as fully aquatic tadpoles and later grow legs to spend more time on land. Hunting can take place during the day or night, but they are primarily nocturnal. Staying still or fleeing to an aquatic refuge are two of its defense mechanisms.

During the winter, Northern Leopard Frogs hibernate deep in ponds or mud. To survive the coldest months, their chosen hibernation site cannot freeze for more then eight hours and must have enough oxygen. Populations of Northern Leopard Frog are spread across North American, extending south to the US-Mexico border and north into the Northwest Territories of Canada.

As adults, Northern Leopard Frogs are carnivores and are not picky about what they eat. They will eat all sorts of bugs as well as frogs, snakes, bats and birds that happen to be smaller than them. Their primary hunting strategy is to remain still and wait for prey to get close before leaping forwards and drag the unlucky victim into its mouth using its long sticky tongue to.

As a tadpole, they eat algae, bacteria, plants, and small pond invertebrates. Northern Leopard Frog breeding season begins in early spring between April and June. Males will call out to potential mates who wait on the shoreline. Females mate once and lay between 1,000 and 5,000 eggs in clusters either attached to vegetation or left floating on the surface of still waters. Fertilization of the eggs happens externally, with the male gripping tight onto the back of the female as she lays eggs into the water.

Tadpoles hatch after nine days on average, but variations in temperature can lengthen or shorten the time to hatch. Once hatched, tadpoles take around three to six months to become frogs in a process called metamorphosis. Most amphibians are born as aquatic larvae with gills and gradually change form until they have lungs that can breathe air. Tadpoles will grow legs and have their tails shrink over time and are often referred to as ‘froglets’ when they are between their juvenile and adult forms.

Northern Leopard Frogs are quite common across most of Canada, but some populations are in decline.

While listed under Least Concern by the IUCN Red List, the population in Alberta has been threatened since 1997. Some populations in Alberta have declined by 80 per cent.  Northern Leopard Frogs face threats like habitat loss, road mortality, hunting from invasive predators like fish, domestic cats, and bullfrogs. Pesticide runoff from agricultural and urban areas also contributes to declines in frog populations.

Most amphibians are considered indicator species due to their highly permeable skin; they are very sensitive to changes in their environment. If frog populations are suffering, there is sure to be a problem with water or air quality.

Climate change also poses a problem for the frogs, as changes in weather patterns could have a big impact on winter survival and confuse the timing of breeding events.

-Limit the handling of frogs as they have very sensitive skin.
-If handling, hands should be washed and free of products (like sunscreen)
-Keep cats indoors– domestic cats are one of the leading causes of extinction among small animals
-Avoid the use of pesticides
-Don’t dump household chemicals into storm drains! These empty directly into the watershed
-Preserve or restore habitat along shorelines
-If you have a pool, you can install a ramp to help animals escape