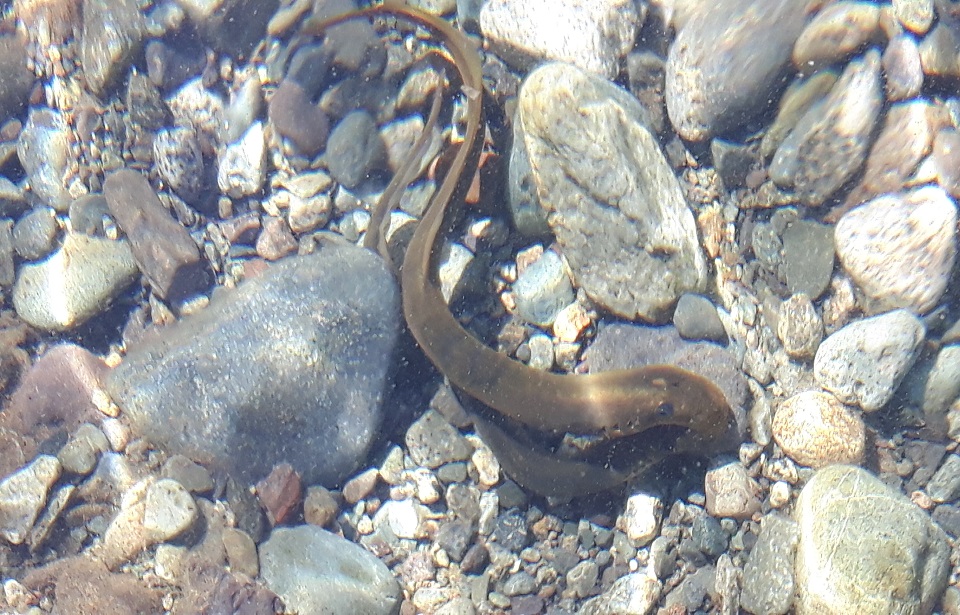 This animal
•    Is one of an ancient group of fishes which evolved about 360 million years ago, millions of years before dinosaurs roamed the earth
•    Is a small, slender, eel-shaped fish with no scales or spine
•    Has an amazing life history where it spends most of its life (years) in larval form then undergoes a transformation and becomes parasitic, feeding off the flesh and blood of other fish
•    Is found only in two connected lakes, Cowichan and Mesachie lakes, on Vancouver Island, British Columbia.  Its limited range is one of the reasons it is a protected species.

Lampreys are an amazing group of ancient fish species which first appeared around 360 million years ago.  This means they evolved millions of years before the dinosaurs roamed the earth. There are about 39 species of lamprey currently described plus some additional landlocked populations and varieties.

The Cowichan Lake lamprey (Entosphenus macrostomus) is a freshwater parasitic lamprey species. It has a worm or eel-like shape with two distinct dorsal fins and a small tail.  It is a slender fish reaching a maximum length of about 273mm.  When they are getting ready to spawn they shrink in length and their dorsal fins overlap.

Unlike many other fish species, when lampreys are getting ready to spawn you can tell the difference between males and females. Females develop fleshy folds on either side of their cloaca and an upturned tail.  The males have a downturned tail and no fleshy folds. Lamprey don’t have gills like other fish species but have pores for breathing. These seven gill pores are located one after another behind the eye.

There are several characteristics which are normally used to identify lamprey.  Many of these are based on morphometrics or measurements, of or between various body parts like width of the eye or, distance between the eye and the snout.  Other identifying characteristics include body colour and the number and type of teeth.

Some distinguishing characteristics of this species are the large mouth, called and oral disc and a large eye.  This species also has unique dentition.  For example, these teeth are called inner laterals.  Each lateral tooth has cusps and together they always occur in a 2-3-3-2 cusp pattern. Critical habitat for this species has been identified as Mesachie and Cowichan lakes including tributaries flowing into them up to 100m from the confluence with the lake.

To have an appreciation for the types of habitats that the Cowichan Lamprey use we need to understand the different stages of their life cycle. This can be difficult because as a protected species we do not want to harm them in order to study and learn more of their biology. What we know about this species is therefore based on the limited knowledge of this species and information from other freshwater parasitic lampreys.

Larval lamprey are called ammocoetes (rhymes with feet). They are blind with undeveloped mouths and look a little like a worm. They are commonly found in silt covered areas around the edge of Cowichan and Mesachie lakes, particularly near the outlet of rivers and creeks. They can be found elsewhere if there is suitable substrate for burrowing.

The Cowichan Lake lamprey is estimated to spend years, possibly as many as 6, as an ammocoete before undergoing metamorphosis into an adult. During metamorphosis their body changes dramatically.  They develop a functional digestive system, teeth, a fully formed mouth and eyes.  In their new form, they are ready to parasitize.

During the adult phase, Cowichan Lake lamprey utilize all areas of the lakes.  They can be found free swimming as well as parasitizing fish.  They may be found in tributaries but as tributaries can often be dry in the summer, this is not common. For this species, we know very little about this phase of their life cycle.  For example, we don’t know how long they spend attached to an individual fish, how often they need to feed or even how long they are parasitic.  It has been suggested they may spend up to two years feeding parasitically before they spawn.

Spawning and early rearing- This species spawns from May to August in the sandbars created by the outflow of rivers and streams into Mesachie and Cowichan lakes.  Spawning fish make nests by moving small rocks and pebbles with their mouths.  Eggs develop quickly into ammocoetes, taking several weeks depending on water temperature. Having sufficient water on these sandbars as well as sand and pebbles of an appropriate size for nest building are required.

The Cowichan Lake lamprey is found only in the Cowichan Valley on Vancouver Island, British Columbia, nowhere else in the world.  Their range includes two connected lakes, the small Mesachie Lake and large Cowichan Lake (30km long, 4km wide and 160 m deep) connected through a bay of Cowichan Lake called Bear Lake. Although they spend most of their time in the lake, their range also includes rivers and streams connected to the lakes.

Ammocoetes feed on organic material produced by decomposing plants and animals. Their bodies are burrowed in the sediment and they poke their heads out to feed passively on organic matter floating by.

Adults feed parasitically on the flesh, blood and tissues of other fish species. It is likely they will also feed on dead fish. Although there are several potential prey species in Cowichan and Mesachie lakes, this lamprey seems to have a preference for cutthroat trout. Using their oral disc, they attach to the sides of fish and grate and rasp at the skin and scales with their teeth, feeding on blood and tissue.

If the Cowichan Lake lamprey is like other lamprey species, they are terminal spawners, that is they spawn only once before dying.  Spawning however, is an event to see.  It was not until 2017 that spawning was first observed by Cowichan Lake lamprey.  This species is quite unique and that it is a lake spawning lamprey.  This is in contrast to most other lamprey species which spawn in rivers.  Cowichan Lake lamprey move from the deep water of the lake onto the sandbars created by the flow of rivers into the lake. Both males and females use their oral discs and bodies to clear out areas of small rocks and pebbles creating a nest.  Using the suction of their oral discs they can pick up small rocks bigger than their head and move them to the outside of their nesting area.  They have been observed spawning in pairs as well as in groups.  Using his oral disc, the male sucks onto the head of a female and wraps his body around hers.  After much wriggling, the male squeezes unfertilized eggs out of the female using his body and fertilizes the eggs. They both then move pebbles around the nest and may try spawning again, swimming off when they are finished.

Water height in Cowichan Lake is regulated through a weir. Water is released from the weir to supply enough flow for both conservation of aquatic species and human needs downstream of the lake.

Because of reductions in winter precipitation and increased duration of summer droughts, it has been difficult to maintain enough water in Cowichan Lake to ensure coverage of spawning habitat throughout the spawning season (May to August).  If these conditions persist, it is not known what the effects on the population may be. A mutually beneficial solution to summer droughts currently being negotiated is an increase in the height of the weir to hold back more water for use during summer and fall.  This would benefit both lamprey in the lake as well as humans and aquatic species downstream.

Individually, there are things you can do to help lamprey and their habitat.   Conserve water to help ensure that the lake has the maximum amount of water available during droughts.  Water conservation can be as simple as taking shorter showers, not watering lawns, or washing cars. Every drop matters.   Think before you let the tap run to get that cold glass of water.

Another threat is direct harm.  This occurs most commonly when fishing and is easily fixed.  If you are out fishing and catch a cutthroat trout with a lamprey attached, return it safely to the water, don’t harm it.  You should consider yourself lucky to find such a rare and amazing animal.