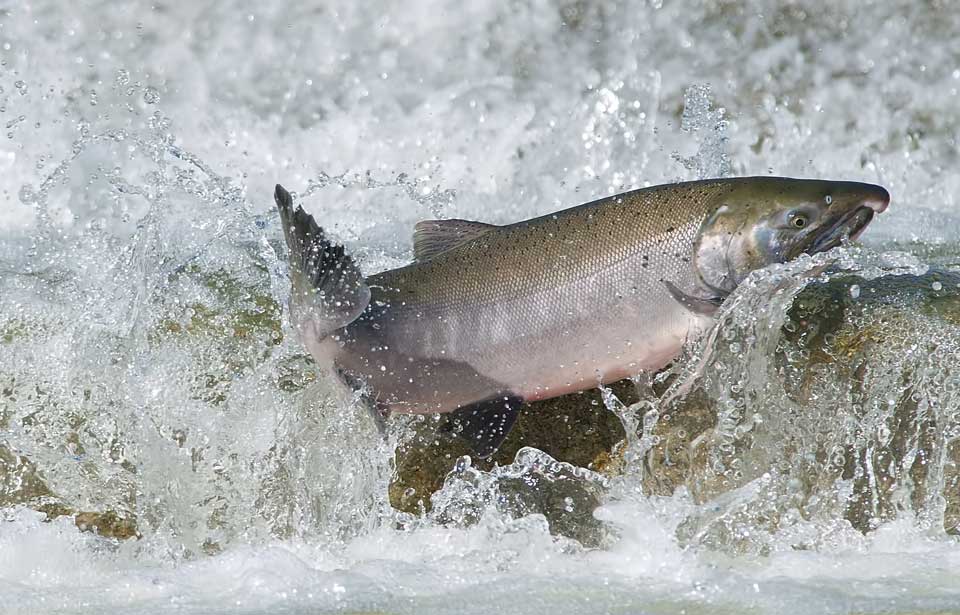 Status:  Not listed under SARA. Designated endangered by COSEWIC

Coho salmon return to the Interior Fraser River watershed during fall to spawn. The female turns onto her side and flaps her tail up and down to create a depression—called a redd—in the gravel of the river bed. When the redd is deep enough, the female will lay her eggs. All the while, the female is defended by a dominant male. While the eggs are laid, the dominant male releases sperm into the gravel nest. At times, other males may also deposit sperm. The female then covers up the fertilized eggs with gravel to protect them from predators, and begins to create another redd. Typically, a female will spawn in three to five redds, and lay between 800 and 1,000 eggs at each one. After spawning, the coho salmon defend their redds until they die some three to 15 days later. Young coho salmon fry emerge from the gravel the following spring and usually reside in freshwater for a year before migrating to saltwater. Interior Fraser River coho salmon spend 18 months at sea before returning to freshwater to spawn.

Having rapidly declined since 1996 by more than 60 percent, the Interior Fraser River coho salmon populations are still under threat from shifting marine conditions and deteriorating freshwater habitats. This population is also caught by other fisheries in coastal waters off Oregon, Washington and Vancouver Island, as well as in the Strait of Georgia and in the Fraser River.

The Interior Fraser River coho salmon is designated as endangered by COSEWIC and is under consideration for addition to the Species at Risk Act (SARA).

Several fishery management measures have been in place since 1998, including:

These measures are modified annually to reflect ongoing changes in the species’ status.

DFO will continue to build on the present signs of recovery for the Interior Fraser River coho by setting clear goals for each fishery based on the principles of the Wild Salmon Policy.

Additional management measures are being developed through the recovery planning process and implemented only after intensive consultation. Potential recovery measures being investigated include:

What can you do?
Interior Fraser River coho salmon will get the protection it needs only if all Canadians work together to reduce threats. Find out more about coho salmon and be aware of human-induced threats. Do your best to reduce these threats wherever possible. Get involved with the Habitat Stewardship Program for Species at Risk (HSP) or another conservation organization.