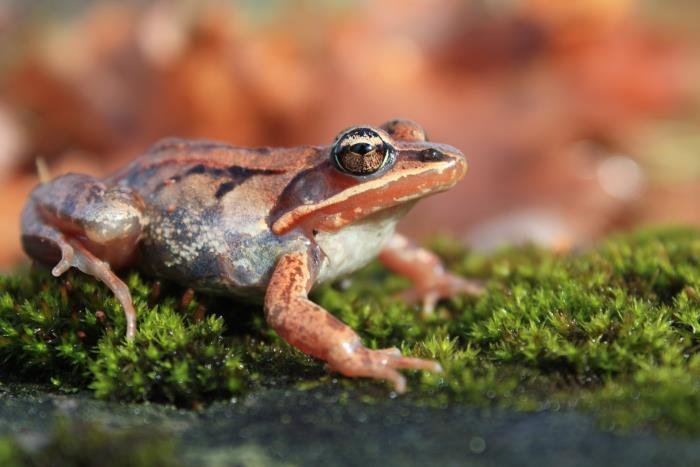 -is two species of small frogs, about the size of a grape

-is an amphibian; it needs both aquatic and terrestrial habitats to survive

-is at risk in Canada

There are two species of chorus frogs here in Canada: the Boreal Chorus Frog (Pseudacris maculata) and the Western Chorus Frog (Pseudacris triseriata). Prior to 1989, all Canadian chorus frogs were considered to be one species, as they are very similar – it’s even hard for scientists to differentiate them! Studies determined, though, that they are indeed different. While the Western Chorus Frog might have slightly shorter legs than the Boreal Chorus Frog, and that their respective calls have different structures, genetics have proven this.

Chorus Frogs are about the size of large grape, about 2.5cm long on average, with a maximum of 4cm. They are pear-shaped, with a large body compared to their pointed snout. Their smooth (although a bit granular) skin varies in colour from green-grey to brownish. They are two of our smallest frogs, but best ways to tell them apart from other frogs is by the three dark stripes down their backs, which can be broken into blotches, by their white upper lip, and by the dark line that runs through each eye. Their belly is generally yellow-white to light green.

Males are slightly smaller than females, but the surest way to tell sexes apart is by the fact that only males call and can inflate their yellow vocal sacs. Adults tend to live only for one year, but some have lived as many as three years.

Their tadpoles (the life stage between the egg and the adult) are grey or brown. Their body is round with a clear tail.

Because of their small size and colour, chorus frogs are very hard to spot in the vegetation. It’s easier to spot them in the spring, when males and sometimes females form large choruses. This loud call can be heard from a kilometre away.

Both species’ breeding call resembles the sound made by running a fingernail along the teeth of a comb. Their calls are very similar but they vary in pulse and length. Some confuse them with Spring Peepers, but unlike the peepers, which are most often heard at night, chorus frogs call night and day. The frequency of the calls increases with the temperature. Because chorus frogs have a complex life cycle, like most other amphibians, they need aquatic and terrestrial habitats to survive. Both species have similar needs, so their habitats tend to be alike.

Chorus frogs breed in a variety of aquatic habitats. Since most ponds, marshes or swamps are the habitat to fish and other animals that may predate on frog eggs and tadpoles, chorus frogs prefer to breed in ephemeral aquatic habitats. These temporary freshwater habitats appear in the spring, when the snow melts, creating shallow ponds that dry up as the weather becomes warmer. Chorus frogs also prefer spots where the water is still (with no current) and where there is vegetation. These ephemeral ponds may appear in fields, urban areas, woodland floors or roadside ditches.

After the breeding season, during late spring and summer, chorus frogs are found in forest openings or other open habitats close to their breeding habitats, or near ponds and other aquatic habitats with still water.

Chorus frogs are some of the few species that can actually survive being frozen. During the winter, they hide underground, under fallen logs or other forest debris until spring comes. When temperatures rise, their bodies thaw and the frogs become active again. Recently, genetic studies were made on different populations of chorus frogs in Canada. This helped establish that some populations (in Eastern Ontario and Western Québec) that were believed to be Western Chorus frogs were, in fact, Boreal Chorus Frogs! The distribution maps shown here take this change into account.

In Canada, the Western Chorus Frog is only found in southwestern Ontario. It’s also found on the north western side of the Appalachian Mountains in the United States.

The Boreal Chorus Frog lives in a much broader area. In Canada, it’s found in Saskatchewan, Québec, Ontario, the Northwest Territories, Manitoba, British Columbia and Alberta. It’s also found in most of the central United States all the way to Mexico. Given that the chorus frogs change quite a bit during their life cycle, they don’t eat the same things at all from one stage to another.

The frogs’ tadpoles, which are exclusively aquatic, eat tiny things floating around like microscopic algae and pollen. Adults, which live both on land and in water, will eat small flies, mosquitoes, ants, small beetles, moths and caterpillars, grasshoppers, spiders, slugs and snails. They do not eat during the winter. Chorus frogs breed very early in the spring, sometimes before the winter ice has completely melted. As soon as temperatures rise, males start calling with their distinctive song in order to attract females. The timing may vary from place to place, but typically, this happens from late February to early May and lasts only a couple of weeks.

After mating, females will lay from 500 to 1500 eggs in small groups attached to vegetation, under water.

These eggs will take from three days to two weeks to hatch, depending on water temperature, giving birth to tadpoles.  These tadpoles finish metamorphosing into froglets by early summer or midsummer, and will be mature adults in late summer. Out of all the eggs laid, only a small fraction will survive to adulthood. At any life stage, chorus frogs have a variety of predators including insects, leeches, salamanders, fish, snakes birds and mammals. Chorus frogs normally live only one year and rarely longer than three years. In Canada, most chorus frog populations seem to be healthy, except the Great Lakes / St. Lawrence - Canadian Shield population. Initially, this population was thought to be Western Chorus Frogs (it is still recognized as such under the Species at Risk Act), but new genetic information suggest that they are Boreal Chorus Frogs. At any rate, this population is at risk with the Threatened status.

Theses frogs are threatened by ongoing losses of habitat and breeding sites. Because of suburban expansion and alteration in farming practices, their habitat has become fragmented in isolated patches. Pollution, climate change, invasive species and collisions on roads are also threats to chorus frogs.

Populations which are at risk are thought to have declined (in Québec, at a 37% rate, and in Ontario, at a 30% rate) over the last 10 years and are expected to continue to decline if the threats aren’t alleviated. The best thing you can do to help these small frogs is to report them when you hear them in the spring! Scientists at the Canadian Wildlife Federation are currently studying the chorus frogs and trying to find where, exactly, they are living. If you hear chorus frogs, flag them by entering your observation on iNaturalist Canada! Species at Risk Registry, Taxonomy Issues between the two species