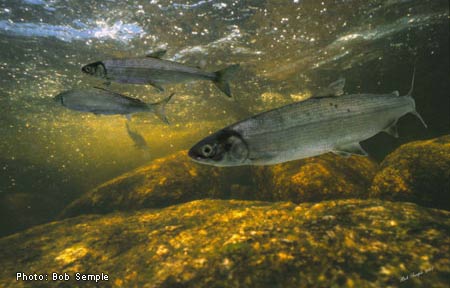 Previously known as the Acadian whitefish

This species belongs to the salmon family. Both land-locked and anadromous—meaning it spawns in fresh water but spends much of its life at sea—populations were known to occur. However, there is no current evidence that anadromous populations still exist.

The Atlantic whitefish has silvery sides, a silvery-to-white belly, and a dark blue-to-dark green back. The fish has an elongated body and a mouth at the end of its snout rather than under its head. Adult fish range from 18 to 40 cm in length. The Atlantic whitefish’s dorsal fin and forked tail fin are dusky in colour; the lower fins are light. The Atlantic whitefish also has a small, fleshy fin between the dorsal and tail fins, which is typical of members of the salmon family.

Anadromous Atlantic whitefish were believed to inhabit coastal waters during the summer months. Evidence suggests that they fed on amphipods, small periwinkles and marine worms.

Land-locked populations occur in three lakes within Petite Riviere. Since they prefer cool water, they are rare or absent in surface waters during the summer months. During the spring and fall they feed on small fish and invertebrates.

Spawning times in the wild are unknown, but in captivity, Atlantic whitefish spawn from mid-November to early January. Why it’s at risk

The damming of the Tusket River in 1929 interfered with the migratory movement of the Atlantic whitefish for many years and may have been a factor in the extirpation of the river’s anadromous population. Also, rising acidity in some portions of the river may have negatively affected their reproductive success.

A lack of fish passage between the sea and the lakes in Petite Riviere may be a factor in the decline of the anadromous population in the area. Non-native fish in the Petite Riviere watershed, such as the smallmouth bass have been illegally introduced and may pose a significant threat to the last remaining population of Atlantic whitefish. Poaching and recreational fishing (the fish is often mistaken for lake whitefish) were also believed to have also contributed to the species’ decline in the past.

The Nova Scotia Fishery Regulations under the federal Fisheries Act have prohibited the taking of Atlantic whitefish from all waters of the province since 1970. The fish’s habitat is also protected.

A recovery program under the Species at Risk Act (SARA) is underway. This program will clarify the Atlantic whitefish’s present distribution, life history and habitat requirements, determine the impact of non-native fish populations, and develop captive-breeding programs to support re-establishment of self-sustaining populations. Recovery actions taken to date include: closure of recreational angling in sensitive migration and staging areas;
creation of monitoring programs to assess the current range of both land-locked and anadromous populations;
assessment of habitat requirements to assist with protection of the remaining populations and to plan for eventual re-introduction; evaluation of the genetic health of the remaining populations; and, review the threats posed by invasive smallmouth bass and chain pickerel on the survival and recovery of Atlantic whitefish.

What can you do?

Angling for Atlantic whitefish is strictly prohibited—so observe the closure times and areas for angling on Petite Riviere. If you see or accidentally catch what you believe is an Atlantic whitefish, make a note of location and date, and the size and the general appearance of the fish. Then release it and notify one of these fisheries departments:

Atlantic whitefish will get the protection they need only if all Canadians work together to reduce threats. Find out more about Atlantic whitefish, take active steps to protect their habitat, and get involved with the Habitat Stewardship Program for Species at Risk (HSP) or another conservation organization.

The Nova Scotia government is involved with many projects and programs to conserve Atlantic whitefish. The Adopt-a-River program, for example, helps Nova Scotians to rebuild, enrich and maintain local water environments.

Text: Department of Fisheries and Oceans Canada with background information provided by Environment Canada in 2004