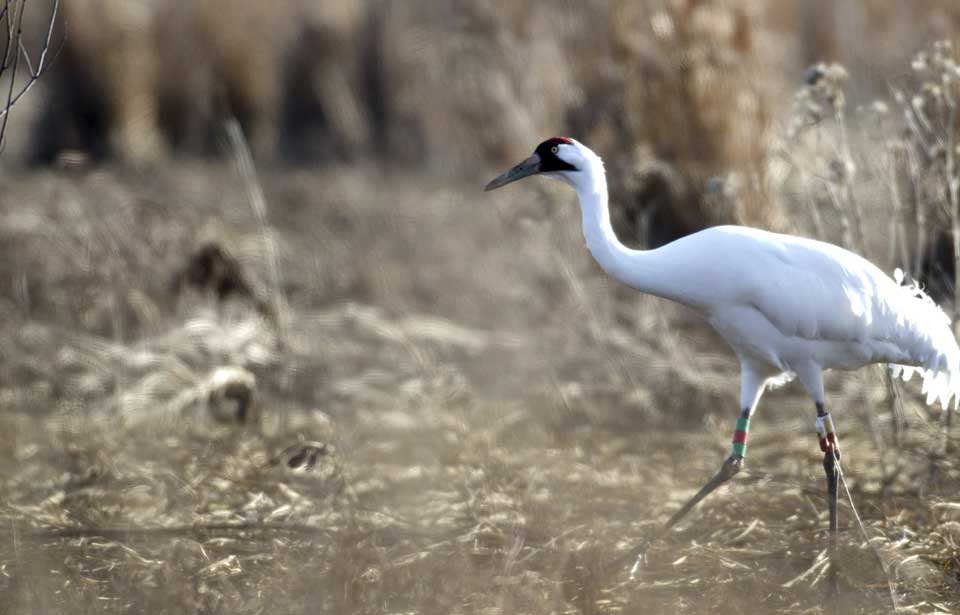 The Whooping Crane Grus americana, or whooper, is the most famous endangered bird in North America. It is famous partly because it is large, distinctive, and photogenic and partly because, since 1967, Canadians and Americans have cooperated in a successful recovery program to save it from extinction.

The adult Whooping Crane is the tallest North American bird. It has a long neck, long dark pointed bill, and long thin black legs. A large male is about 1.5 m tall. In the air, the wings measure 2 m or more between the tips of the long black primaries, or flight feathers, which cannot usually be seen when the bird is at rest. At close range, the adult Whooping Crane is an imposing bird, with snowy-white plumage, black bristlelike feathers on crown and face, a small black patch on the back of the head below the crimson crown, and bright yellow eyes. The juvenile bird has dark brown eyes and cinnamon-and-white plumage. In both adults and juveniles the white wings are tipped with black.

A flying Whooping Crane can be distinguished from other large white birds by the long neck extended forward and legs that trail equally straight behind. Birds often confused with the Whooping Crane are the American White Pelican, the Tundra Swan, and the Lesser Snow Goose. All three species are mostly or entirely white but, in flight, none has long legs trailing behind.

There are 15 species of cranes in the world today. The Whooping Crane and the Sandhill Crane are the only wild cranes in North America. Sandhill Cranes are slaty grey or brown and often occur in large flocks; they are smaller than whoopers and still relatively numerous.

The Whooping Crane takes its name from the bird’s distinctive whooping call. During the early spring courtship, a pair of birds may perform a duet, or unison call. A nesting whooper frequently bugles loud and clear during the early morning hours. This sound carries over several kilometres, and it is used by adults to advertise their breeding territory to other Whooping Cranes. Adult birds at the nest use a strange growling sound to communicate with newly hatched chicks. The nesting habitat of the Whooping Crane consists of marshes, shallow ponds, small creeks, and patches of wooded terrain and shrubs. Winter habitat consists of salt or brackish tidal marshes, tidal flats, freshwater upland ponds, and grassland. The birds also have traditional spots in Saskatchewan where they return each fall during migration. Here, the habitat consists of fields of barley and wheat stubble and wetlands.

The sight of a pair of these magnificent white cranes flying over the quiet solitude of a northern marsh or prairie is unforgettable. When the weather is good and the winds favourable, a migrating Whooping Crane flies like a glider, on fixed wings. The bird spirals upwards (aided by thermal activity), glides down, dropping as low as 70 m above ground, and then begins spiralling upwards again. This spiralling and gliding, carried out when the cranes encounter suitable thermal updrafts, is energy efficient and allows the cranes to fly nonstop for incredible distances.

From 1977 to 1988, wildlife biologists captured 134 70-day-old juveniles on the breeding range, attached brightly coloured plastic bands, and then released them. These markings have allowed biologists to identify individual cranes in the wild and to learn about the life history of Whooping Cranes. During 1981, 1982, and 1983, 15 of the juveniles were also equipped with small radio transmitters that enabled Canadian Wildlife Service and U.S. Fish and Wildlife Service staff to track cranes and obtain detailed information on their migration. They learned that average daily flight distance, flight duration, and ground speed are normally about 400 km, 7.5 hours, and 53 km per hour, respectively; and that nonstop flights of 10 hours, covering 750 km, are not unusual. In 1984, they tracked a crane wearing a radio transmitter at a record wind-assisted ground speed of 107.5 km per hour. They observed most migrating whoopers at altitudes below 600 m above ground level, but they found that high altitude migration was not unusual. The highest recorded flight was 1 950 m.

The flock winters in Texas, where it occupies about 90 km2 along the coast. The United States government designated this area as the Aransas National Wildlife Refuge in 1937, partly to preserve suitable wintering habitat for the Whooping Crane.

During the summer, family groups spend their time in the shallows of small ponds and marshes. Here the adults perhaps find larval, or inactive, forms of insects such as dragonflies, damselflies, and mayflies, and also snails, small clams, water beetles, leeches, frogs, and small fish to feed their young. When the parent birds kill larger prey, such as snakes, mice, small birds, ducklings, and even birds up to the size of half-grown bitterns, they share these with their young.

Each fall, Whooping Cranes migrate south to their wintering grounds in Texas. The birds spend the winter feeding and resting. In early spring, while still on the wintering grounds, pairs of cranes whoop and dance as part of courtship. Dancing intensifies until the migrants depart in mid-March. The breeding pairs begin arriving in northern Wood Buffalo National Park during the third week in April, and each pair establishes a territory of from 3 to 5 km2 in relatively dense nesting areas, to 12 to 19 km2 in isolated breeding areas.

Whoopers usually build a nest in marshes or shallow ponds, in about 25 cm of water—so that the flightless chicks can swim to escape predators—and most often in relatively dense stands of bulrush. Whoopers sometimes build on a small islet and on rare occasions on firm ground. Some years ago a pair built a unique floating nest in a small pond. A typical nest is built of bulrush, measures just over a metre across, and rises about 15 cm above the waterline.

A pair usually has two eggs. Both eggs generally hatch, but if both eggs are left in the nest, usually only one chick survives. The reason for this is unclear but may be related to a food shortage, particularly when wet areas begin to dry out and terrestrial predators, such as the gray wolf, are able to penetrate the cranes’ nesting marshes.

The eggs take 29 to 30 days to hatch. Both parents share the task of incubating, or keeping the eggs warm in the nest, during this period. Few eggs are lost to predators, thanks in part to the vigilance of the adult birds. The reddish-orange young hatch during the last week in May or the first week in June. From then on, the parents are kept busy feeding their chicks. During the summer, the cranes rarely fly. Some birds may be incapable of flight during short periods due to the moult, or shedding, of major wing feathers.

By the end of September or early October the young birds are ready to try their wings on the 4 000-km migration to the Texas winter range. On the way south, the birds spend one to five weeks feeding in their staging, or stopover, areas in Saskatchewan. In these areas, undisturbed whoopers may spend the entire staging period on the same quarter or half-section of land. Here the birds fatten up on waste barley and wheat in stubble fields, and roost during the night in nearby wetlands.

Naturalists have been concerned for many years about the possible extinction of this magnificent bird: they believe destruction of breeding habitat was the main reason for its decline. The population was estimated to be between 1 300 and 1 400 birds in 1860. Whooping Cranes were hunted openly up to the early 1900s but were never numerous enough to be an important target for hunters. The birds were protected by law in 1916, but nonetheless the population continued to decrease. By 1941, only about 22 wild Whooping Cranes remained, six of them in a nonmigratory population in Louisiana that became extinct in 1950 as a result of a severe storm. The other 16 birds are the ancestors of today’s wild flock, which, after careful management, numbered about 150 cranes in 1993.

Increased industrial development in the north and elsewhere heralds difficult times for the Whooping Crane. Power lines, microwave towers, and other structures common in southern North America are hazardous to flying birds; several Whooping Cranes have flown into overhead wires and died.

Great concern exists about the continued passage of ship traffic through the whoopers’ winter range in Texas. Spillage of a ship’s cargo of oil or chemicals could make the area uninhabitable for cranes or kill the birds outright. Boat traffic also causes erosion of shorelines and loss of habitat.

In early June 1967, a team of Canadian and U.S. scientists took six eggs from Wood Buffalo National Park nests (one egg from each clutch of two eggs) for artificial incubation. The Canadian Wildlife Service biologist flown in by helicopter waded through the marshes to collect the eggs. The collected eggs were placed in a special portable incubator, heated by hot water bottles, and flown to the Patuxent Wildlife Research Center near Laurel, Maryland. Between 1967 and 1991, 128 whooper eggs (of which 93 were viable) were collected with the intention of establishing a captive flock and eventually releasing offspring to bolster the wild population. Unfortunately, the cranes often failed to breed in captivity and captive birds were prone to disease.

The nest disturbance did not prevent the adult whoopers from successfully hatching the remaining eggs. In fact, recent studies have shown that by ensuring that the one egg that remains in each nest after the removal of surplus eggs is alive (this is done by testing the eggs at the nest and replacing dead eggs with living ones), the scientists have actually increased hatching success in the park. The Northwest Territories Texas population increased from 43 to about 150 birds between the beginning of egg collection in 1967 and the fall of 1993.

From 1975 to 1989, another idea was tested. Another 200 eggs collected from Wood Buffalo National Park were shipped by air to Grays Lake National Wildlife Refuge in Idaho and placed in the nests of Greater Sandhill Cranes. The Sandhill Crane eggs were removed, and the adults hatched their "foster-eggs" and raised the chicks.

This attempt to found a second wild population has not succeeded. Lack of pairing by these Whooping Cranes is probably due to improper imprinting or inappropriate behaviour learned from foster parent Sandhill Cranes.

The Whooping Crane has been fortunate because it is an attractive bird and its plight has been dramatized and public opinion effectively mobilized in its support. Nevertheless, the support of the Canadian public for the management of whooper nests and eggs in Wood Buffalo National Park will have to continue for many years before the population can increase to a safer level. Preservation of wetlands along the cranes’ migration route will ensure that the birds can find suitable places to rest and feed en route. Publicity and hunter education are necessary to help prevent the shooting of Whooping Cranes during their migration. To assist the Canadian Wildlife Service in providing protection to Whooping Cranes, people who observe the birds on the prairies and elsewhere in Canada are encouraged to call the toll-free number (306) 975-5595, a 24-hour answering service during the migration period.

All About Birds, Whooping Crane