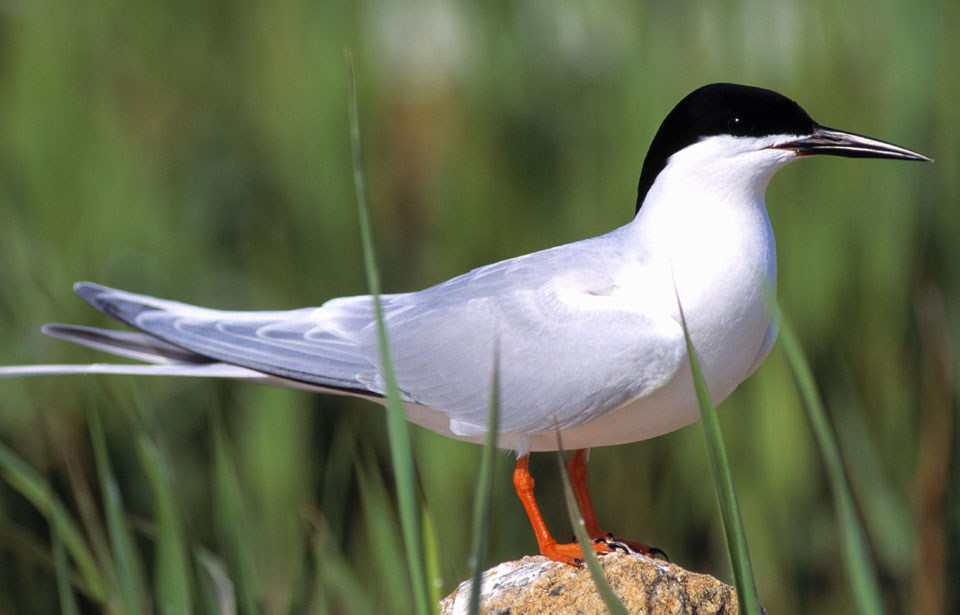 The Roseate Tern Sterna dougallii is a seabird that resembles a small gull, but it has the typically slender body, short legs, and long, pointed wings of all terns. It is closely related to the Common Tern Sterna hirundo and the Arctic Tern Sterna paradisaeaand is frequently found in their company. For these reasons, the Roseate Tern is not easy to identify (see drawings). It is a paler grey than Arctic and Common terns, and its tail streamers are considerably longer.

The adult Roseate Tern is 33 to 34 cm in length and has a wingspan of 72 to 80 cm. At a weight of approximately 100 to 120 g, an adult is slightly smaller than a Mourning Dove. It has a black forehead and nape, and its upper wing is a pale grey. Its tail is white with deeply forked outer feathers that give the impression of long streamers when the bird is in flight. The underside of the tern is white, tinged with pink early in the breeding season; however, this pale rosy tint is not a good field mark, or identification characteristic, because it varies from bird to bird, and the colour tends to be bleached out by the sun. The legs and feet are reddish, and the bill is mostly black, although bills of breeding birds may be red at the base. Male and female birds look alike. The head of the nonbreeding adult is mottled black and white.

The juvenile Roseate Tern has a mottled greyish back and rump and dark bill and legs. Chicks are unevenly covered with down, giving them a spiky appearance; their legs are dark purplish to black.

All terns have a harsh cry, but the Roseate Tern has a distinctive, two-syllable call — kir-rick. This is often the best way of confirming its presence at a colony.

Roseate, Common, and Arctic terns nest together to take advantage of the benefits of living within a colony. All species of terns join together to threaten and mob invading predators.

The Canadian breeding population of Roseate Terns is estimated at fewer than 140 pairs. These are concentrated on a few islands off the Atlantic coast of Nova Scotia. Small numbers nest on the Îles-de-la-Madeleine, and a pair occasionally nests on Machias Seal Island, a migratory bird sanctuary in the Bay of Fundy. A few nest on Sable Island.

The Roseate Tern breeds on coasts and islands in the tropics along the Indian, Pacific, and Atlantic oceans and in temperate zones of North America and Europe, South Africa, and western Australia.

Only three percent of the population breeds in Canada, which is at the northern limit of the Roseates’ breeding range. Today the Canadian breeding birds are estimated at fewer than 140 pairs, concentrated on a few islands off the Atlantic coast of Nova Scotia. Small numbers nest on the Îles-de-la-Madeleine, and a pair occasionally nests on Machias Seal Island, a migratory bird sanctuary in the Bay of Fundy. A few nest on Sable Island.

Adult North American Roseate Terns return from their non-breeding areas to reach their breeding colonies during May. They leave the colonies shortly after their young have fledged, or taken their first flight. In late July, they begin moving to staging areas such as Sable Island, Nova Scotia; Cape Cod, Massachusetts; and Long Island, New York, migrating a few weeks later to their non-breeding grounds off the coasts of South America. Data from bird banding, or tracking birds by placing numbered aluminum bands around their legs, reveal that some are found in Guyana in November and December; however, it is unclear where they spend January to April. Recently, some have been found in eastern Brazil. There is speculation that they may go to sea and become pelagic, or live on the open ocean.

Roseate Terns feed in salt water on small fish, most frequently sand lance but also white hake, juvenile herring, mackerel, gadids, cod, pollock, and haddock. They plunge into the water in a high dive to catch their prey and can immerse themselves completely and "fly" under water short distances in pursuit of fish. They prefer to fish in rips, or places where currents meet, and other turbulent waters and will hunt for food as far as 20 km from their colony. The birds usually carry one fish at a time in their bills but occasionally will carry more. They will steal fish from other terns and are often the victims of similar piracy by gulls and even crows and ravens.

Evidence suggests that immature birds remain in the south during their first potential breeding season. Many two-year-olds return to the nesting colony. A few of these may breed, but most young Roseates wait until they are three or four.

After Roseate Terns arrive in their breeding colonies in early to mid-May, the pairs begin courtship displays. These displays include an elaborate, ritualized flight in which the male, often carrying a fish, ascends in circles high into the air, closely followed by one or more females; the male and the lead female descend together in a zig-zag glide. Courtship feeding—the presentation of fish to the female by the male—helps compensate the female for the energy used in egg production.

Roseate Terns often choose nesting sites that provide cover and usually hide their nests under dense grasses and other plants, boulders, or washed-up debris. The nests are not much more than a bare scrape in sand or rubble.

The birds begin laying eggs by late May. The usual clutch, or set of eggs, contains one or two eggs laid two to three days apart. Incubation, or warming the eggs until they hatch, begins when the clutch is complete. The parents take turns incubating the eggs for 23 to 24 days. After the chicks hatch, they stay near the nest area where they are guarded and fed by both parents. Several days later, the chicks leave the nest to find new hiding places. Although some parents are able to raise two chicks to fledging, or first flight, the second chick usually starves because the adults, who must sometimes fly long distances to find food, cannot provide enough for both. Chicks fledge 25 to 28 days after hatching and leave the colony with their parents within a few days. Their parents tend them for at least six weeks after fledging, while they learn to fish on their own.

With a total world population of about 50 000 pairs, the Roseate Tern is not considered endangered globally, but nowhere is it abundant, and it has suffered major declines in all parts of the world.

No one knows how many Roseate Terns nested in North America prior to the end of the 19th century. Early reports say only "thousands." We know that when the species was being hunted in the 1890s (because its elegant tail feathers were in demand for use on hats), there were only 2 000 pairs. With protective legislation, the North American population of Roseates grew by the 1930s to 8 500 pairs: they nested in scattered colonies along the eastern seaboard as far south as South Carolina. Since the 1950s, due to loss of nesting habitat, predation, and trapping in the locations they occupy during the non-breeding season, the total has fallen to 3 800 pairs, and the colonies now extend only as far south as Long Island in New York.

The Canadian birds are considered “endangered” by the Committee on the Status of Endangered Wildlife in Canada. The U.S. Fish and Wildlife Service (USFWS) has designated Roseates that breed in the northeastern United States endangered as well. A Roseate population close to North America, the Caribbean breeding population, has also declined, and the USFWS lists it as “threatened.”

Although Roseates hide their nests and young, they are still subject to losses from gull, crow, and raven predation. The explosion in gull populations during the 20th century has created a twofold problem for the Roseate Tern. First, some individual gulls specialize in preying on terns and will take eggs, chicks, fledglings, and even adults. Second, gulls take over colonies established by terns. Because gulls start their nests earlier than the terns and are much larger and more aggressive, they occupy the best sites. Frequently, this leads the terns to abandon their colony in search of new locations, preferably near-shore islets and other places remote from human disturbance. With increasing human development of coastal areas, suitable locations are becoming much more scarce.

Roseate Terns also face difficulties during the non-breeding season. They spend at least part of the non-breeding season on the northeastern coast of South America. After spending the day at sea, they return to beaches to roost, becoming easy prey for trappers who catch them for food. Although South American biologists and governments discourage trapping, it remains a cause of mortality. In Canada this practice has been illegal since 1917: Roseates and other terns are protected under the Migratory Birds Convention Act, which makes it illegal to capture, kill, or take individuals, nests, or eggs.

In North America, the Roseate Tern population is concentrated in a relatively small number of nesting colonies. Consequently, any declines in the fish stocks that it feeds on — for example, due to commercial fishing, chemical pollution, or oil spills — could have disastrous results. The species is also vulnerable to direct disturbances, such as human activity near colonies, ecotourism, egging, netting of adults, and domestic and introduced predators.

In Canada, it is important to continue to eliminate open municipal dumps and to stop disposing of fish wastes from fishing vessels and factories: such dumps and disposal have contributed to the gull population explosion in the last half of this century. People who live near or use the sea for work or pleasure must take care to protect the terns and their habitat from contamination. They must also respect the privacy needed by terns and other bird species at their breeding colonies.

Protection of tern nesting colonies is critically important to the survival of Roseates. Because Roseates always nest with other terns, colonies of Common and Arctic terns must be protected as well. The Nova Scotia Department of Natural Resources has established wildlife management areas at two colonies, and protection options are being explored jointly by provincial biologists and the Canadian Wildlife Service of Environment Canada for another major Roseate Tern colony. Strict protection is provided for birds nesting within wildlife management areas and migratory bird sanctuaries. As well, gulls, crows, and ravens must be discouraged from nesting on islands with colonies of Roseate Terns. CWS and some partners have begun to explore the use of various nonlethal control measures to create and maintain "gull-free" islands.

Wildlife biologists are optimistic about the future of the Roseate Tern in Canada. Their optimism is grounded partly in the success of colony management in the United States with its much larger share of the Roseate population. Their optimism is also based on the detailed plan that RENEW, a committee made up of representatives of Canadian government and non-government wildlife organizations, now has in place to rescue the Canadian-breeding birds. Recovery strategies include maintaining productivity levels at more than one fledgling per pair per year, having a sufficient number of predator-free breeding sites for the terns, reducing abnormally high gull populations by reducing the amount of food available to them from dumps and fishery wastes, and promoting the protection of terns on their winter range.

All About Birds, Roseate Tern