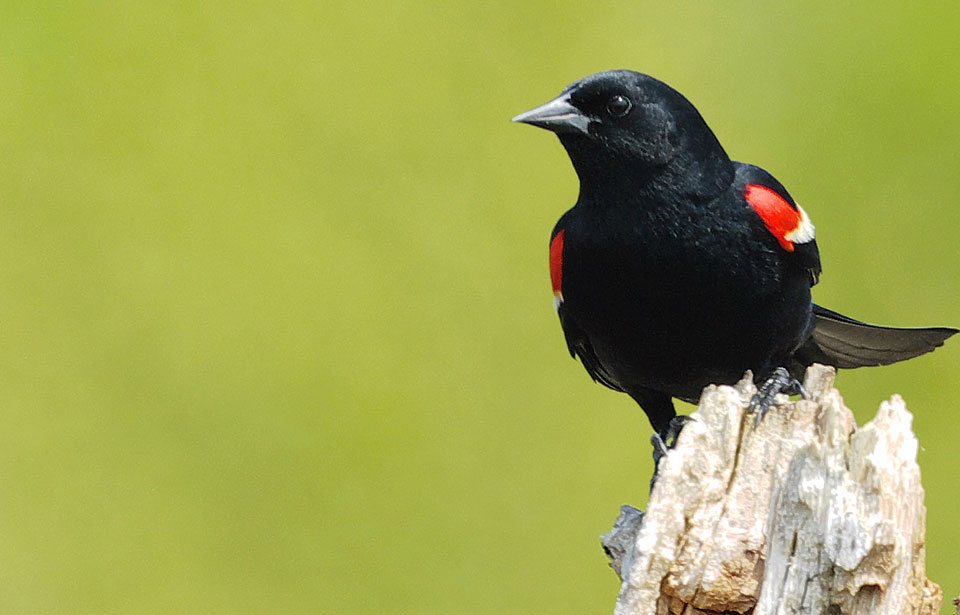 Male red-winged blackbirds are black with distinctive red epaulets on their shoulders. Sometimes the red is concealed with only a yellow margin showing. Immature males also have red shoulder patches but can be sooty-brown and appear mottled.

Red-winged blackbirds are medium-sized song birds with a length of approximately 17 to 23 centimetres and weigh 32 to 77 grams. Females are somewhat smaller than males.

Females, very different in appearance from adult males, are brownish and have streaked breasts. Females are often mistaken for other blackbirds or large sparrows.

Red-winged blackbird calls sound like loud check and a high slurred tee-err sound when alarmed.  Their song is a liquid gurgling konk-ke-ree...

Red-winged blackbird habitat includes a variety of wetlands including marshes (freshwater and brackish) and swamps.  They are also known to inhabit uplands like hayfields, croplands, meadows and oil fields and sometimes wooded areas along waterways and open patches in woodlands.

These well-known birds are one of the first signs of spring in Canada.  Their spring migration takes place from mid-February through mid-May.  Their fall southern migration begins as early as August.  The male red-winged blackbird returns before the female in the spring and leaves after the female in the fall. They migrate in large flocks and travel during the day. Flock of birds, including red-winged blackbird.

Red-winged blackbirds range from northwestern British Columbia and Alaska to southwestern Newfoundland and south to Costa Rica, the northern Bahamas and Cuba. Red-winged blackbirds eat mostly seeds, grains, berries and wild fruit and in summer will also eat insects, caterpillars, grubs, spiders, mollusks and snails.  They are able to walk, run or hop while foraging on the ground.

The red-winged blackbird is a polygynous species, meaning the male mates with more than one female in a single breeding season. In fact, one male can have as many as 15 different females nesting in his territory

Red-winged blackbirds can have two to three broods per year. Their nests are woven cups made of marsh vegetation lined with fine grasses fastened to reeds, deep grass and bush. They lay three to five, usually four, bluish-green spotted eggs that the females incubates for approximately 11 to 13 days. The main threat to red-winged blackbirds is habitat loss due to drainage of wetlands for development and agriculture.

As with many other birds, red-winged blackbirds are vulnerable to pesticides in the food chain.

All About Birds, Red-winged Blackbird