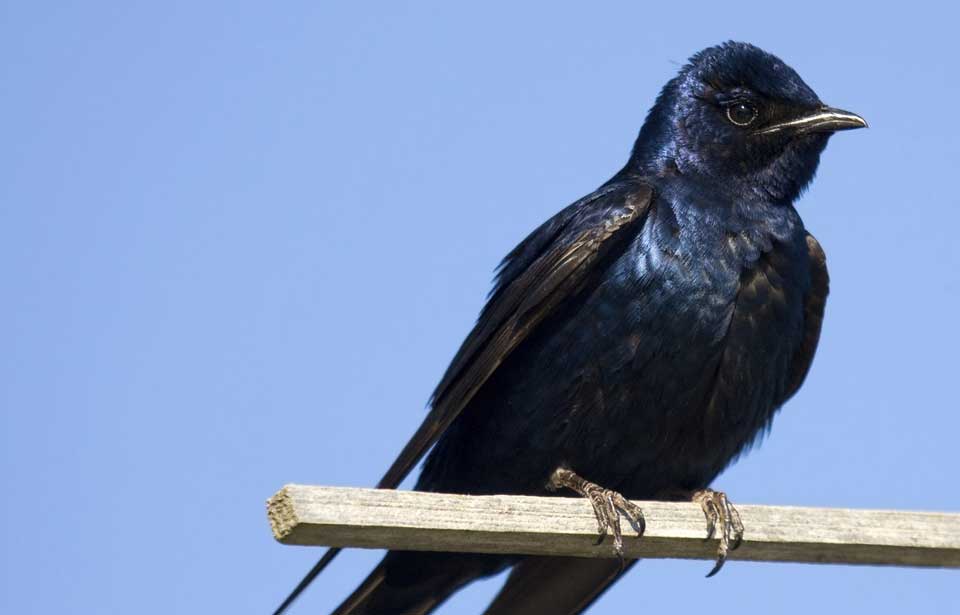 The Purple Martin Progne subis is a conspicuous bird in many populated areas of North America during spring and summer. Averaging 17 to 20 cm in length, it is Canada’s largest swallow. The Purple Martin resembles other swallows in having a slender body, long wings, and a wide beak. The tail is forked but not deeply as in some other swallows. Male martins, with their dark plumage, often appear to be black, but on bright sunny days their shiny blue-black coloration is clearly visible. Female martins are lighter in colour, with a pale grey throat and belly.

By the time they have left the nest, young martins of both sexes resemble adult females. Young males only become dark at their second breeding season.

The call of the martin is a series of loud, distinctive, gurgling notes. In flight, martins alternate short glides with rapid flapping. Like other swallows, they are superb fliers, changing direction often as they pursue flying insects.

Everywhere the Purple Martin breeds, including parts of the continental United States, Mexico, and Cuba, it prefers open areas, especially if lakes or marshes are near by.

Martins have been banded, or tracked by placing a numbered aluminum band around the leg, for many years. Recoveries of banded martins have provided extensive information about the movement of these long-distance migrants. Of the adult birds banded and sighted again, most had returned to the breeding colonies where they were banded or to one near by. Banded nestlings have also typically returned to their home colonies to breed, although a few young bred hundreds of kilometres from their birthplace.

The ability of martins to find their colony is remarkable. In one experiment, adults that were transported several hundred kilometres from their nesting colonies returned in a matter of days.

Banding has also provided information on the lifespan of martins. Most martins live to four or five years. The oldest martin on record is an eight-year-old recaptured at its breeding colony.

Their splendid flight, pleasant sounds, and the fact that Purple Martins eat insects have led to great efforts to attract these birds. Human-made martin houses are common in both the cities and the country.

The Purple Martin breeds throughout much of southern Canada, including Nova Scotia, the southern portions of New Brunswick, Quebec, Ontario, and Manitoba; southern and central Saskatchewan; and north-central Alberta. In British Columbia, martins are found in the Peace River region, southern Vancouver Island, and the extreme southwestern mainland. Martins are much less common in western Canada than in the eastern provinces.

Martins arrive in Canada in early spring, usually in early April in Quebec and Ontario and from late April to early May in other areas.

Martins begin their southward migration within three weeks of the young leaving the nest. The adult males are the first to leave, followed shortly by the adult females and immature birds. The southward migration normally begins in July, and most birds have gone by the end of August. Martins often gather in enormous flocks during the trip. These flocks will stay in an area for several days if the feeding conditions are good. Several migration routes are followed. In the west, many birds follow the coast and then move south through Central America. In the east, martins either cross the Gulf of Mexico or follow the Caribbean islands south from Florida to Trinidad.

The birds settle for the nonbreeding season over a large area in South America, from southeastern Brazil northward and westward to the eastern portions of Bolivia and Colombia and northward to the southern Caribbean islands. A marking study undertaken by ornithologists, or bird experts, from Brazil and the United States indicated that Purple Martins that nest in widely scattered locations across the United States and Canada may be found roosting in cities in the state of Sao Paulo in southern Brazil during the winter. Unfortunately, very little is known about the habits of martins on their nonbreeding grounds.

Martins consume a variety of the larger flying insects, including dragonflies, moths, butterflies, house flies, horse flies, and deer flies. Since they tend to feed on whatever is most easily available, their diet varies with the time of year and time of day. On cool, cloudy days, martins feed low over the ground where insects tend to congregate, and they sometimes pick insects off the ice and water of freezing ponds. In warmer weather, insects fly higher and the martins may hunt for food 30 to 40 m in the air. On warm summer mornings Purple Martins can be seen flying over 300 m high, catching noctuid moths that have been migrating in warm updrafts all night. Despite a widely held popular belief that Purple Martins control mosquito populations, it seems unlikely that they do so to any extent. Most food studies of martins have failed to find much evidence of mosquitos or other small insects in their diet.

Martins arrive in Canada in early spring, usually in early April in Quebec and Ontario and from late April to early May in other areas. The birds arrive singly or in small groups, and the males, who usually arrive a few days before the females, start to search for potential nesting sites.

Although the timing of the martins’ arrival varies somewhat from year to year, depending on the weather, an early arrival seems to be important. It allows the species to claim more of the limited number of suitable nesting sites before these are occupied by sparrows and starlings. Because of their early arrival, martins are sometimes caught in cold snaps and late winter storms. If temperatures are low enough to severely reduce insect activity for several days, many martins may die of starvation.

Martins usually nest in colonies, although some pairs nest alone. In wild places, martins still seek out their traditional nest sites in cliff crevices, abandoned woodpecker holes, and hollow trees. In settled areas, most pairs form colonies in multi-compartment Purple Martin houses; others nest alone in regular one-room bird houses. In spring, competition for nesting compartments in martin houses is sometimes fierce as newly arrived males attempt to take over occupied rooms. Indeed, in spring it is not uncommon to see two birds flutter to the ground while fighting over a room. Usually, the male that first occupies the room is able to keep out all intruding males. Male martins sometimes defend several rooms at once in an apparent attempt to attract more than one female.

When the female arrives she immediately begins "house-hunting." She may enter many rooms of the martin house before choosing a site and a mate. Once the pair has settled down in its room, two to three weeks elapse before they build a nest. The partners build the nest together, using twigs, leaves, mud, and, if available, feathers.

Martins typically lay one clutch, or set, of four or five dull white eggs, each weighing 3 to 5 g, per summer. (Cases of apparent renesting are usually attributable to a new pair laying eggs in a recently deserted nest.) Females do all the incubating, or sitting on the eggs to warm them until they hatch, although males may also enter the nesting compartment during incubation. The female spends 70 to 80 percent of the daylight hours incubating the eggs, which hatch after 15 to 18 days. The hatchlings have no feathers and so the female broods, or warms, them until they are seven or eight days old. During the first 12 days in the nest, the young martins grow from about 3 g at hatching to 40 to 45 g. If another colony member should land at a pair’s nesting compartment, it is vigorously driven away.

Over the next two weeks, young martins increase in weight only slightly. Both parents feed the young, although females usually provide more food than males. Martin parents may feed their brood up to 60 times per day. As with other swallows, young martins remain in the nest for a long time, typically 28 to 35 days. This long period is apparently necessary for the full development of the flight feathers. After leaving the nest on their first flights, young martins sometimes return briefly to the nest site where they continue to be fed by the parents.

The overall number of Purple Martins in North America has increased since 1966, but local population trends vary. Analyses of data obtained from annual surveys of breeding birds indicate that over this period martin populations increased in the southern and central parts of their range, decreased in the northern United States, and showed no significant trend in southern Ontario and Quebec. The data show some abrupt regional population changes, which have usually been attributed to periods of bad weather. Predators, parasites, competitors for nest sites, and habitat changes also have important effects on the sizes of local and regional populations.

While Purple Martins have few natural predators, raccoons, squirrels, snakes, and cats do occasionally climb the mounting-pole of a martin house to prey on the eggs and birds. The nesting colony should be protected with a predator guard cone sticking out from the pole by at least 20 to 60 cm. Greasing the pole will also discourage climbing. Unfortunately, martins remain vulnerable from the air, because falcons and other raptors can catch the birds in flight, and parasitic flies can lay their eggs in martin nests. The larvae of these flies suck blood from the nestlings and may weaken or kill them.

A martin house placed high on a pole in the centre of the largest opening on a property will encourage the nesting of these endearing birds. When putting up a martin house, it is important to take certain precautions. While 20 to 30 pairs will often nest in a single martin house, the birds seem to prefer several smaller houses, each with 12 to 20 rooms, to large apartment-style colonies with hundreds of rooms. Improperly designed martin houses are a serious problem. If the nesting rooms are too small, the nestlings may die of overheating on hot summer days. To prevent the overcrowding of nestlings, nesting rooms should be about 18 x 18 x 18 cm. Good ventilation and drainage are essential. Painting the house white will help to reflect the sun’s heat. The entrance to the nesting compartment is usually 5 to 6 cm in diameter and 2 to 3 cm above the floor. Landing shelves should be very narrow to discourage other birds from using the rooms. Houses should sit atop a pole 4.5 to 6 m high. This should be erected well away from any trees, other standing structures, or overhead wires, and should preferably be close to water. Once the martins have left in the summer, the house should be taken down, thoroughly cleaned out, and stored over the winter.

Martin houses should be erected or opened just after the first sighting of martins in the spring. This will prevent other species of birds—especially the House Sparrow and the European Starling—from occupying the house. One easy way to keep the entrance holes closed until martins appear is to plug them with styrofoam coffee cups attached to strings. When it is time to open the holes, the cups can simply be pulled out. The repeated removal of their nests will also discourage other species from occupying the house. If the other birds looking for nest sites are desirable natives like Eastern Bluebirds or Tree Swallows, consider providing single-room nesting boxes for them elsewhere on the property.

All About Birds, Purple Martin