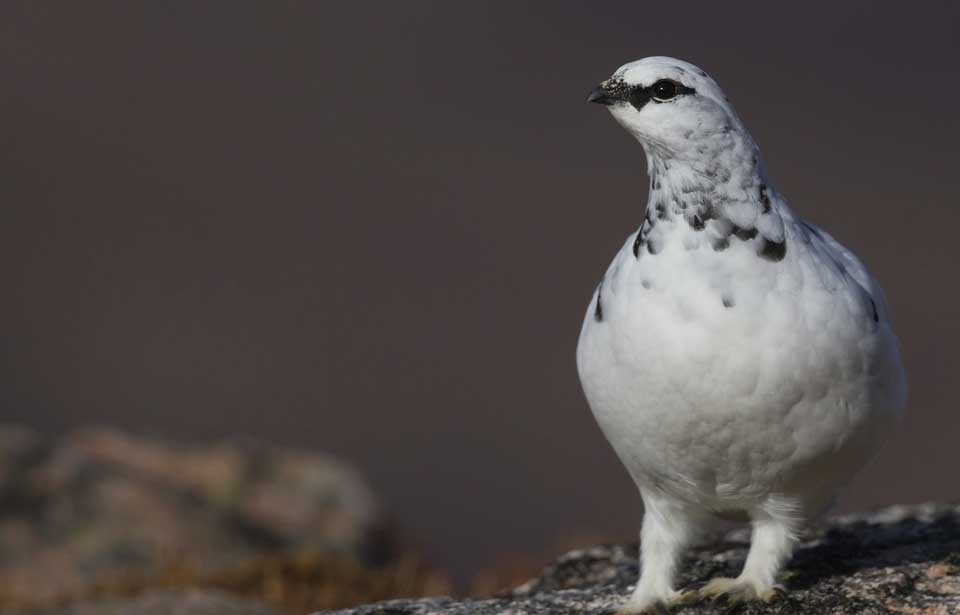 Like other grouse, ptarmigans have chunky bodies, short tails and legs, and short, rounded wings. Willow Ptarmigans weigh from 450 to 800 g, White-tailed Ptarmigans weigh about 350 g, and Rock Ptarmigans are intermediate in size.

All ptarmigans have feathered feet, unique among chickenlike birds, which improve their ability to walk in snow. They also have white wings throughout the year. Inflatable red combs above their eyes, which are especially evident in territorial and courting males, are inconspicuous to barely visible in females.

Ptarmigans have three seasonal plumages per year, instead of the two that are usual for most birds. These plumages keep the birds, particularly the female, well camouflaged at all times. In winter, all ptarmigans of both sexes are basically white. Whereas White-tailed Ptarmigans have permanently white tail feathers, the tails of Willow and Rock Ptarmigans remain black throughout the year. In winter, male—and some female—Rock Ptarmigans sport a black stripe that extends through the eye to the bill (as if they had put on charcoal goggles to prevent snow blindness), distinguishing them from male Willow Ptarmigans.

In ptarmigans, the moult, or shedding of old feathers, starts with the head and progresses towards the tail. As soon as the spring snowmelt begins, females moult into a barred breeding plumage of brown, gold, and black. Female ptarmigans are difficult to tell apart in spring, but the overall tones of the White-tailed Ptarmigan females are cooler in comparison to those of the other two species. Breeding males delay their moult.

By the time the breeding season arrives, Willow Ptarmigan cocks, or males, have distinctive rufous chestnut heads, necks, and chests, whereas the remainder of their bodies is white. When the moult is completed in summer, the entire bird, except for the lower abdomen and wings, is chestnut brown.

Rock Ptarmigan cocks retain their winter plumage during the breeding season and into the summer. When displaying, they look stunning in their pure white-and-black plumage and red combs. Their feathers become dirty from dust bathing once the snow disappears and, in late summer, are replaced by a barred plumage similar to that of the females. By the time hens, or females, have reared their broods, the cocks moult into a more greyish fall plumage. Both male and female Rock Ptarmigans barely complete the fall moult before they begin to turn white once again.

During their first two to three weeks of life, ptarmigan chicks have a downy plumage of intricate yellow, brown, grey, and chestnut patterns. They then assume a brownish juvenile plumage, not unlike that of females, which is retained until fall, when it is replaced by the typical white winter plumage.

Breeding males are easily identified by their distinctive aerial and ground display and by their characteristic gargling (Willow), snoring (Rock), and screaming (White-tailed) calls.

In North America, ptarmigans of one kind or another live in almost every arctic and alpine habitat, as long as vegetation is present. The three species may breed on the same mountain but not in the same habitat.

In summer, Willow Ptarmigans inhabit treeline areas, arctic valleys, and coastal tundra where vegetation is relatively lush and tall. They like moist areas, such as pond edges, streamside thickets, and marshy tundra, which they sometimes share with waterfowl and shorebirds. Recently, Willow Ptarmigans have been extending their range northward into parts of the Arctic formerly inhabited only by Rock Ptarmigans.

Rock Ptarmigans live at higher elevations and latitudes, where their typical habitat is rather dry and supports sparse, very low vegetation. In the southern and western parts of their North American range, they also frequent low-shrub vegetation, more typical of Willow Ptarmigan haunts.

White-tailed Ptarmigans are strictly alpine. They inhabit the highest peaks and share rocky slopes and high meadows with mountain sheep, mountain goats, and hoary marmots. They raise their young in moist pockets among cliffs and snowfields. At the northern end of their range, White-tailed Ptarmigans breed at elevations ranging from 900 to 1 200 m. In the southern Rockies, they rarely summer below 3 500 m.

In late fall, ptarmigans seek more protected areas, moving down slopes or southward into the taller vegetation of dense shrubs and forested areas. Willow Ptarmigans may move well into the treed zone.

The winter daily schedule consists of feeding by day and roosting under shrubs or in snow burrows at night and during extreme weather. The quality and depth of snow are important factors influencing survival. Snow depth determines what food will be available. Along with snow hardness, it also determines whether suitable roosting conditions exist to protect the ptarmigans from cold winds and how effectively such predators as foxes, lynx, wolves, and martens can pursue the birds.

To people of the North, ptarmigans are a source of food as well as companionship through fair and foul weather. The closeness of this relationship shines through in the legends, toys, and art of all arctic peoples.

All ptarmigans have feathered feet, unique among chickenlike birds, which improve their ability to walk in snow. The Rock Ptarmigan and the Willow Ptarmigan are found in all countries ringing the North Pole, whereas the exclusively North American White-tailed Ptarmigan inhabits the Cascade and Rocky mountains of western North America and ranges from Alaska to northern New Mexico.

White-tailed Ptarmigans, and the other two species in the southern portion of their range, have only to go a few hundred metres or, at most, a few kilometres to reach dependable winter feeding areas. But the Rock and Willow ptarmigans of the far North probably migrate long distances. Rock Ptarmigans, particularly those from northern Ellesmere Island, are the champion nomads of the grouse world, and their migrations can exceed 800 km.

Like other grouse, ptarmigans are mostly plant eaters. In summer, they sample the leaves, buds, catkins, flowers, seed capsules, bulblets, and berries of a wide variety of tundra plants. They also consume mosses and supplement their menu with insects and spiders when these are available. They have an uncanny knack of choosing the most nutritious material available, a necessity for meeting their high energy demands.

Chicks need a high-protein diet for rapid growth. After eating the yolk sac from which they hatched, they begin to pick up a variety of objects, especially caterpillar, other invertebrates, flowers, and seeds.

Winter is the critical time, as the choice and quantity of food are reduced to the few plants found above the snow or in windswept places. Ptarmigans eat the seeds, buds, and twigs of low willows, alders, and dwarf birches. To consume the catkins and buds of other trees and shrubs, Willow Ptarmigans have learned to perch, somewhat unsteadily, in thin branches. By contrast, Rock Ptarmigans are adept at scratching in shallow snow to reach buried vegetation such as the ground-hugging purple saxifrage. They also take advantage of feeding craters made by caribou, muskoxen, and arctic hares. White-tailed Ptarmigans supplement their diet with the needles and buds of spruces, pines, and firs. Each species has evolved subtle differences in bill size and shape related to its main winter food.

Ptarmigans are generally considered monogamous, or having only one mate at a time. However, when Rock Ptarmigan populations are exceptionally high, cocks have been observed mating with two, and occasionally three, hens that nested on their territories. This is called polygyny. In such cases, males sometimes steal their neighbours’ mates. The females of a polygynous male compete intensely among themselves for the male’s attention, and a hierarchy develops, with the male’s favourite mate holding the dominant position.

At the beginning of incubation, or keeping the eggs warm until they hatch, male ptarmigans guard their females. However they gradually lose interest, leaving their mates to complete incubation and rear the brood on their own. Male Willow Ptarmigans, the only family-conscious fathers of the grouse group, are an exception. They guard their mates closely throughout incubation and habitually help in rearing the young.

A ptarmigan begins its life in a shallow nest depression sparsely lined with grasses, lichens, leaves, and feathers. Warmed by the featherless abdominal brood patches of the hen, the downy chicks hatch approximately three weeks after the clutch of five to 14 spotted and blotched eggs is completed.

Although all chicks usually hatch within a few hours, hatching may take as long as a day. During this time, the hen keeps the brood warm, but the youngsters emerge from under her breast for short periods. Then, while making low vocalizations, the hen leads the chicks, each weighing about 15 g, from the nest. At first the family hunts for food in the vicinity of the nest, but it then ranges over an increasingly large area and can travel considerable distances in search of suitable food.

If nesting is successful, hens raise only one brood per year. If they lose their eggs while still laying or during early incubation, they may renest. Observers watched one Rock Ptarmigan hen make four successive nesting attempts, each time in a different location within the same male’s territory, but lose all her eggs to a fox.

The chicks grow amazingly quickly. Unsteady when hatched, they can scurry like mice within a few days and fly clumsily when about a week old. By autumn, the young are almost adult size and are able to fend for themselves. They often form small flocks with adults, and species can mix as small flocks join to become larger ones. A fair amount of calling and displaying can take place, but this lacks the intensity and vigour of spring displays.

Ptarmigans as well as snowshoe hares, Ruffed and Spruce Grouse, lemmings, lynx, red and arctic foxes, and Snowy Owls are animals that undergo cyclical population fluctuations. No single explanation applies to all cases, but weather conditions and quality and quantity of food appear to be important factors contributing to the rising and falling in population size at fairly regular intervals.

In North America, ptarmigans live in areas rarely visited by humans, but that is changing rapidly. Consequently, current conservation measures, which are mostly precautionary in nature—such as hunting regulations that protect breeding birds and set daily bag limits—or respond to local problems, may no longer suffice.

Despite the relative remoteness of ptarmigan ranges, poor land-use practices have already degraded or destroyed some of their habitat. Grazing by domestic sheep has played havoc with alpine habitat in much of the White-tailed Ptarmigan’s southern range. Reindeer have severely overgrazed coastal tundra in western Alaska and near the mouth of the Mackenzie River. Tundra fires set by people have increased, particularly near the treeline, temporarily reducing the amount and variety of available food, but also stimulating the growth of palatable shrubs used by ptarmigans in winter. Although oil exploration activities seem to have little negative effect on ptarmigans, not all development is harmless. Any land use that leads to progressive erosion, destruction of vegetation, pollution of soil, water, and air, or melting of permafrost can endanger ptarmigans and other wildlife.

In recent years, several new threats have emerged. So far, ecotourism does not appear to have caused a measurable decline in ptarmigan populations, but it has inadvertently contributed to the destruction of their often fragile habitat. Long-range movement of pollutants in the atmosphere is becoming more serious and is likely to be detrimental to many arctic species, including ptarmigans. And no one knows yet how global warming and ozone depletion will affect wildlife.

Although all three ptarmigan species have been studied by scientists, their levels of tolerance to human-induced changes remain largely unknown, as do many other aspects of their biology.

All About Birds, Rock Ptarmigan

All About Birds, Willow Ptarmigan

All About Birds, White-tailed Ptarmigan