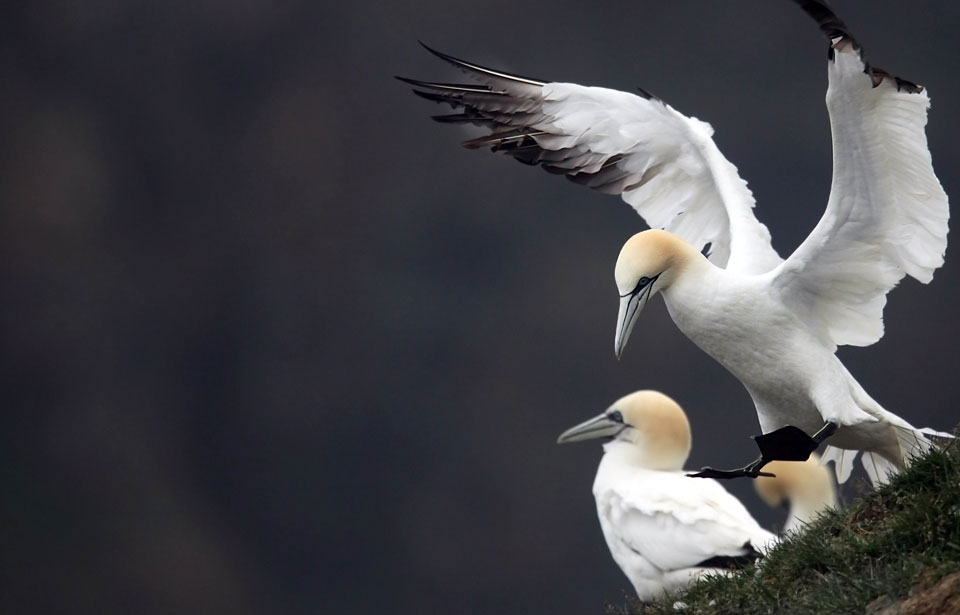 The Northern Gannet is one of three subspecies of Gannet Morus bassanus in the world: the other two occur along the south coast of Africa and in Tasmania and New Zealand.

Adult gannets have dazzling white plumage except for narrow grey spectacles and jet black, tapering wingtips. During the breeding season, the head and neck assume a delicate saffron yellow tinge. The eyes are an icy blue, and the bill is blue to grey-blue.

Young gannets in autumn plumage are brown, with many white flecks. With the passing of each season, they become progressively whiter, reaching the complete adult plumage in their fourth or fifth year.

Gannetries are located on steep cliffs and small offshore islands. At almost all these sites, land predators cannot reach the nesting birds. An exception is Bonaventure Island, which is inhabited by red foxes. If disturbed, gannets will often desert their nest, particularly if they are nesting for the first time.

The offshore islands and steep cliffs that appeal to gannets have sometimes been selected for lighthouses, and several gannetries were probably abandoned in the 19th and early 20th centuries because lighthouses were built on them.

At the end of March, thousands of Northern Gannets leave the southeastern coast of the United States and migrate north to nest on half a dozen islands and capes of the island of Newfoundland and the Gulf of St. Lawrence. The dazzling white birds nest so closely together on cliffside ledges at these major colonies, or gannetries, that the cliffs appear from the water to be covered with snow. Above each colony, the air is filled with a blizzard of circling birds—the mates of those on the nests.

Its short legs and large webbed feet make the gannet a slow and clumsy creature on land. A fast and powerful flyer, it is nevertheless awkward at landing and taking off. Earl Godfrey, in The Birds of Canada, has very picturesquely described the ungainly take-off of this bird:

“The bird wanting to leave for a flight solemnly raises the head and points the bill tip skyward, partly spreads the wings, and depresses the tail. With weird moans it waddles and hops its way toward the cliff edge or a less crowded part of the colony. Each time it passes too close to a neighbour, a furor is created with many a bill thrust and vocal threat received. Using both legs and wings, it rushes ahead and becomes airborne. Once in the air its flight is easy and graceful, alternating flaps and glides.” (p. 52)

The Northern Gannet is well equipped by nature for its spectacular plunges for fish from great heights. Unlike most birds, it has binocular vision—that is, its eyes are positioned such that it can see forward with both. This presumably gives it the ability to estimate how far the fish are from the surface of the water. Its strong, streamlined bill is 100 mm long. It has no nostril holes, and its upper and lower bills fit tightly together so that little if any water is forced into the mouth on impact with the surface. Its streamlined body has a system of air cells between the skin of its neck and shoulders and the muscle beneath. As the gannet prepares to dive, its air cells are inflated to cushion its body when it strikes the water.

A Northern Gannet in flight is supremely graceful. The wings of an adult bird may span almost 2 m and are narrow, tapered toward the ends, and swept back slightly, like those of a gull. Its long strong bill extends forward in flight, tapering smoothly into the small head, which merges with a thick neck that in turn joins the body in a clean, smooth contour. The legs are tucked well up under the smoothly tapering tail. The gannet’s shape appears to offer minimum resistance to air flow.

With its strong powerful flight, a gannet can travel far in almost any weather. Or it may glide for hours, just above the wave-tips, seldom moving its wings. Taking advantage of the updrafts of air caused by the upward deflection of the wind off the windward slope of the wave, it skims the wave-tips, rises on the updraft of a wave, and glides in a shallow dive to the updraft of the following wave. Thus it makes headway against a stiff breeze without flapping its wings. Gliding flight across the wind or downwind is also possible for this aerial mariner. This type of "wave-hopping" demands almost perfect control on the part of the flyer—a type of control impossible for even the best designed gliders. The population of Northern Gannets is not very large as seabird populations go. There are approximately 87 900 breeding Gannets on the Atlantic coast of North America, all of which nest at six colonies in the Gulf of St. Lawrence and along the east coast of Newfoundland. Once their young leave the nest, the gannets return south and disperse along the coast from New England to the Gulf of Mexico.

The map shows the Canadian gannetries. Three of the six are in Newfoundland and Labrador: one on Funk Island (more than 6 000 pairs), one on Cape St. Mary’s (6 500 pairs), and one on Baccalieu Island (675 pairs).

The other three are in the Gulf of St. Lawrence in Quebec: one on Bonaventure Island (more than 24 000 pairs), one on Bird Rocks in the Magdalen Islands—which was probably once the largest gannet colony in the world—(6 600 pairs), and one on Falaise aux Goélands colony in the northeast sector of Anticosti Island (155 pairs).

Few seabirds are more spectacular in their fishing methods than this one. The gannet may fly alone or as part of a group, usually cruising 18 to 30 m above the sea. When a gannet sees a fish in the water below, it dives more or less vertically, with partially folded wings and great speed. Its impact with the water may send spray as high as 3 m, and the momentum of its dive is thought to carry the bird below its prey. Swimming strongly with the aid of its large webbed feet, and possibly at times with its wings, the gannet captures its prey. On reaching the surface, or even before, it swallows the fish and takes off to resume the hunt or to return to the gannetry to feed its nestling. A diving gannet is a signal to others cruising nearby that a shoal of fish may be present, and they fly to investigate. On seeing a large shoal, they attack in great numbers.

Gannets do not always dive so spectacularly for food. When a shoal of fish is close to the surface, a bird may rise only about a metre before plunging again. Or it may occasionally beat its way over the surface with its wings and feet, head underwater to see the fish.

Male Northern Gannets choose a nest site when they are three, four, or five years old. Courtship involves much formal bowing and spreading of wings. Usually the first breeding season is devoted to courtship and building the nest. Pairs may remain together for years. Established pairs add to nests at the breeding colony, which may still be snow-covered when they arrive.

Occupied year after year, a typical nest grows from a low collection of seaweed, sticks, moss, and debris into a substantial heap of feathers, fish skeletons, and droppings accumulated from many generations of nesters. Nests are usually 600 to 900 mm apart and form regular lines due to the hexagonal shape of each territory, an arrangement that allows the birds to pack the maximum number of nests into a given area.

Between late May and mid-June the female gannet lays a single bluish-white egg in the moss-lined hollow at the top of the nest. The parent birds take turns incubating, or warming the egg to hatch it, with their webbed feet. In the first week of July, the first young gannets emerge from their shells. Grey, naked, and helpless, the chick sprawls in the nest, whining like a puppy. It is tended carefully by its parents, and after about two weeks is covered with a protective coat of soft white down.

Plumage begins to appear at about six weeks, and flight feathers are fully grown by September. Only after days of hesitation does the young bird half-fly, half-tumble in its first plunge from the rock ledges to the water below. A fledgling occasionally falls to the rocks and, if uninjured, heads for the ocean. Once in the water, the young gannet may live on body fat for days, until it masters the specialized and difficult art of plunge-diving for food.

From the earliest days of colonization in North America, seabird hunters and provisioners of ships took gannets for food, and fishers used them as bait. The large colony observed by Jacques Cartier on Funk Island was decimated in the 17th century by hunters in search of food. (Sometime between 1857 and 1863 the colony on Funk Island became extinct. It was not reestablished until about 1936, when seven pairs bred on the island.) Between 1830 and 1880, because of the combined effect of overhunting and interference with the birds’ habitat, the total population of breeding gannets in Canada plummeted from 200 000 to approximately 8 000. However, after hunting gannets and gathering their eggs were outlawed, the population at the Canadian gannetries gradually recovered to total 87 900 breeding birds by 1990.

A relatively recent temporary decline in numbers at the Bonaventure Island colony underlines the fact that hunting and habitat disruptions are not the only human activities that potentially threaten gannet populations. A decline between 1969 and 1976 was due to the effects of pesticides. During that period, the concentration of DDT and related residues in gannets from Bonaventure Island was roughly twice as high as in Funk Island gannets. The birds had absorbed DDT through contaminated fish. The high levels of DDT in seabirds in the Gaspé region could be explained by the proximity of forests that were heavily sprayed with DDT in an attempt to control spruce budworm infestations. The effects of DDT on the Bonaventure Island gannet colony included eggshell thinning and reduced hatching success. Since the use of DDT as a pesticide has been banned, eggshell thickness and hatching success rates have returned to normal.

Also, the release of oil as a result of the pumping of bilge waters at sea or shipping accidents has killed a large number of gannets. The serious risks of pollution created by offshore drilling pose yet another threat to the survival of gannets. When birds come into contact with oil, their feathers become matted. The natural oils that give the feathers their water-repellant properties are dissolved, thereby reducing the insulating capacity of their plumage. In addition, birds may swallow the oil while feeding or preening, and this can result in chronic poisoning. Nonetheless, the gannet is less exposed to the adverse effects of oil than seabirds that spend more time on the water.

Fortunately, Northern Gannet populations in Canada are flourishing. However, the protection of seabirds and other aquatic wildlife is only possible if measures are taken to prevent all types of pollution, whether it be oil, fishing gear, plastic debris, or pesticides or other chemicals.

In Canada, it is illegal to harm or hunt gannets. Research is currently under way on the effects of chemical pollution on the reproductive success of gannets. Since 1968, the Canadian Wildlife Service has been studying the effects of DDT and other contaminants on gannets. CWS monitors changes in the Canadian gannet population in order to determine its state of health.

Northern Gannet - A Sentinel Species for the Gulf

All About Birds, Northern Gannet

Fisher, J., and R.M. Lockley. 1954. Sea-birds: an introduction to the natural history of the sea-birds of the North Atlantic. Houghton Mifflin Company, Boston.