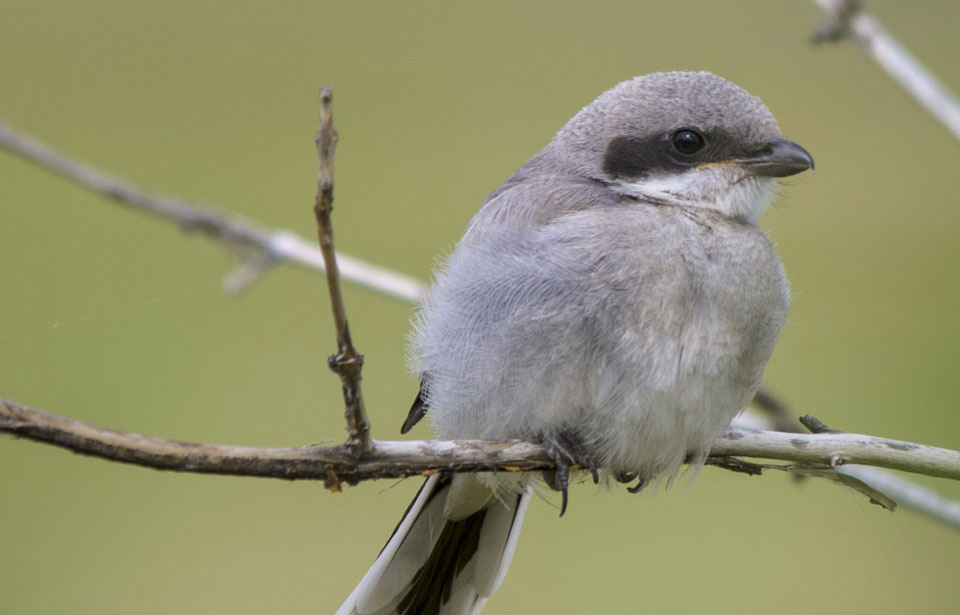 All of the subspecies are quite similar. The back is grey, the wings are black and white, the chest and belly are white, and the tail is black with white strips along the sides. A notable field mark is the “mask,” a black stripe across the eyes and forehead. The birds have a heavy, hooked beak, and a somewhat large head for the size of the body, which likely is the source of their name—“loggerhead” means “blockhead.” Adult Loggerhead Shrikes measure about 21 cm and weigh about 47.5 g.

During the spring courtship period, both male and female Loggerhead Shrikes make a range of noises. Their calls are an unmusical series of notes. Other sounds are a variety of shrieks, uttered when the birds are alarmed, or a repeated tink, like that made by tapping two pieces of metal together.

The Loggerhead Shrike usually is seen perched on utility wires, fence posts, or dead branches protruding from the tops of large trees or shrubs. It flies with a fluttering of wings, followed by a glide, during which the distinctive white patches on its wings and white stripes on the outside edges of its tail are quite visible.

When scouting for prey or hunting, Loggerhead Shrikes usually swoop down from a perch, flutter close to the ground across open areas, and then fly up to land on another perch.

At one time, both subspecies could be seen quite commonly around farms and suburbs, and their presence in an area often was noted because of their habit of impaling their prey on the thorns of small trees or on barbed wire fencing to eat it.

The Loggerhead Shrike kills its vertebrate prey—those with spinal columns—by breaking their necks. Aided by a tomial, or cutting, tooth on the upper beak, the shrike can quickly cut through the spinal cord, partially paralyzing its quarry, making it easier to kill the animal. Then, carrying prey as heavy as its own body in its feet, and smaller prey in its beak, the shrike retires to a spot where it may impale its find on thorns or barbed wire or wedge it into a forked branch in order to eat it. These methods of dealing with its kill are adaptations—they compensate for the fact that the Loggerhead Shrike does not have heavy talons and strong feet to allow it to hold its prey while biting off edible bits. Distribution of the Loggerhead Shrike

In the early 1900s, breeding populations of the two subspecies in Canada extended from British Columbia to the Maritimes. At that time, the Eastern Loggerhead Shrike was reported in Nova Scotia, nested in New Brunswick, and was a common breeding bird in the Montreal area and Quebec’s Eastern Townships, as well as in the agricultural parts of southern Ontario. The Prairie Loggerhead Shrike occupied grasslands and farmed areas throughout the southern parts of the prairie provinces and was also seen in British Columbia’s Okanagan Valley. During the past 100 years, the breeding populations of the two subspecies in Canada have been in a gradual decline.

Today, the Eastern Loggerhead Shrike faces extirpation in Canada—it may soon no longer exist in the wild here. It has disappeared from New Brunswick and Quebec; in Ontario, there are five widely separated locations where a few dozen breeding pairs still can be found; and a small population of about a dozen breeding pairs has been identified in one township in southeastern Manitoba.

The Prairie Loggerhead Shrike is more abundant in prairie Canada, but numbers are in decline in some areas. This subspecies is quickly disappearing from extreme southwestern Manitoba, and it seems to be declining in southeastern Saskatchewan as well. Populations have decreased on the edge of its range in the parklands of Alberta and western Saskatchewan, but numbers may be more stable in the grasslands of these provinces.

Most Loggerhead Shrikes in the southern part of the bird’s range live there year-round. Loggerhead Shrikes that breed in Canada migrate to southern locations in the United States for the winter. Prairie Loggerheads are believed to winter in the southwestern United States and possibly in Mexico. Scientists have collected some information that suggests that Eastern Loggerheads from eastern Canada may winter in Florida, but they must do more work to confirm this possibility.

In the spring, Loggerhead Shrikes migrate in March and April; in the fall, they migrate from September to November. They apparently travel individually and mainly during the night.

If a shrike is observed between the first of May and the first of September in southern Canada, almost certainly, it is a Loggerhead, because Northern Shrikes, which they resemble, breed far to the north, in the broad transition zone between the boreal forest and the arctic tundra. Shrikes seen from early October until the end of April in southern Canada are probably Northern Shrikes.

In the breeding season, Loggerhead Shrikes mainly eat insects, with grasshoppers and beetles being the prominent items. When insects are harder to find, the shrikes consume mice, small birds, small snakes, lizards, or frogs.

Loggerhead Shrikes return to Canada in April and early May to breed. They begin to breed when they are a year old. While they are mainly monogamous, they will mate with other shrikes, and occasionally females will desert males after the young of the first brood have left the nest, raising a second brood nearby with another male. Highly territorial, the pairs establish breeding areas where all activities—foraging, mating, and raising young—take place. Instead of fighting over territorial boundaries once they have been set, Loggerhead Shrikes usually threaten neighbours through the sounds they make or through a bowing behaviour called a “flutter display.”

For their breeding areas, Loggerhead Shrikes prefer grassy pastures that are well-grazed or mowed, but not bare, where they can spot prey easily in the sparse cover; shrubs or small trees, preferably thorny ones like hawthorn or thorny buffaloberry, for nesting and anchoring prey; and high perches in the form of dead branches, or utility wires, from which they can survey their territory and hunt.

There has been much debate about whether Loggerhead Shrikes return to the same nest sites year after year. Some nest sites appear particularly desirable—they are occupied repeatedly. In other cases, scientists have found that birds change sites from one year to the next.

Males and females help find the nest site, and they both gather nest material. The female usually builds the nest alone, fashioning a well-made structure 15 to 20 cm in diameter, thickly woven of dead plant material so that it possesses good insulating qualities against the cold rain and unseasonable snowstorms of early spring. The nest is usually in dense cover 1 to 2.5 m above the ground but is occasionally placed several metres high. It is usually built in six to 11 days.

Egg-laying begins in late April in the east and mid- to late May in the west. The usual number of eggs is five to seven. The female begins to incubate, or warm, the eggs when she has almost finished laying. During this time, she is fed by the male. The young hatch about 16 days after incubation begins.

When they hatch, the chicks are altricial—naked, blind, and helpless. The parents work hard to keep them warm and fed. During one hour watching a nest with eight nestlings, scientists saw one or the other adult bring a grasshopper to the nest every four minutes. Within two weeks, the young, who are about 3.2 g when they hatch, are almost as heavy as their 47-g parents.

The young leave the nest when they are about 17 to 20 days old. They move into nearby branches, but return to the nest to be brooded, or warmed by their mother, at night. Young birds are fed by the adults for two to three weeks after they have fledged, or left the nest, during which time they learn to hunt and become increasingly self-sufficient. Soon after, the family group breaks up, and by early September the adults and young begin their migration to the wintering grounds. During migration, and on the wintering grounds, these two subspecies may mingle with other resident, non-migratory subspecies of Loggerhead Shrikes.

The Loggerhead Shrike is a useful and interesting bird. It consumes large numbers of grasshoppers, field mice, and meadow voles, all major pests of agricultural crops.

It is not certain why the number of Loggerhead Shrikes in Canada has been in such a continued decline, since many young hatch and appear to be successfully raised each year. However, it is possible that a large number of birds are lost after they leave the nest; scientists have not yet determined how many or why birds may die at this time.

The Loggerhead Shrike has a number of predators, among them Black-billed Magpies, Common Crows, bull snakes, feral cats, and prairie long-tailed weasels. However, it is believed that long-term changes in land use by humans on breeding and wintering ranges probably have contributed most to the decline. In western Canada, large areas that were formerly native grassland or pasture now support crops or have reverted to forest or scrubland, in part because wild fires that once periodically swept the grasslands, burning young aspens and keeping them from supplanting the wild grasses, now are quickly extinguished. In eastern Canada, land-use practices have changed, family farming has declined, and suburban sprawl is on the rise. Former grasslands are reverting to shrublands, and forests and essential habitat are becoming fragmented and smaller. Remaining habitat often is along roadsides, where shrikes frequently are victims of collisions with vehicles.

Recovery plans are in place for the Eastern and Prairie Loggerhead Shrike. These plans are blueprints for recovery actions. Research on Loggerhead Shrike populations in Canada increases each year. Activities include population monitoring, banding (placing a numbered aluminum band around the leg of a bird), DNA studies, and the establishment of a captive population to produce offspring for future releases when the causes of the decline are better understood. In addition, Loggerhead Shrike Recovery Action Groups are being established to coordinate landowner stewardship efforts; in eastern Canada, in particular, almost every known breeding pair is found on private property.

A National Accord for the Recovery of Species at Risk, signed by the federal, provincial, and territorial governments, commits the parties to working together to ensure that no endangered or threatened species in Canada will become extirpated or extinct. The signatories to the Accord must ensure that they have legislation in place to allow them to fulfil their commitment. If efforts to help the Loggerhead Shrike population to increase in Canada are to succeed, additional support from governments, groups, and individuals is essential—to protect existing and to establish new habitat.

All About Birds, Loggerhead Shrike

Yosef, R. 1996. Loggerhead Shrike (Lanius ludovicianus). In The Birds of North America, no. 231. A. Poole and F. Gill, editors. The Academy of Natural Sciences, Philadelphia, and The American Ornithologists’ Union, Washington, D.C.