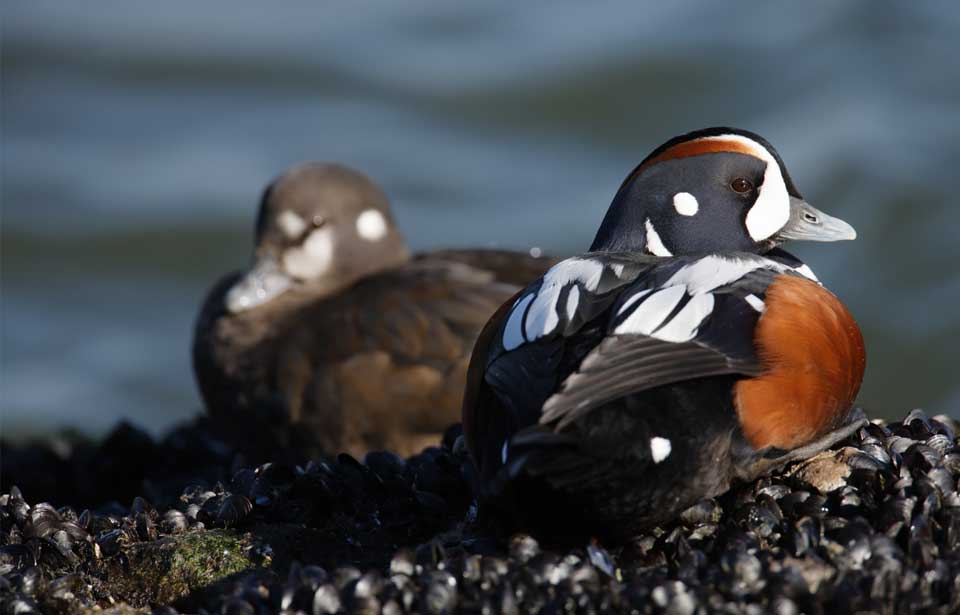 The Harlequin Duck Histrionicus histrionicus is a small, relatively uncommon sea duck. It gets its English name from characters in Italian comedy that wear masks and have oddly painted costumes. The colourful male, or drake, is one of the most attractive of sea ducks. At an average weight of less than 700 g for males and less than 600 g for females, the species is roughly half the size of an average Mallard.

From a distance, Harlequin Ducks look black or dark grey and can easily be confused with more common sea ducks, such as scoters. At close range, however, the adult male is striking and brightly coloured. It is characterized by slate blue plumage, chestnut flanks, and streaks of white on its head and body. The most distinctive markings on the head are a crescent-shaped white patch at the base of the short bill and a round white ear patch. The belly is slate grey.

Females and young birds lack the lustre of the drakes. The female has plain, brownish-grey colouring that is darkest on its head, a white patch extending below and in front of each eye, and a prominent white ear patch. The belly is white with brown speckles. Young birds strongly resemble the adult females. They have the white spot between the bill and eyes, as well as the prominent round ear patch. However, the feathers on the upper body of the young are darker than those of adult females, and the belly is more finely barred, giving an overall greyer appearance. The young males achieve some adult features during their first winter, but do not grow full adult plumage until two or three years of age.

Seen from afar, Harlequin Ducks can be distinguished from other sea ducks by several features. They have slighter bodies and shorter bills than scoters, and they raise and lower their heads and nod while swimming. The birds are also normally found in smaller flocks and closer to shore than other sea ducks. Female and immature birds do not have the white wing patches found on Buffleheads and White-winged Scoters.

Harlequin Ducks are also known as "sea mice" and "squeakers" because of their mouse-like call.

Harlequin Ducks have an unusual life history. During most of the year, these birds are found in coastal marine environments. However, in spring they leave the salt water to ascend fast-flowing rivers and streams to breed.

During winter, Harlequin Ducks congregate at traditional sites to feed in the swirling waters of shallow and rocky coastal areas. In northern wintering areas, they seek rocky shores and ledges near turbulent water where ice buildup is minimal.

Like many other waterfowl, male Harlequin Ducks leave the breeding areas once the female begins to incubate, or warm the eggs, usually by mid-June to early July. After leaving their mates, males migrate to specific sites to undergo their annual moult, or shedding of old feathers. Females normally join males at these sites and moult one to two months later.

Harlequin Ducks are also called "rock ducks" due to their habit of hauling out on rocks. Other local names include "lords and ladies," "ladybirds," "white-eyed divers," "painted ducks," and "totem-pole ducks." In spring, the birds begin their migration to inland nesting sites that are usually along smaller river tributaries. Migration to the traditional wintering areas, which may encompass the moulting sites, takes place from October to November.

The eastern population breeds in Labrador, northern Quebec, the Gaspé Peninsula, the island of Newfoundland, and northern New Brunswick. Labrador and northern Quebec are the most important nesting areas for the eastern population of Harlequin Ducks due to the abundance of clear turbulent streams and rivers. Eastern Harlequins winter on the island of Newfoundland, in Nova Scotia and New Brunswick, and south as far as Virginia. However, the primary wintering grounds are in coastal Maine.

Harlequin Ducks have different feeding habits depending on the season. During spring and summer, when Harlequins occupy freshwater habitats, the birds dive to the bottom and walk against the current, prying in the stream bed in search of larvae, or the immature stage, of flying insects such as blackflies, caddis flies, stone flies, and midges. The absence of sufficient food is thought to limit distribution in more northerly areas.

Wintering habitat consists of turbulent seas and the rocky parts of coastal areas. The birds locate their food by diving in shallow waters over wave-pounded rocks and ledges to find and pry prey from crevices. The most common food items include small crabs, amphipods, gastropods, limpets, chitons, blue mussels, and fish eggs.

The Harlequin Duck has high food energy requirements, probably because of its relatively small body mass and high metabolic demands, especially in colder parts of its range. Because a small bird can store fewer reserves than a large bird, Harlequins are less suited to survive extremely cold and stormy weather. They must feed continually to maintain their metabolism.

Harlequin Ducks are usually two to three years of age when they first breed. Not much is known of their behaviour during courtship. Breeding normally begins in late May or early June. Pairs maintain their bonds by indulging in "display activities" that consist of head nodding by both sexes, which may include shaking the bill from side to side and dipping the bill between nods. Paired individuals often scurry toward intruders over the water surface.

Unlike other northern hemisphere ducks, Harlequin Ducks normally locate their nests beside fast-flowing streams. Observations of nest sites suggest that females may use the same site in consecutive years. The nest, lined with down, may be built on the ground under clumps of shrubs or under logs, in tree cavities, under bank overhangs, or even on bedrock ledges. In early summer, the female, or hen, lays three to eight cream to pale buff eggs at intervals of two to four days.

The hen incubates the eggs for 28 or 29 days until they hatch. During this time, she leaves the nest infrequently to feed, wash, and rest. Incubating birds may not leave the nest until closely approached. Nests are extremely difficult to find.

The female leads her ducklings to secluded streams within 24 hours of hatching. Here they learn to find aquatic insects and larvae in the cool and clear waters. The young are able to fly when they are about 40 to 50 days old.

Harlequin populations have a low reproductive rate and therefore might take longer to rebuild after a decline than do populations of other waterfowl. Factors such as the later age at first breeding, small average clutch size (set of eggs to be hatched at one time), and the high proportion of nonbreeding birds in some years may contribute to the low productivity of Harlequin Ducks. In some years fewer than half the females are thought to nest, possibly because insects are less abundant.

The Harlequin Duck has been protected in Canada as a migratory game bird since the Migratory Birds Convention Act became law in 1917, although a complete ban on hunting the species in eastern Canada only came into effect in 1990. Also in 1990 the eastern population was listed as "endangered" by the Committee on the Status of Endangered Wildlife in Canada (COSEWIC).

There are many possible reasons for this endangerment. On their breeding grounds in Labrador and Quebec, Harlequin Ducks find fewer suitable breeding sites, as some rapids are stilled behind hydro dams. The once remote areas used by breeding birds are increasingly the sites of hydro developments, mines, and access roads.

On wintering areas, threats include oil spills and other human disturbance. The threat posed by disturbances to habitat is intensified by the strong attachment of Harlequin Ducks to specific wintering sites. Because a large proportion of the eastern North American population concentrates along the Maine coast during the winter, potential oil spills in the Gulf of Maine are a major concern. One spill in this area could have a significant impact on the total population. Similarly, other human disturbances in wintering areas could affect survival. Birds cannot feed effectively if they are avoiding humans and may use much of their energy reserves necessary for survival. During the moulting period, the birds are particularly susceptible to disturbance and oil pollution because of their inability to fly. Human activity in both wintering and breeding areas may decrease the food supply for Harlequin Ducks.

The Harlequin’s relative tameness and tendency to feed close to shore in some locations may make the bird vulnerable to hunting. Moreover, female and young Harlequin Ducks are difficult to identify. The incidental killing of Harlequins during the hunting of other waterfowl is an especially serious threat.

There may be other reasons why the eastern population is declining. Pollution and changes to water quality may be contributing factors. Acid precipitation and atmospheric fallout of heavy metals in breeding areas may be harming the aquatic insects that nourish the ducks during the breeding season.

The Eastern North American Harlequin Duck Recovery Team began recovery efforts shortly after the eastern population was listed as "endangered." In 1995, it completed a plan that outlines necessary actions such as enforcing hunting bans more strictly, protecting and enhancing habitat, developing environmentally sustainable plans for major disruptions (such as hydro dams and mines) on the Harlequin’s habitat, and promoting public support for conservation activities.

It is now illegal to hunt Harlequin Ducks in the Atlantic Provinces, Ontario, Quebec, and in the eastern United States, where most birds winter. Hunting closures have not been implemented in western Canada, where hunting of the species is thought to be rare. However, recent information suggests that the western population could be declining. A review of the status of the western population and of the current monitoring programs is underway.

The public has an opportunity to contribute to recovery efforts by supporting conservation measures. Hunters, too, can play a part. Handouts describing how to identify Harlequin Ducks are available, and hunters are urged to familiarize themselves with the appearance of all ducks they might encounter and to identify targets accurately before shooting.

Preventing oil and chemical spills near areas frequented by Harlequin Ducks is critical to their recovery. Any groups or individuals using the sea must take measures to ensure that contaminant spills, discharge, and littering, regardless of the amount, do not occur at sea or along the shoreline.

All About Birds, Harlequin Duck