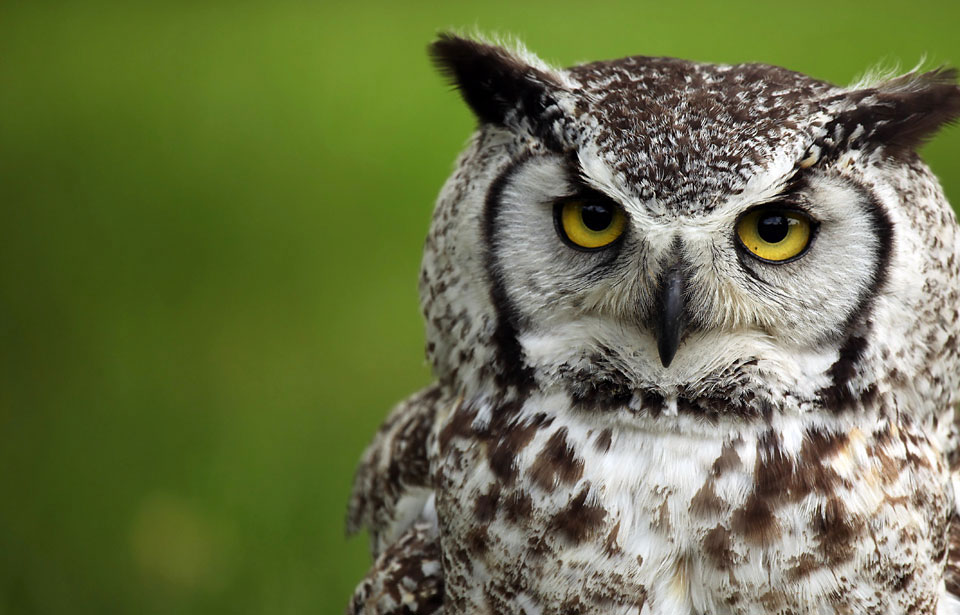 The Great Horned Owl Bubo virginianus is one of Canada’s commonest large birds of prey. The most notable physical attributes are its large size and prominent ear tufts or "horns." A predator that hunts at night, this owl has enormous yellow eyes set in a broad face, a curved beak and claws, and long fluffy feathers. Its coloration tends mainly toward brown or grey-brown, with conspicuous barring. Very dark races occur in British Columbia and Labrador, whereas extreme whiteness is seen in Great Horned Owls from the Northwest Territories and northern sections of the Prairie provinces. As is the general case with hawks and owls, the female Great Horned Owl is considerably larger than the male, averaging about 2 kg to the male’s 1 to 1.5 kg, with a wingspan of about 1.2 m. The only larger owl is the Snowy Owl, a winter migrant to southern Canada, whose maximum weight approaches 3 kg.

There are few rural residents, hunters, or vacationing city dwellers who have not either observed this magnificent bird in the woods or listened on a still evening to its legendary hooting—a soft yet vibrant whoo-hoo-ho-o-o.

Adult Great Horned Owls are formidable predators and have few natural enemies, though some may be killed or seriously injured when attacking large-size prey. It is, for instance, common to find these owls riddled with porcupine quills or reeking of skunk scent. There are accounts of Great Horned Owls attacking snakes and coming off second best. Crows and magpies frequently harass or "mob" roosting owls during the daytime, but this can be scarcely more than a minor annoyance.

Young Great Horned Owls normally do not move far from the area in which they were born: over 90 percent of nestlings that have been banded and later recovered moved less than 80 km.

The Great Horned Owl is found in virtually all of the forested and semi-forested regions of North, Central, and South America, except on the islands of the Caribbean. A close relative, the Eagle Owl, is native to Europe, North Africa, and central Asia.

With no need to make the seasonal migrations that carry other birds from the Arctic Ocean to the Straits of Magellan and back again, Great Horned Owls are likely to be year-round residents of limited hunting ranges of about 8 to 10 km2, throughout their vast region. Such adaptation by a species is truly remarkable and has few parallels in ornithology.

Because they are both large and powerful, Great Horned Owls are capable of handling a wide variety of prey, ranging in size from shrews and songbirds to skunks and geese. As a general rule, however, the Great Horned Owl mainly depends upon medium-size mammals and birds, at least in Canada and the United States where its food habits are well documented. Rabbits and hares are a staple part of the diet in many regions, and grouse and ducks are also important prey. When mice or voles are abundant, as they are every three or four years, owls consume large numbers of them.

The Great Horned Owl hunts mostly between dusk and dawn, and its night vision and hearing are acute. Like other owls, it can approach its prey in total silence thanks to specializations of the flight feathers. As well as being a silent hunter, this owl is swift, and its talons are effective weapons.

It swallows small prey whole, but dismembers larger prey before eating them. Fur, feathers, teeth, and bones that are indigestible are compacted in the owl’s stomach and later regurgitated, or brought up, as "pellets." One or more of these may be expelled daily, depending upon the volume and type of food eaten. Scientists obtain information on the food habits of owls by identifying the remains of prey animals in such pellets.

Great Horned Owls make little if any effort to construct nests or even to repair suitable existing ones. Rather, they customarily take possession of the previous year’s nest of some other raptor, such as a Red-tailed Hawk, or that of a crow or magpie. The same nest is seldom used by owls for more than one year, because trampling by the young usually reduces any nest to a disintegrating mass of sticks. Hollow trees are occasionally selected as nest sites. In mountainous or rough terrain, especially where trees are sparse, Great Horned Owls will nest on ledges and high points such as headlands.

Breeding densities commonly average one pair per 7.5 to 10 km2, although one to three pairs per 2.5 km2 have been reported. Active nests tend to be rather evenly spaced within suitable habitats, owing to the species’ strongly territorial behaviour throughout the year. It seems likely that pairs mate for life, share in the defense of a territory against other Great Horned Owls, and occupy essentially the same territory for several years. Most Great Horned Owls first breed at two years of age, although there is evidence that year-old birds occasionally attempt to nest when food is especially abundant.

Bird banders often witness the aggressiveness of these owls in defending their nests. Indeed, many have had clothing torn or suffered severe lacerations during repeated attacks. So risky is it to work with these birds under such circumstances that biologists wear heavy jackets and industrial hard hats for protection.

Great Horned Owls are very early nesters, even in northern latitudes, with egg laying and incubation underway well before the snow disappears. Laying begins approximately one month before hatching. In central Alberta (latitude 54°), average hatching dates range from mid-April to early May. Nesting occurs earliest during years of peak snowshoe hare populations, suggesting that it is the adequacy of the owls’ food supply that determines how early or late the birds will nest in any year.

The number of eggs per nest ranges from one to five, and the size of the average clutch, or set of eggs, differs from place to place and from year to year. Differences in clutch sizes between years seem tied to major changes in availability of food. When large numbers of meadow voles and snowshoe hares provide abundant food for the owl, the size of the clutch increases.

The young owls are almost fully feathered and capable of short flights around eight weeks of age. However, they remain largely dependent upon their parents for food during most of the summer and likely do not disperse from the territories where they hatched until fall. The period between fledging, or first flight, and dispersal is a critical time for all young birds of prey, because this is when they must develop the hunting skills that will make them self-supporting.

Great Horned Owl nestlings are sometimes taken by Red-tailed Hawks and other predators. Young chicks often fall from nests; others are killed and eaten by larger nestlings. Deaths from severe weather and starvation also occur. About 50 percent of the young that leave the nest die within their first year from various causes.

Although various infectious diseases and parasites have been found in the Great Horned Owl, no one really knows how many die of them.

Adult Great Horned Owls face the possibility of death due to various human activities. Some owls fly into power lines or are struck on highways. Others are shot by irate farmers or thoughtless hunters. Fortunately, laws that protect Great Horned Owls from needless persecution have been passed in each province. Owls that die of natural causes can reach a great age.

The Great Horned Owl remains so widely distributed and remarkably tolerant of major habitat disturbance by people that its future seems secure. Its ability to exploit a great diversity of prey and its largely nocturnal activity are undoubted advantages. Together with other wild creatures, however, the Great Horned Owl faces the risk that some new pesticide, land use, or pollutant will produce environmental changes that ultimately lead to a decline in its population. If that happened, it would be unfortunate. The species is beautiful and an important part of natural ecosystems. We must never become complacent about the effect of human activity on the safety of any wildlife species, including this formidable predator.

All About Birds, Great Horned Owl