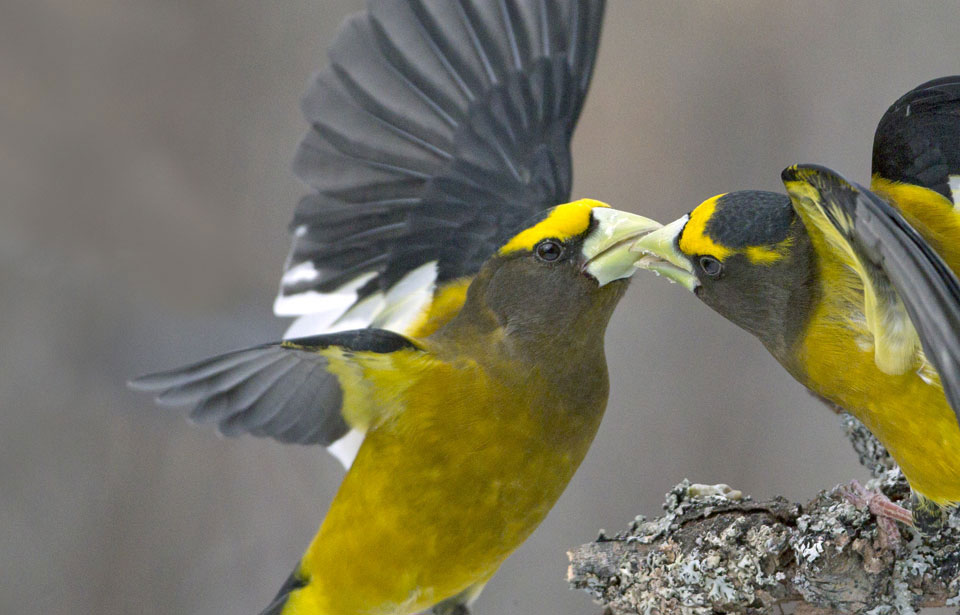 The Evening Grosbeak Coccothraustes vespertinus is a plump, sturdy finch. Its body is about the size of a robin’s, but its neck and its slightly forked tail are considerably shorter. Its prominent thick cone-shaped bill is truly tremendous for a bird of its size. The plumage of the adult male is spectacular, with golden yellow body feathers and a conspicuous gold band across the forehead. The underparts are yellow, and the crown and neck feathers resemble glossy, rich brown velvet. Tail feathers are jet black, as are the wing feathers except for a snow-white shoulder patch. Sub-adult males may be identified by dark areas on the shoulder patches.

Adult females are comparatively subdued in appearance. Their bodies are smoky silver-grey with areas of yellow on the sides, nape, and rump. That part of the wing lining nearest the body is bright yellow. The black tail and wing feathers have distinct white patches, and the underparts are lighter grey with undertail coverts and chin usually buffy and silvery white. By the time they are able to fly the plumage of young female and male Evening Grosbeaks resembles that of their parents sufficiently for sexual identification.

The Evening Grosbeak’s bill is bone coloured during winter, but it undergoes a dramatic change in pigmentation in early spring. Its new colour matches precisely the green of fresh deciduous buds and leaves and also the new needles that will tip the spruce boughs around the site where the bird’s nest will be built a few weeks hence. The Evening Grosbeak conceals its body in the trees and in order to see lifts only its head and bill, which looks like a young green spruce or balsam cone. This is a fine example of protection through appropriate coloration.

The Evening Grosbeak’s flight is undulating. Its wing-beat is rapid with white wing patches flashing conspicuously, and the birds often call in flights.

These birds are noisy and possess a wide repertoire of calls and cries. Their only song has been described as "a series of abrupt warbles" and even this is seldom heard. The most typical call is a monosyllabic chirp that sounds very much like the chirp of the common House Sparrow, amplified. It is employed by each bird to proclaim its place in the flying flock. A lone individual or a member of a perching flock utters this same cry, apparently to advertise its presence to all within hearing range.

The Evening Grosbeak uses a wide variety of sounds to register fear, surprise, anger, pain, uncertainty, curiosity, and alarm. Most of these sounds can be heard by observing a flock closely for a few minutes at a crowded feeding tray.

In the early 19th century, English-speaking settlers in the foothills of the Rocky Mountains came across a beautiful big-beaked bird that appeared mysteriously from somewhere in the distant west. They named it Evening Grosbeak in the mistaken belief that it came out of the woods to sing only after sundown. French-speakers named this bird more appropriately le gros-bec errant, the wandering grosbeak.

The Evening Grosbeak’s preferred habitat is thick coniferous forest, but it has successfully adapted to mixed deciduous habitats.

It is most interesting to watch a grosbeak select a plump sunflower seed, dexterously roll it over and over in the bill and reverse it end for end until the seed lies along the bill’s sharp edge with its peaked end pointing into the mouth. The bill then closes and shears the dry husk lengthwise. A few more adept movements spill the unpalatable husk out of the mouth and the tasty meat is swallowed.

Although four other members of the grosbeak family are found in Europe and Asia, the Evening Grosbeak is found only in North America. Its original home was the foothills of the Canadian Rockies, but its range has now spread as far east as Newfoundland and Labrador.

Evening Grosbeaks were unknown to Europeans until 1823. However, after their discovery these birds were found at points farther and farther eastward, especially in winter, until they reached the vicinity of Toronto in 1854. They seemed to appear at more and more eastern sites in winter, only to disappear again in the springtime. But the pattern was very inconsistent.

During the winter of 1889–90, great flocks moved into New England. Then few or no birds appeared in winter until 20 years later when another heavy eastward flight occurred. At intervals since then, multitudes of this wandering species have appeared in the east and southeast. By the winter of 1960–61, Evening Grosbeaks were found as far south in the United States as Alabama and Georgia and as far east in Canada as Newfoundland and Labrador. The wanderings of western varieties of grosbeaks take them throughout much of the mountain country from western Canada to northern Mexico. The extent of the annual invasions varies from year to year, and the size of wintering populations in the east appeared to decline in the 1980s.

Biologists have traced the wanderings of some of these birds by attaching a numbered aluminum band like a bracelet around one of their legs. Evening Grosbeaks banded in Wisconsin and North Carolina have been recovered in New Brunswick and Quebec. Similarly, Evening Grosbeaks banded in New Brunswick and Quebec have been recovered in North Carolina and Wisconsin. Banding records reveal a flight tendency from west to east and south during the autumn and early winter with a reverse flight during the early spring, but these migratory movements are so variable they seem almost whimsical. They appear to be dictated chiefly by the availability of natural food and should be called wanderings in search of food rather than true migratory flights. The spreading popularity of winter feeding stations has probably further complicated the normally erratic movements of this bird.

Recent studies of heavy spring concentrations of Evening Grosbeaks in Quebec and in New Brunswick have disclosed a close predator–prey relationship between this bird and a serious pulpwood forest pest, the spruce budworm. The birds concentrated in those forest areas suffering the worst incursions of the budworm. They did not return to areas where aerial spraying had eradicated the budworm, but did return to sprayed areas where the budworm still persisted. Gizzards, or the second stage of the stomach, of the adult grosbeaks in these infested regions contained large numbers of the larvae and pupae, or immature and inactive stages, of the budworm. It is thought that the parent birds fed further quantities of these larvae and pupae to their nestlings. The decline of grosbeak winter invasions in the 1980s may be tied to the end of a huge infestation of budworm in the eastern provinces.

Evening Grosbeaks primarily eat seeds from the cones of spruce, balsam fir, and pine but also enjoy seeds and fruits of many deciduous trees and shrubs. They prefer the samaras, or winged seeds, of the Manitoba maple, or box elder. But almost no available seeds are scorned, including weed seeds. Flocks of these birds eat from winterberry, or black alder, as well as hawthorn bushes, ash, and trees that still hold frozen apples in winter. The birds eat very little of the flesh of fruits. After pecking the seed away from the pulp, they split its tough husk with their heavy bill. Usually they swallow only the cotyledons, or inner part of the seed.

In the pulpwood forests of New Brunswick and Quebec where there were infestations of budworm, adult grosbeaks were found to have fed on large numbers of the larvae and pupae, or immature and inactive stages, of this forest pest. It is thought that the parent birds also fed these larvae and pupae to their nestlings.

Evening Grosbeaks are attractive and popular visitors to feeding stations and gardens where they can provide considerable entertainment for birdwatchers. Their favourite attraction is sunflower seed, and one astonished observer recorded a single bird eating 96 seeds in five minutes. As large numbers often visit feeders together, grosbeaks can be hard on the pocketbook. Sunflower seeds may be thrown on the ground or on snow, but it is better to build a raised platform. A lath or narrow strip of cardboard tacked along the edges of a wide board will help to prevent seeds from blowing off.

Despite wide popular interest in the Evening Grosbeak, very few successful studies of its nesting activities have been reported. Some nests have been found, usually 6 to 12 m high, in spruces or deciduous trees. Loosely constructed of small twigs, and lined with grass, fine rootlets, or moss, the nest usually contains three or four greenish eggs lightly splotched with brown or olive.

The Evening Grosbeak’s chief nesting region still seems to be in western Canada. However, this species has spread so widely that it is now almost commonplace in early summer to see adults feeding their young in almost every part of the southern boreal forest.

Although these birds do feed on the buds and young leaves of many deciduous trees, no resulting harm to these trees has been proved. The fruits the birds destroy as they search for seeds are mostly wild winter varieties of little economic importance. Certainly no farmer will begrudge them the weed seeds they devour. A grosbeak getting all its daily energy from budworm larvae would eat 1 000 a day. These birds crowd into budworm infested areas to breed and raise young, then move elsewhere when the infestation declines. Because of its appetite for this destructive pest, the Evening Grosbeak is one of our most beneficial birds.

All About Birds, Evening Grosbeak