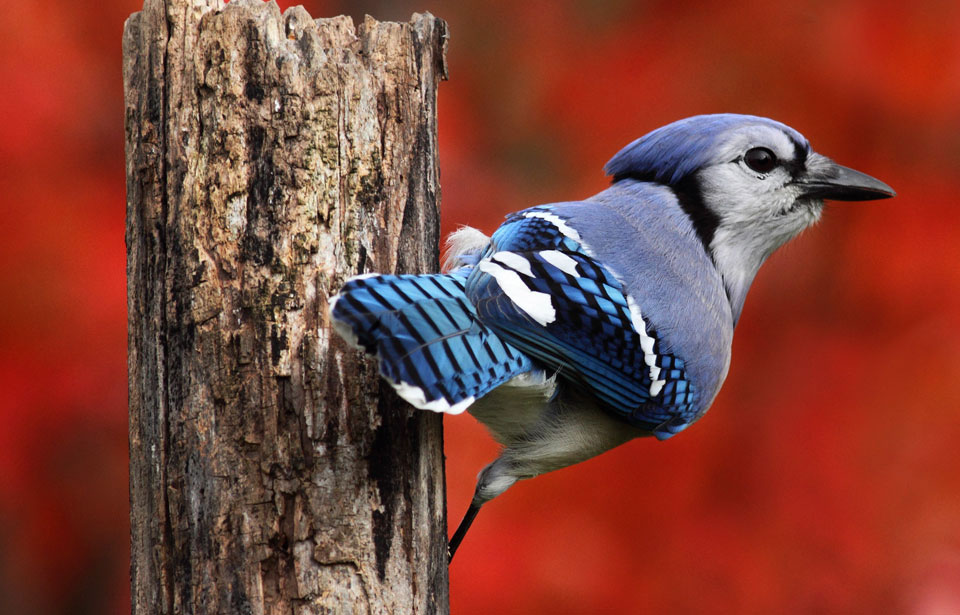 The Blue Jay Cyanocitta cristata is a little larger than an American Robin, about 30 cm in length from the tip of its bill to the tip of its tail. A white-faced bird with a blue crest, back, wings, and tail, it is strongly marked with black and white. Male and female Blue Jays are very similar in appearance. The crest, an elongated crown of feathers found in many jays, is raised or lowered according to the bird’s mood. In moments of high excitement and aggression the crest may be fully erected, forming a prominent peak. When the Blue Jay is greatly surprised or excited, the crest points forward. If the bird is frightened, the crest bristles out like a bottle brush. The Blue Jay’s crest position, when erected, is emphasized by a black band that crosses over the back of the head, a continuation of the broad band or necklace across the chest. However, when the bird is feeding among other jays, when it is ready to flee, or when it is quietly resting, the crest is laid flat on top of the head, giving the bird a quite different and somewhat untidy appearance.

The Blue Jay’s scientific name is derived from Greek and Latin words and means, in reverse order, "crested, blue chattering bird," an apt designation. The Blue Jay belongs to the crow family, or Corvidae, a group of 100 related species including ravens, rooks, jackdaws, crows, magpies, and jays. Some of these species are the largest members of the order Passeriformes, or perching songbirds. The family, which appears around the world, is best represented in the northern hemisphere. These birds are of ancient lineage; fossil remains of corvids have been identified from Miocene deposits 25 million years old.

The Blue Jay’s call is a familiar woodland sound in eastern North America. It issues loud cries to warn other birds and mammals of an approaching predator, and often, with no apparent cause. The 19th-century writer Henry David Thoreau described the Blue Jay’s most characteristic sound as an "unrelenting steel-cold scream,” which has been interpreted variously as sounding like "thief," "jay," and "peer." Blue Jays in fact have a wide variety of other calls, particularly a mellow whistle, kloo-loo-loo, quite musical in form, and also a softly delivered song, a continuous sweet warbling heard during courtship.

The Blue Jay can be recognized from a distance by its apparently effortless flight. It flies with the body and tail held level, with slow, easily discernible wing strokes, which nevertheless carry it along at a good speed.

The Blue Jay occupies a variety of habitats within its large range, from the pine woods of Florida to the spruce fir forests of northern Ontario. It is less abundant in the heavier forests, preferring mixed wood and deciduous forest areas, especially where there are beech, hazel, and oak trees. Most corvids are non-migratory, but some wander about, often in small bands, after the breeding season.

The Blue Jay early adapted to settlement conditions. Throughout its range it is generally more common in settled regions, provided there are a few trees, than in the wild. In woodland retreats it is usually more wary than we have come to expect in towns and cities, where it is almost tame. The jay that appears at a backyard feeding station year after year may be the same individual, for several banded jays have lived from 10 to 15 years. Such birds may be tamer than most of their kind.

The Blue Jay’s vivid cobalt or azure-blue tail and wing feathers make an exotic contrast against brown leaves or green grass. However, these feathers are not truly blue. Blue pigment is unknown in birds. The Blue Jay’s feather colour results from refraction, or distortion, of light by a peculiar inner structure of the feather substance. If the feather is crushed, the blue colour disappears. Shed feathers may often be seen in late summer, since adults go through a complete change of plumage between June and September.

During this moulting, or feather-shedding, period Blue Jays may be seen anting, a term referring to a bird using ants or materials that the ants expel from their bodies for preening, or tidying their feathers. Excited anting birds often trip over their own tails in frantic efforts to apply ants with their bill to the underside of their wings. A recent theory suggests that this peculiar behaviour results from skin irritation caused by new feather growth. Possibly ant excretions have a soothing effect on the bird’s skin. Birds have been known to use a wide variety of substitute materials such as fruits, tobacco, mustard, and vinegar for anting. One observer who kept tame Blue Jays had a bird that anted with "various bitter, sour fruit juices and hair tonic"; a second jay anointed itself only with the hair tonic. Another person had a captive Blue Jay that applied burning cigarettes to its feathers! This strange behaviour requires further study. Observations of anting in any bird species are worth reporting to a local natural history journal or magazine.

The fact that the Blue Jay sometimes preys on the young of other birds is no cause for its condemnation, for this bird plays a role in keeping bird populations, as well as some insect pests, under control. As well, Blue Jays are an attractive addition to our forests, towns, and cities. In Audubon’s words: "Their movements on the wing are exceedingly graceful. As they pass from one tree to another, their expanded wings and tail—so beautiful in tint and form—never fail to delight the observer."

The Blue Jay, which occurs from southern Canada south to Texas and Florida, is only a straggler on the open plains. It breeds in the mixed-wood forests of central Alberta, Saskatchewan, and southern Manitoba, and from there east through central and southern Ontario to southern Quebec, the island of Newfoundland, New Brunswick, Prince Edward Island, and Nova Scotia. In the northernmost part of its range it may be seen with the Gray Jay Perisoreus canadensis, a bird that breeds much farther north to the tree line. In central Florida the Blue Jay coexists with the Scrub Jay Aphelocoma coerulescens. The Steller’s Jay Cyanocitta stelleri replaces the Blue Jay west of the Rockies and is fairly similar in general habits. This bird is the "blue jay" to the people of British Columbia. Prince Edward Island and British Columbia have selected the Blue Jay and the Steller’s Jay, respectively, as their provincial birds.

The Blue Jay is partially migratory, withdrawing several hundred kilometres in some winters from the extreme northern parts of its range. It migrates quietly by day, usually in loose flocks of 5 to 50 or more. Occasionally up to 3 000 migrants have been seen in one day at Point Pelee National Park where Blue Jays congregate before crossing Lake Erie.

A famous painting by the 19th-century naturalist and author John James Audubon shows a group of three lively Blue Jays feasting on freshly laid eggs from some other bird’s nest. All corvids are bold and aggressive and often prey on the eggs and young of other kinds of birds. While the eggs and young of other birds are, at times, an important food source, the bulk of the Blue Jay’s diet consists of vegetable material such as wild fruits, acorns, hazelnuts, beechnuts, corn, and other grains, and also insects of many kinds. Blue Jays can be important in the local control of the harmful tent caterpillar. One pair of Blue Jays may feed hundreds of the pupa, or immature form, of tent caterpillars to their nestlings in early summer. The parents extract the pupae from their tough, silken cocoons and carry several inside their mouths at one time to the young. The destruction of cocoons for this purpose eliminates thousands of moth eggs due to hatch the following spring.

Typical of a bird that eats many different types of food, the Blue Jay has a heavy bill useful in pecking open cocoons as well as acorns and other hard-shelled nuts. It frequently carries off acorns and beechnuts and conceals them under leaves, in grass, and in hollow trees. In winter, Blue Jays commonly carry away food from a feeding station, especially bread and sunflower seeds, to be hidden under trees and shrubs and eaten later. A regular supply of peanuts, mixed grains, and especially sunflower seeds will attract Blue Jays to a feeding shelf. They seem to enjoy holding the hull of a seed or peanut beneath their feet while pecking it open to extract the kernel.

The Blue Jay builds a bulky nest, about 18 cm in diameter, of small twigs and a variety of other materials such as lichens, moss, grass, and paper. Both sexes help to build the nest and care for the young. The inner cup of the nest, about 10 cm in diameter, is shaped with mud and lined with fine rootlets and feathers. Before the final nest is made, the birds build several incomplete nests as part of their courtship ritual. The nests are 3 to 10 m from the ground, in a tree or shrub. The Blue Jay often nests in settled areas, sometimes close to buildings. During the nesting season, especially in the more remote parts of its range, the Blue Jay may be quiet and unobtrusive even near its nest.

As do many species in which the male feeds the female when she sits on the nest, the Blue Jay practises courtship feeding. This begins prior to nest-building and continues through egg-laying and incubation, or warming of the eggs until they hatch. The incubating female is sometimes fed on the nest, but more often she joins her mate in a nearby tree, assumes the begging posture of a juvenile, and is then fed. There are also reports of some group displays in which several jays hop stiff-leggedly from branch to branch, but little else is known about their courtship habits.

Four or five eggs are laid in a clutch, or set of eggs. From one clutch to another, the eggs vary in colour from buffy to greenish or bluish, spotted and blotched with brown. Incubation of the eggs lasts from 16 to 18 days. The young at the time of hatching are entirely naked and quite helpless, although on certain signals, particularly the thump of a bird landing on the edge of the nest, they raise their heads with mouths open ready to receive food from the parent bird. Seventeen days later they are well feathered and ready to leave the nest. They are usually out of the nest and on the wing, or fledged, by 21 days of age. About three weeks later they begin searching for food for themselves, but they continue to follow their parents and are fed occasionally for one or two months longer, sometimes until they are four months old.

Because they are generally non-migratory, some jays are unprotected by laws, although the Blue Jay is generally protected by provincial legislation.

All About Birds, Blue Jay