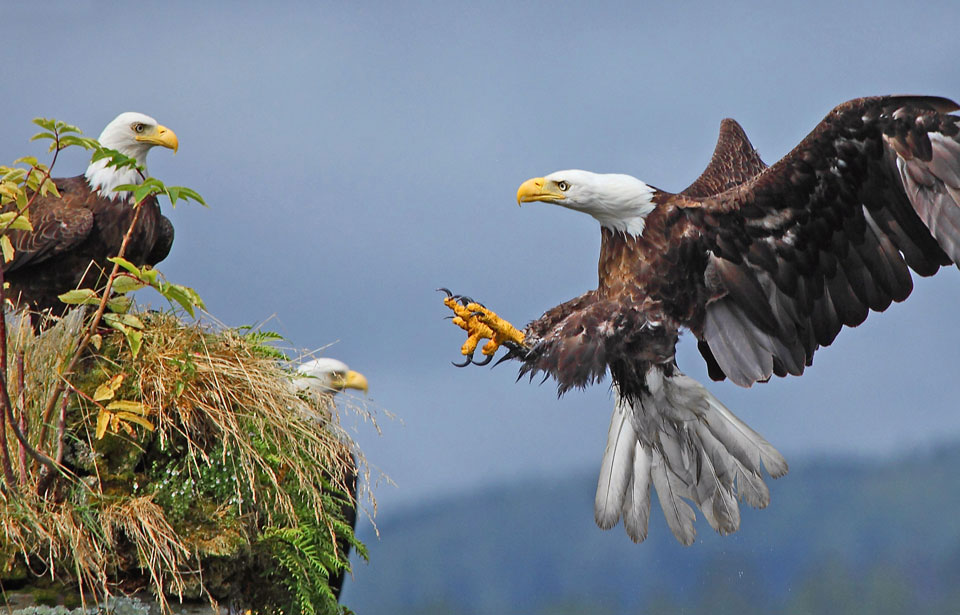 The Bald Eagle Haliaeetus leucocephalus is an enormous bird. Haliaeetus denotes "sea eagle," and leucocephalus refers to its white head. The wings, wide and long for soaring, span more than 2 m. When perched, the bird measures about 76 cm tall. Weights of over 7 kg are not uncommon. On average, females are larger than males, and juveniles are larger but lighter in weight than adults of the same sex. Bald Eagles that breed in the southern United States are smaller than those that breed farther north.

Males and females have identical plumage. Adults have a dark brown (almost black) body that contrasts sharply with the white feathers on the head and tail, and the yellow beak, eyes, and legs. It takes a young Bald Eagle four or five years to achieve this distinctive coloration. Until then, bird watchers may confuse it with other birds, such as the Turkey Vulture and Golden Eagle.

Bald Eagles do not have a wide range of calls. Their voice, which carries long distances, sounds something like a gull’s scream broken into a series of notes.

To breed, most Bald Eagles choose sea coasts and lakeshores, where suitable nest trees are available. Some Bald Eagles may remain in their breeding habitat year round if their fishing areas do not freeze over. Those that are forced to move in search of open water may fly from inland nesting sites to nearby coastal wintering areas, or they may migrate between a northern breeding area and a southern wintering area.

Bald Eagles can see three or four times farther than people, an obvious advantage to a bird that hunts and scavenges. They probably hear about as well as humans do, but their senses of taste and smell are poorly developed. Most of Canada’s breeding population of Bald Eagles is found in British Columbia, especially along the Pacific coast. The boreal, or northernmost, forests of Alberta, Saskatchewan, Manitoba, and northwestern Ontario support healthy breeding populations as well. In the east, there are small but important nesting populations in Cape Breton and along the Newfoundland coast. Other provinces and territories have fewer breeding Bald Eagles. In the United States, this white-headed bird of prey still nests in more than half of the states.

Travelling alone or in pairs, birds breeding in central Canada migrate south in autumn to the west-central and southwestern United States and return north in the late winter or early spring. They may or may not frequent the same nesting grounds and wintering areas each year. Young Bald Eagles from the population that breeds in Florida during November and December wander north in the summer, sometimes as far as the Maritimes.

Coastal British Columbia provides habitat for most of the Bald Eagles that winter in Canada. Wintering eagles typically congregate in groups of a few to perhaps a thousand birds. The largest winter gathering of Bald Eagles on the continent is along the late-freezing Chilkat River in Alaska, where thousands of Bald Eagles gather from October to December to feed on salmon that have died after spawning. An annual census of wintering eagles is done in Canada and the United States in mid-January.

The Bald Eagle feeds primarily on fish, aquatic birds, and mammals, which it may take alive or find dead. Much of its live prey, especially the waterfowl, consists of sickly individuals or those wounded by hunters. When its staple foods are not available, a Bald Eagle will eat almost anything that has food value.

These large predators take food however they can, stealing it from other birds (e.g., fish from the Osprey), scavenging on carrion (including road kills and fish killed passing through hydropower turbines), and hunting in flight, from a perch, on the ground, or in shallow water. They sometimes feed in groups, although they rarely cooperate in hunting. Generally, the adults are likely to hunt and kill, whereas the younger birds rely more heavily on scavenging and piracy.

Individuals may not breed every year. Some may mate for life, but if one member of a pair dies or disappears, the other will take a new partner. Failed breeding attempts may prompt a pair to split up and look for new mates. Infrequently a subadult will mate with an adult.

Bald Eagle courtship involves elaborate and beautiful nuptial displays, both calls and aerobatics, including cartwheels, roller-coaster swoops, and chases. Usually the pair builds its nest near fresh or salt water in the tallest tree of large diameter in a forest stand and defends a surrounding 1- to 2-km2 territory against other eagles. In some parts of Canada, eagles seem to prefer to nest in conifers, especially pines. Old-growth forests provide the most suitable nest sites, but where there are no trees, the birds nest on cliffs, rock pinnacles, or, in the northern tundra, the ground. Only a few eagles have been recorded nesting on human-made structures.

The Bald Eagle’s nest is the largest of any bird in North America — on average 1.5 to 2 m across and about 1 m tall. Long-established nests can be much larger (observers recorded one that was 3 m across and 6 m tall), because the occupants add new materials to the basic structure of branches and twigs each season. In the centre is a small depression lined with soft vegetation and feathers in which the female Bald Eagle lays one to three (usually two) large dull white eggs, two to four days apart. During the 35 days of incubation when the eggs must be kept at the correct temperature and protected from predators, one of the adults (usually the female) is on the nest almost all the time.

The eggs hatch two or three days apart. Covered in grey down at hatching, eaglets begin to sprout feathers at four or five weeks. The female Bald Eagle, and to a lesser degree the male, broods the young, shielding them from rain, wind, and sun, continuously at first and sporadically after the first month. The male carries most of the food to the nest during the first weeks; both adults do so after this. The largest nestling eats first. Dominant, it may even kill its smallest sibling. Young eagles have enormous appetites and grow very rapidly, increasing from about 90 g at hatching to an average of 4 kg (males) and 5.1 kg (females) in two months. After six or seven weeks the juveniles feed themselves and show considerable aggression toward the parents. Males can fly at about 78 days and females a few days later.

The timing of the breeding cycle depends on where the nest is located. Northern populations breed later and have a shorter breeding season. For example, egg laying is from mid-November to mid-January in Florida, but in April and May in Canada and Alaska. From the laying of the first egg to the fledging, or first flight, of the last young commonly takes 16 to 18 weeks.

Although its total numbers have declined greatly since Europeans came to North America, this eagle is still fairly common in western Canada and in Alaska. Local populations in parts of Canada, (e.g. southern Ontario, New Brunswick) and in the lower 48 states of the United States are endangered or extirpated.

The first major decline in numbers of Bald Eagles occurred in the late 1800s and it affected the United States population more than Canada’s, because the majority of Canada’s Bald Eagles lived in relatively sparsely inhabited areas and therefore were not as vulnerable to human disturbance. That first decline was due to the activities of thousands of European settlers as they moved westwards, cutting the forests, ploughing the prairies, competing with the eagles for food, and purposely and accidentally shooting and trapping the great birds themselves. Eagles were just beginning to recover from the first decline, perhaps in part thanks to the U.S. Bald Eagle Act of 1940 that prohibited the killing of Bald Eagles in the lower 48 states, when the number of eagles in both Canada and the United States declined again. The new threat was noticed first in the late 1940s by Charles Broley, a Canadian banker retired to Florida. He guessed, correctly, that the pesticide DDT, which had been sprayed along the gulf coast to control salt marsh mosquitoes, caused the drop in the number of eaglets hatched each year. Concentrations of DDT and its metabolites, or the substances that form as DDT decomposes, were being magnified hundreds of times as they passed up the food chain (i.e., from water to zooplankton, or microscopic organisms, to small fish to big fish to gulls to eagles). The levels in eagles were high enough to disrupt the birds’ absorption of calcium, and the females laid eggs whose shells were too thin.

Since the use of most organochlorines (DDT and related compounds) has been restricted in Canada and the United States, more eagle pairs have been successful in producing their offspring, although some populations are still raising fewer young.

Loss of habitat also affects reproduction. The cutting of nest trees and perching and roosting trees occurs throughout forested areas. The quality and availability of food (especially fish) may be reduced in some areas by acid rain. Eagles prefer solitude when breeding; human disturbances are disruptive, in some cases leading to desertion of the nest.

To encourage reproduction, breeding territories can be protected by establishing buffer zones around individual nest sites to protect the nest tree, perching trees, and feeding areas from human disturbance. Some provincial endangered species acts do provide legal protection for eagle habitat. Reintroduction, including the most common and successful method, hacking, in which young birds are reared and released at designated sites, has been instrumental in some population recoveries. Breeding eagles in captivity, rehabilitation of injured birds, establishment of sanctuaries (especially on wintering grounds), and the limited use of artificial nests have also been successful.

However, even if a population is reproducing at the maximum possible rate, it can still become extinct if not enough mature birds survive. Although Bald Eagles may live for 50 years in captivity, they are unlikely to live that long in the wild, where they face natural hazards, such as weather, and human-caused threats, such as power lines. Survival of wild eagles is lowest during the early years, especially during the first winter, and less than half of the eagles produced may reach adulthood. About two thirds of reported Bald Eagle deaths are due to shooting and incidental trapping by people and electrocution on, and collisions with, power lines.

Exposure to mercury and lead also occurs. The production of methylmercury by bacteria in sediments and water increases under certain conditions (for example, by rotting vegetation in recently flooded lands behind hydro dams). Like DDT, methylmercury can concentrate in food chains. In addition, eagles may be poisoned by lead obtained when they eat waterfowl that were shot with lead shotgun pellets.

Canadian Bald Eagle populations are generally stable or increasing slightly, although the situation varies regionally. Currently, populations in coastal British Columbia, the boreal forest, and the Atlantic provinces of Canada are doing well. If mortality rates continue to be high, population growth will be slow. However, if suitable habitat remains available and human disturbance is kept to a minimum, we should be able to enjoy this magnificent soaring bird for some time to come.

All About Birds, Bald Eagle