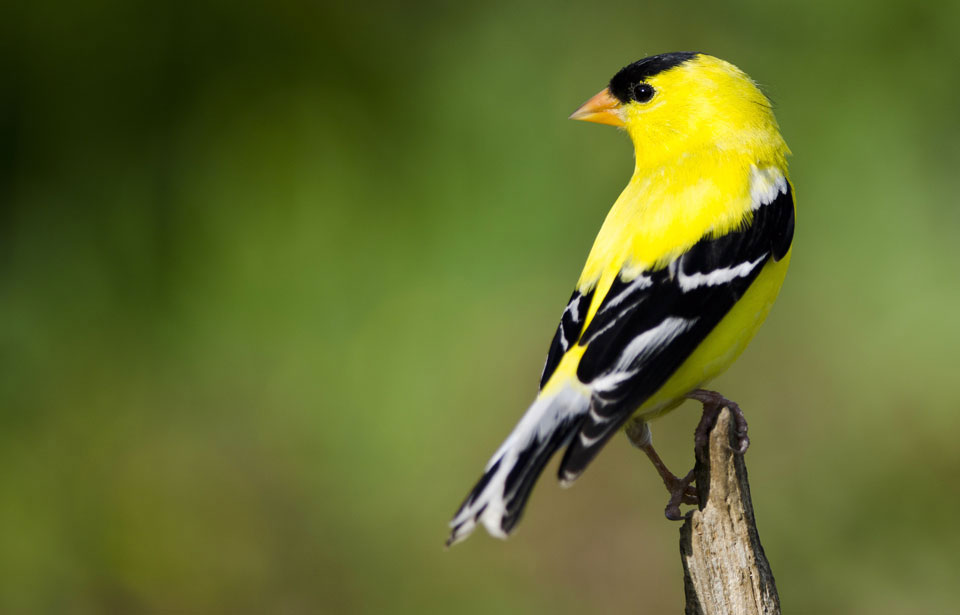 With its short, heavy, conical beak, the American Goldfinch Carduelis tristis is typical of North American seed-eating birds that are members of the finch (Fringillidae) family. The goldfinch averages 11 cm in length, much the same size as the English Sparrow, and weighs about 11 g.

In spring the birds moult, or shed, all but their black wing and tail feathers, and the bills of both sexes turn orange. The male assumes brilliant canary yellow plumage and a striking jet black cap. In flight, a white rump contrasts with the black tail. The summer female is olive yellow, with a bib of yellow on her neck and breast.

After a complete moult in the fall, the birds grow plumage that is almost identical in colour for both sexes. They are buff-coloured below and olive brown above. Their wings are black with white wing bars, and the black tail is etched with white. The face and neck are a pale yellow, only a hint of the bright yellow of summer. The male’s lesser coverts—the feathers covering the shoulders—are yellow.

During their first autumn and winter the juveniles are wood brown above with buffy, rather than white, wing markings and dull black shoulders, which distinguish them from the adults.

A bird similar in appearance to the American Goldfinch, the Lesser Goldfinch Carduelis psaltria, is occasionally seen in British Columbia. It is slightly smaller than the American Goldfinch, measuring about 10 cm in length. In summer the adult male is black or olive above, rather than yellow, and he retains the black cap all year. The female has an olive rump instead of a pale one.

The American Goldfinch is easily detected in the spring or summer as a flash of yellow, flying with an undulating motion and calling perchicoree, perchicoree.

When the male accompanies the female to search for nesting materials, he perches nearby, singing and calling to his mate. At the first sign of danger the male or female will whistle sweet or call bearbee, bearbee, bee, bearbee.

While the female is incubating, or warming, the eggs, she is dependent on her mate for food. When he flies over the nest, displaying and calling with his esophagus full of seed, the female responds to her mate’s calls with a soft continuous teeteeteeteete sound.

Shortly before fledging, the young develop a fledging call that sounds like chick-kee or chick-wee. They utter this sound for the first month after they leave the nest until they are completely independent.

The American Goldfinch prefers trees in open places, especially in orchards and along roadsides. Except during the nesting season, it is a sociable bird that seeks its own kind to feed and fly with. In winter it mingles with its relatives—the redpolls and siskins—feeding in weedy fields and in orchards close to wooded areas.

The American Goldfinch breeds late in the year, from July to September, a fact that has puzzled many scientists. Some have suggested that the timing of breeding is linked to the bird’s unusual habit of moulting, or shedding feathers. The American Goldfinch is the only cardueline finch to acquire its breeding plumage by moult. In most finches, the feathers are gradually worn down through use, resulting in a changed appearance by the time the breeding season arrives. Scientists suggest that the prolonged moult, which is unusual in a bird of the temperate zone, may be the only way a bird on a protein-poor seed diet can fulfill the energy demands of breeding. Thus, while the greater abundance of seeds in late summer compared to May or June may be important in ensuring larger supplies of food for the young, completion of moult rather than food availability may determine the timing of the American Goldfinch’s breeding.

The American Goldfinch breeds across southern Canada from British Columbia to the island of Newfoundland and through most of the United States north of the Gulf states. As winter approaches, the goldfinch moves short distances towards the south. Its winter range includes southern British Columbia, Manitoba, Ontario, New Brunswick, Nova Scotia, and most of the United States.

The American Goldfinch has a varied diet. Being principally a seed-eater, the bird has an abundant food supply for much of the year, including seeds of thistle, dandelion, ragweed, mullein, cosmos, goatsbeard, sunflower, and alder.

In its nonbreeding range it is easy to attract the American Goldfinch to a bird feeder. It prefers hanging column feeders with places to perch at each outlet. These feeders can be filled with sunflower seeds or, better yet, the commercially available thistle, or Niger, seed imported from Africa. The birds will also come to window trays and bird tables, where they will eat sorghum, millet, canary seed, cracked nutmeats, and sunflower seeds.

Before a storm the birds will feed in a frenzied manner at feeders and show a significant gain in weight before and during the storm. This behaviour may increase the American Goldfinch’s chance of survival under adverse conditions.

Although some finches use their feet sparingly or not at all to help in feeding, the American Goldfinch uses its feet extensively. For example, it will fly to a cluster of seed capsules at the top of an evening primrose and cling to the stalks in such a way that it can delicately extract the seeds. In the spring the American Goldfinch feeds on the catkins hanging from birches and alders by pulling them up with its beak and using the toes to clamp them down on the branch. Such dexterity with the foot and bill, combined with low body weight, enables the American Goldfinch to take advantage of food sources relatively inaccessible to some potential competitors. The birds will also eat insects, including plant lice and caterpillars, and will root out larvae from galls and fruits.

In the spring the start of courtship behaviour is signalled by one or more males chasing a single female. The female flies in an elusive zigzagging manner, and the male at times breaks into a slow flat flight. During courtship, a pair will circle about, with the male warbling throughout the flight. Mating takes place in late summer, as does nest building.

The male marks his domain by warbling and flitting from perch to perch around the perimeter of the territory. As well, he circles and performs two flight displays. One is a low flat flight. The other is an exaggerated version of his normal undulating flight in which he tucks his wings close to his body, plummets earthwards, and then spreads his wings to coast upward in a long series of loops.

Two or three pairs group their territories together in a loose colony. This may aid in the sharing of information about food and in defence against predators. Where food and water are plentiful there are more nests.

The female builds the nest in late summer up to 10 m off the ground in the terminal branches of a bush or tree. Nest building occurs in 10- to 40-minute spurts, during which material is brought to the site and laid down. There may be periods of hours or days when nothing is added.

The female strips fibres from dead trees, weeds, and vines and uses catkins as well as grass to construct the outer shell of the nest. She sometimes dismantles the nests of other birds for the materials. She reinforces the rim of the nest with bark bound by sticky spider silk and caterpillar webs. The nest is lined with plant down from thistles, milkweed, and cattails. The inside diameter is about 6.5 cm.

The male often accompanies the female on flights for nesting materials. He may carry some materials back, but leaves the actual construction of the nest to the female.

The average interval between the start of the nest and the laying of the first egg is eight days. The female lays four to six bluish white eggs, roughly the size of peanuts.  While she incubates, or warms, the eggs she is fed by her mate. With his esophagus, or tube from beak to stomach, full of seed, the male flies over the nest, displaying and calling. The hungry female responds by calling teeteeteeteete softly and continuously. Sometimes the female leaves the nest to receive the seed. At other times, the male perches on the rim of the nest, takes his mate’s bill in his, and feeds her as if she were a nestling.

After about 13 days of incubation, the young hatch, covered in fluffy grey down. Their eyes begin to open after three days. In the first week of life the nestlings are quiet, but by the second week they are active and noisily seek out the food brought at long intervals by their parents. The adults feed the young by regurgitating, or bringing up, a mass of undigested seed bound together by mucus. They place this mass in the nestlings’ mouths.

Initially, the adults remove fecal sacs, or bodily waste, deposited by the young, but later the young defecate over the rim of the nest, leaving a coating on the outer layer. The young birds grow rapidly; by the time they fledge, or leave the nest, 11 to 15 days after hatching, they are covered with the beginning of the olive-yellow juvenile plumage.

Shortly before leaving the nest they develop a fledging call that sounds like chick-kee or chick-wee. The first bird clambers out of the nest to a nearby branch and tentatively tests its wings on short flights. The others soon follow. The female may begin construction of a new nest for a second brood. The male is responsible for feeding the young birds and finds his charges by listening for the fledging call. Within a month’s time, the young are totally independent and no longer give this call.

American Goldfinches and their eggs are vulnerable to a variety of predators, including cats, weasels, snakes, squirrels, jays, and Sharp-shinned and Cooper’s hawks. Accidental deaths can occur when the birds entangle themselves in a spider’s web or in plants with prickly flowers, such as burdocks.

The Brown-headed Cowbird lays its eggs in the nests of smaller songbirds such as the American Goldfinch. But the songbirds’ seed diet is insufficient to meet the demands of the growing cowbird young, most of which die as a result. However, the presence of the cowbird does disrupt successful nesting.

All About Birds, American Goldfinch