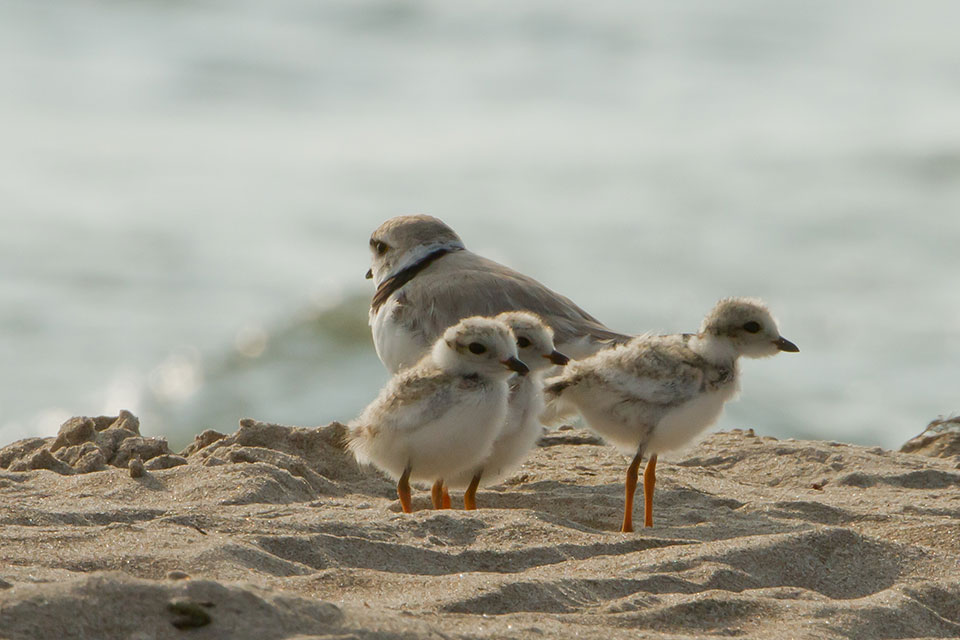 Migratory birds are good indicators of environmental health because they are visible and relatively easy to study – what’s bad for birds is often bad for humans! Migratory birds play a key role in the Canadian economy, feeding many families and supporting recreational opportunities that create jobs and generate millions of dollars in revenue!

Celebrate the Centennial of the Migratory Birds Convention! Barrels packed with pigeons, ducks and shorebirds, destined for the dinner table, were transported by train to the city. Millions of birds were killed annually to adorn the hats of rich socialites and small-town women alike. When the skies were filled for days with migrating birds, the supply seemed endless. It was the late 19th century, and North Americans were slowly beginning to realize that the growing demand for birds had created pressure that populations simply could not withstand. The most abundant bird species in North America, the Passenger Pigeon, went extinct with the death of Martha, the last lonely bird of her kind, in 1914. Around the same time, public awareness of the profound effects humans were having on wildlife and their habitats marked the dawn of a new crusade: the conservation movement. Concerned individuals came together to form naturalist clubs and conservation organizations to protect habitat and call for a halt to the uncontrolled harvests. Many of these groups are still active today.

In Canada, conservationists pioneered the practice of placing bands on the birds’ legs to identify individuals. The recovery of bands and the coordination required to manage birds that routinely crossed borders brought forth the need for an international agreement.

One hundred years ago the first international treaty on wildlife conservation was born, beginning a new era of international collaboration for wildlife and habitat conservation. Signed on August 16, 1916 the Convention for the Protection of Migratory Birds (more commonly known as the Migratory Birds Convention) between Canada and the United States was intended to regulate the bird’s harvest and assure the preservation of species either harmless or beneficial to man.

And birds are beneficial. Their roles in pollination, seed dispersal, pest control and nutrient cycling keep our natural systems functioning. They also inspire art, and compel us to glimpse their beauty.

The Migratory Birds Convention commits Canada and the United States to “work together to cooperatively manage populations, regulate their take, protect the lands and waters on which they depend, and share research and survey information.”
- Convention for the Protection of Migratory Birds

What a Difference a Century Makes! In order to implement the Convention, in 1917 the Migratory Birds Convention Act was passed into law in Canada; the following year, the United States government passed the Migratory Bird Treaty Act. The Migratory Birds Convention and the Act have shifted the harvest of birds from uncontrolled to sustainable. Waterfowl in particular have largely recovered to healthy levels thanks to decades of improved science, harvest management and coordinated habitat conservation under the North American Waterfowl Management Plan. When researchers began banding waterfowl, they realised that the birds follow established migration corridors as they fly north to breeding areas in the spring, and return south in the fall. In 1952, the four Flyway Councils (Atlantic, Mississippi, Central and Pacific) were created to coordinate research and management of game birds along these migration routes. For 60 years, the Canadian Wildlife Service and the U.S. Fish and Wildlife Service, in cooperation with other government agencies and organizations, have been conducting annual surveys to report on population status and provide information required for harvest management. The introduction of the Migratory Game Bird Hunting Permit in 1966 allowed a better assessment of the harvest itself and how it can be expected to influence the health of bird populations. Other groups of birds are not doing as well and new threats have emerged. Chief among these is the loss, degradation and fragmentation of habitat. The need to protect habitat for birds was recognized as early as 1887, when the first bird sanctuary in North America was set aside on the shores of Last Mountain Lake in Saskatchewan. And when the Migratory Birds Convention Act (MBCA) was adopted in 1917, it included regulations allowing the creation and management of Migratory Bird Sanctuaries in areas that provide important habitat. In 1919, Bonaventure Island and Percé Rock in Québec became the first Sanctuary designated under the MBCA. It protected an important breeding area for seabirds such as Northern Gannets, Common Murres and Black-legged Kittiwakes. There are currently over 90 Migratory Bird Sanctuaries across Canada that protect more than 11 million hectares of terrestrial and marine migratory bird habitat. But birds need more than isolated habitat patches. Although our country may appear to have abundant natural habitat, the ongoing declines in many species of birds, notably grassland birds, may indicate that we are getting the balance wrong. Partnerships like the North American Bird Conservation Initiative can successfully manage the landscape by integrating wildlife needs, industry standards and practices, and conservation through stewardship and official protected area status.

The past century has also seen the human footprint reach skyward, with the construction of tall buildings, communications towers and wind turbines. Migratory birds are at high risk of collisions with these structures, especially those that have lights that lure night migrants. Even house windows play a role when they reflect images of the surrounding vegetation or the sky to unsuspecting birds. Predation by introduced species, especially domestic and feral cats that are dear to many Canadians, has also increased over the years as the numbers of these animals rise. For species that migrate, each stage of life is critical for survival — birds that arrive in poor condition in spring may not successfully reproduce, for example. Habitat availability is also an issue in all parts of the birds’ annual range — the breeding grounds, their migratory stop-overs, and their winter destinations.

Climate change may be affecting migration and the survival of young as the timing of food availability shifts and increasingly frequent storms make flight and holding course difficult. Migration is a risky business — the species that travel the furthest, like some shorebirds, have some of the steepest population declines. These spectacular feats of athleticism have persisted for tens of thousands of years — how sad to think that these ancient journeys could be imperilled. Some threats to migratory birds still remain a mystery, like the exact causes of declines among aerial insectivores (birds such as swallows that catch insects while flying).
These declines could be linked to effects on their insect prey from pesticide use, or from shifts in the timing of insect hatches due to climate change. The migration routes of other species, and even their destinations, are still unknown. But emerging technology is helping answer these questions as tracking devices become small enough to attach to some of the smallest birds. Information that previously took decades of study to unearth can now be revealed in a single season.

The Next One Hundred Years The Migratory Birds Convention has stood the test of time. Prior to the its signing, Canada forever lost the Great Auk, the Labrador Duck and the Passenger Pigeon. Despite its many successes, today there are more than 70 species and populations of birds listed under the Species at Risk Act. Our successful collaboration with the United States is as important now as it was in 1916, and over the next century, Canada must continue expanding its shared efforts to include other countries that are home to “our” migratory birds during their annual cycle.

What you can do to help

The participation of Canadians who care about birds has been central to building our knowledge, implementing conservation programs and keeping governments engaged. The future of bird conservation depends on your continued efforts! Here’s how you can help: Be a citizen scientist and take part in a bird survey. There’s one for every skill level, including Christmas Bird Counts, breeding bird atlases, the Breeding Bird Survey, and monitoring programs for individual species like the Chimney Swift or groups such as water birds. Hunters can participate in the National Harvest Survey.

Protect habitat in your community and your yard. While large areas of habitat are important, small natural spaces also benefit birds. Many bird or nature clubs as well as municipalities have projects to retain and create habitat – lend a hand!

Reduce hazards to birds by avoiding pesticide use, making windows safe and supervising your pets when they’re outdoors.

Get engaged and let all levels of government know that birds and their habitats are important to you. Promote bird-friendly construction and support businesses that follow sustainable practices.

Celebrate birds by sharing your knowledge, going birdwatching or joining others at events on International Migratory Bird Day (the second Saturday in May) or other festivals. You’ll have fun, meet people and learn new things!

Join the celebrations of the Migratory Birds Convention’s Centennial, and help get the next one hundred years of bird conservation off to a flying start!