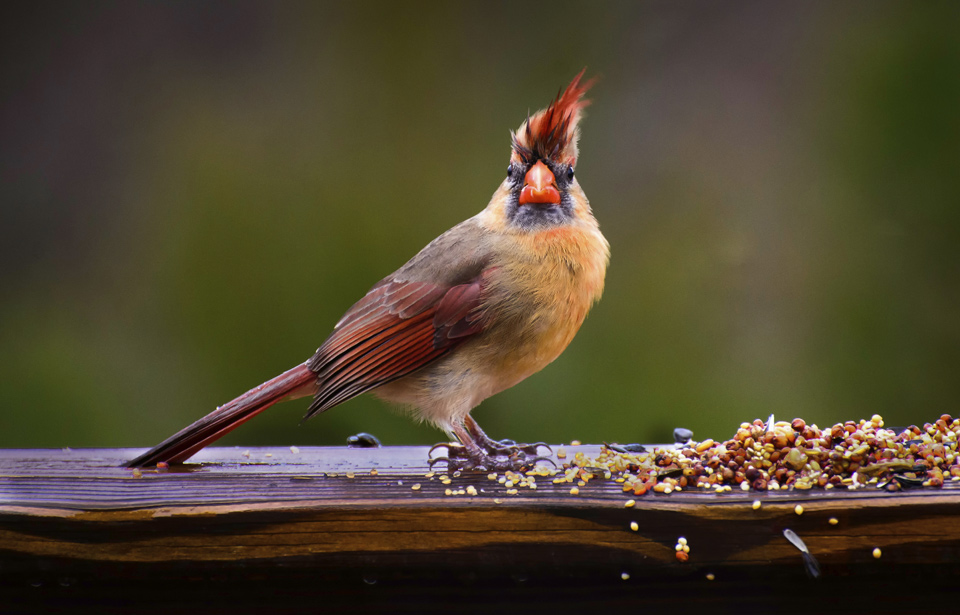 The best way for most Canadians to start a study of birds is to establish a bird feeder, and the best time to feed birds is in the winter, when there are fewer species present and when many birds can be attracted to the bird feeder for observation. Watching the feeding birds can help people recognize the different species and learn about the birds’ habits of migration, nesting, and feeding.

Feeding birds can be a very simple affair. Just scattering bread crusts on the snow or seed on a bench or table will attract some birds. But if bird feeding is to be a long-term interest, some additional steps should be taken to avoid problems.

A hopper-type feeder that can hold food for several days can help ensure a continuous supply. Many good feeders can be made at home. A plastic bleach bottle can be cut to provide a large opening in one side and then hung from a branch by its handle. Half a coconut, pine cones, or a piece of bark can be used to hold a suet mixture. Suet can be hung from a tree in a plastic mesh onion bag. A Christmas string of popcorn and cranberries draped on a tree is a festive offering for the birds. Just be sure that feeders have no exposed metal parts in areas where the weather gets very cold. Commercially built feeders can also be an excellent value.

Commercial bird seed mixtures sometimes contain seeds that are of little interest to most birds. Millet is good, but a study by the United States Fish and Wildlife Service showed that, in one region at least, white proso millet was generally preferred to yellow or red millet. Many species like cracked corn, but the corn is likely to spoil if wet, and it is more attractive to species, like pigeons, that are often considered pests. Oats, buckwheat, wheat, and rapeseed have limited interest for birds. Niger seed (an imported thistle seed) is excellent for small finches but can be expensive.

Many types of kitchen scraps can be given to birds. Of these, some of the most often used are baked goods (give sparingly and watch for mould) and fats. Larger pieces of fat, especially beef suet, can be used as is or can be rendered by heating to separate the fat from the connective tissue. Melted fat can be mixed with bread crumbs and seeds and packed into dishes or other feeders. Peanut butter is loved by birds, but some people say it should be mixed with fat to reduce any danger of choking.

Most birds appreciate water to drink if the weather is not too cold. Birds also use grit to help their digestion. Provide dirt, sand, or ground eggshells separately from other foods for this purpose. Sometimes a few wood ashes or a dry supply of salt can provide minerals the birds need.

To limit cost, put a measured amount of food out each day, whatever you decide you can afford. If the feeder is empty an hour later, don’t worry. If you are consistent, the birds will adjust their foraging to the supply and find more food elsewhere.

What kind of birds can you expect once you’ve put out some food? The bird species attracted to a feeder will depend on many factors, including the geographic region you live in, the type of food you offer, the habitat of the immediate area, the habits of individual bird species, and the weather. Habitat is a very important factor in attracting birds: an area with trees and shrubs will be the most likely to appeal to them. It is also important to start feeding early in the fall before the birds become set in their winter foraging patterns.

Table 1 lists many of the species that come to feeders in Canada. These species, most of which are discussed below, are widespread and can be found in most regions where there are mature trees, even in densely populated urban areas. Table 1 also indicates some of the birds’ favourite foods. Do not assume, however, that birds in your area will necessarily exhibit the preferences shown. Experiment, and you may find other useful foods not listed in the table.

Chickadees are some of the most familiar birds that visit feeders. They travel around a small area of a few hectares, stopping in woodlots where they look for insects and insect eggs and coming to feeders for sunflower seeds and suet. They are adept at opening sunflower seeds by holding them with their feet and striking them with their bills, like little woodpeckers.

Blue Jays are conspicuous visitors with their bright plumage. In the fall, Blue Jays store food, sometimes carrying away many sunflower seeds packed in their cheeks. At that time of year you might like to feed the Blue Jay some whole corn, which is less expensive than sunflower seeds. Blue Jays are much less trusting of people than chickadees are and usually retreat to a distant viewing point when people come to the feeder.

Several species have changed their winter range, thanks to bird feeding. Among these are Evening Grosbeaks, which come in flocks for sunflower seeds. Cardinals have started nesting far north of their historical range, probably because of the winter food provided at feeders.

Some birds are quite unpredictable in their annual visits to bird feeders. Redpolls, Evening Grosbeaks, and Pine Siskins come in variable numbers depending on their natural food supply and on the weather. Others, such as the Hairy Woodpecker and the Black-capped Chickadee, are resident year-round in the feeding area and so can be expected at feeders with some certainty.

The House Finch is of special interest at feeders. It was originally a western species, but in 1941 a few individuals were released in New York City. Since then it has spread and has become common in southern parts of Ontario and Quebec. More recently it declined again, as a result of a disease that may have been spread, in part, through concentration of the species at bird feeders.

Some birds that usually eat dormant insects and their eggs in the winter can be attracted to feeders by fat-rich foods such as suet, and, for some species, sunflower seeds. Nuthatches, woodpeckers, and chickadees are all fat-loving species. Some people do not like pigeons, starlings, or House Sparrows and prefer jays, chickadees, and finches. Offering sunflower seeds alone may help eliminate the first group and attract the second. Fat attracts starlings but is probably worth it if it brings woodpeckers too.

A yard with plantings of bushes such as saskatoon, elderberry, mountain ash, nannyberry, and crabapple or vines such as wild grape or Virginia creepers will attract birds that eat fruit and are rarely found at regular feeders. Even the American Robin will overwinter where such a food supply is abundant.

Sometimes problems develop at bird feeders. Perhaps the most common is the presence of squirrels, which can eat a large amount of food and can also damage wooden feeders. It is possible to buy a squirrel-proof bird feeder. You can also make one at home by placing inverted metal funnels on the feeder post below the feeder or by positioning large disks above hanging feeders. Remember that squirrels can jump, especially from above, that they can walk on a tight rope, and that they can get toeholds on any imperfections in whatever you are using to exclude them.

Cats and sometimes dogs can be a worse problem; they may kill the birds or take suet at feeders. If these animals have free range around the feeder, avoid giving them places to hide from which they can pounce on birds. Be sure the feeders are close to natural hiding places for the birds, such as shrubs, but far enough away from them—2 to 3 m—to keep birds safe from cats that may be using the shrubs as cover. Other predators may also visit feeders, but these wild animals have a role in nature, and we should respect their need for food.

Sometimes birds fly into windows and injure themselves. This usually happens when feeders are placed less than 10 m from windows, because at this distance, birds can see vegetation reflected in the windows or through the windows. If a window near a feeder has a number of such bird strikes, try leaving a curtain closed when the birds are feeding. If this does not help, you may have to move the feeder. A bird feeder can usually be safely fastened to a window or placed very close to it, because in this case, if birds are startled while at the feeder, they will be moving too slowly to injure themselves if they hit the window.

Most other problems can be avoided by regular attention to the feeder. Keep the feeder well stocked in bad weather, and do not let wet food stay in the feeder long enough to spoil. Notice which foods are being ignored by the birds, and adapt your feeding plan accordingly.

Many people like to feed waterfowl, including ducks and geese. In fact, it is best not to do so. Water birds that come to rely on handouts may lose their compulsion to migrate and their fear of people, and they may pick up habits that might harm both the birds and people. When birds are not afraid of cars and planes, for example, they may cause safety problems by walking across roads or flying across airport runways. And the birds’ tendency to gather in large groups in confined areas when they expect to be fed increases competition for limited food supplies. When winter arrives, the added stresses of eating less nutritious food than they would consume under normal conditions and exposure to harsh weather make the birds more susceptible to life-threatening diseases. If you just can’t help yourself, don’t feed the birds before the end of the hunting season in your area. It is illegal to put out food for waterfowl during the hunting season except under permit. Your best food choices are grains like wheat and corn because they keep well outside.

A well-established feeder provides a starting point for other activities with birds. Photography of birds at the feeder can provide hours of enjoyment. If you are taking pictures of birds, watch to see how they use branches as stopping places before they fly to the feeder. Set up your camera to focus on one of the branches for more natural pictures than are possible on the feeder itself. Feeding can be continued through the summer months to attract a different mix of species. You will sometimes be rewarded by local nesting species bringing their young to the feeder. It is interesting to keep records of the birds at your feeder. In Canada, the Long Point Bird Observatory in Port Rowan, Ontario, coordinates Project FeederWatch. In that survey, observers have recorded over 100 different kinds of birds at feeders, and many mammals as well.

Audubon and Cornell Laboratory of Ornithology